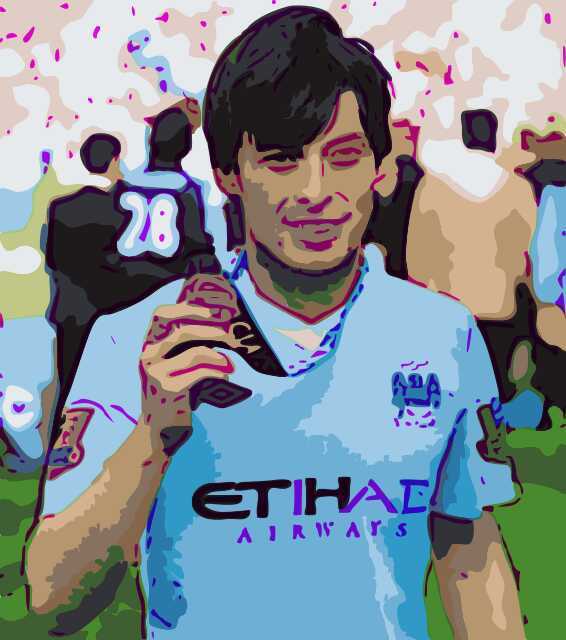 David Silva always frustrated me. As a follower of Liverpool, his greatness at title challengers Manchester City had me exasperated over recent years. Before his Premier League departure, the midfield magician was a consistently brilliant cog in a number of sides that donned the sky blue at the Etihad. Not only was he annoyingly good, he didn’t seem like a player I could learn to hate. He just seemed like a strangely normal, exquisite footballer. Another aspect I had against him? The prang of FOMO.

Fear of missing out was multiplied by hindsight with every mazey run or agile assist tantalisingly churned out by Match of The Day highlights. Back in the 2008/09 season, I learned of a tricky youngster at Valencia. Staring back at an eight year old me from my Match! magazine were rambunctious claims that this wiry looking 23-year-old Silva was heading to my beloved Anfield. ‘Rafa will get him’ my clearly all-too-innocent brain suggested. The common link was of course they were both Spanish. Benitez had also been aware of him when he had coached Valencia in his last job. Alas, he was lured to a newly monied Manchester City. Roberto Mancini had bested Benitez and now looked to have found a crucial piece to City’s trophy puzzle. Looking back, Silva’s tale begins in Gran Canaria.

David Silva was born in 1986 in Arguineguín, Gran Canaria. The son of a municipal police officer and coming from an area widely renowned for fishing, he disregarded both of those occupations for football. Initially, although Silva was small in stature, he began as a goalkeeper at 9. His first club was UD San Fernando. At this club near the tourist haven of Maspalomas, Silva slowly realised being between the sticks wasn’t for him.

After being inspired by Michael Laudrup and fellow Arguineguín native Juan Carlos Valerón, Silva ventured outfield where he was drawn to the wing and exciting attacking positions. At San Fernando, the small midfielder’s new found flair sent word around Gran Canaria and even as far as mainland Spain. Somewhat inevitably, Silva’s skill meant he outgrew his island confines and at 14 he joined Valencia’s youth academy.

After several seasons in the youth set-up and then a term with ‘Valencia B’, the Canarian cut his teeth with his professional debut at 17 on loan at Segunda División Eibar. Following an intriguing formative foray, he went on loan again, this time to Celta Vigo. Playing a useful part in a side that qualified for the UEFA Cup despite just being promoted, Silva earned a starting place back at Valencia. What was even more impressive was a technique seemingly beyond his years. He made his debut at just 20 years old for Los Che, but he was more than comfortable as the side’s creative spark as was made obvious when strutting his stuff against many worthy La Liga opposition.

Turning heads and potent link up in a cult side

Looking back at a young Silva and the Valencia team around him in 2006, it should go down as one of the finest cult sides in the mid to late-2000s. In goal was Santiago Cañizares, a keeper who back in 2004 Peter Schmeichel regarded as “the finest in the world”. Out on the pitch, there was a fine array of youth and experience. Carlos Marchena, David Albelda and Fernando Morientes were ever present. Young bucks like Juan Mata, Raúl Albiol and Éver Banega were making their marks alongside the energetic likes of Joaquín and Miguel Ángel Angulo. However, there’s one name out of this plethora that stands out. David Villa.

Villa joined Valencia in 2005 for a mere €12 million from Real Zaragoza. Silva returned from his loan, a starter in 2006. Putting Silva, a constantly improving on-ball artist and Villa, a potent finisher together, looked to be a match curated in heaven. Add in the dangerous Morientes and it’s no wonder Villa and Valencia scored so many goals. Between Morientes and Villa, the pair amassed an impressive 43 goals in all competitions in 2006/07. Villa and Silva embracing each other in celebration looked to be the poster for their side’s marvellous performances – especially a Copa del Rey victory in 2007/08.

Back to Silva. A glance at the future was perhaps noticed in 2007/08’s ‘Thomas Cook Trophy’ preseason friendly against Manchester City where David Silva scored a head turning goal. Spearheading the attack down the centre of the pitch, Silva drove at Micah Richards. He turned inside and out, muddling the brain of his future teammate before playing in Angulo on the right. His shot was parried by Kasper Schmeichel. Silva cleared up with a simple finish. It wasn’t the strike that was eye catching, it was simply the gravity and pace that Silva manipulated in the build up. It was almost foreboding what the Etihad turf would see in future seasons. Micah Richards is probably still recovering now…

In 2008, Silva would extend his contract by five years. However, between an intrusive ankle injury and eventual departure to England, his career with Los Che would wind down with a third place finish. It begs the question: had he not missed the first three months, would his side have been more competitive? Undoubtedly. He finished the rest of the term with four goals from midfield in 19 matches before a career high of eight the following season before his departure to the blue half of Manchester in 2010.

A brilliant annoyance at City – key performances that reflect greatness

To link back to the start, this is where Silva started to frustrate. Choosing City over Liverpool? Treason. But looking at his first season, even eight year old me would have to admit he did well. After his debut season, he had an FA Cup to his name, had been voted player of the month three consecutive months from October to December and had even been hailed as “the best signing we have made” by teammate Carlos Tevez. Snooded up in the northern English cold, his slinking dribbles and adept passes could warm even the iciest receptions. Instant fan favourite, was David.

2012. You know the score. David Silva went from fan favourite and occasional game winner, to a focal point in Roberto Mancini’s title winning team. Initially starting out as a winger, the Spaniard moved into a trequartista role. He had this vision and grace strong enough to subvert most defensive lines and this season it fully showed. He ended that sophomore victorious term assist leader with 15. In this season, came one of Silva’s admittedly favourite games – City’s 1-6 demolition of Alex Ferguson’s United at Old Trafford.

To beat the Premier League holders was something. But 1-6? At their place? That’s the dictionary definition for a drubbing and Silva played more than his part. He set up the second goal, remarkably chesting a pass through the red defence to Bosnian Edin Džeko. He was involved again in passing moves for two more, before scoring the fifth goal. Bleacher Report’s Adam Hart was stunned – labelling the maestro “two steps ahead of all the United players” and credited him for having “one of the best games of his career” in a Man of the Match display.

Another display that overtly reflected Silva’s input in a City shirt came a few seasons later against Hull City in 2014. The win, described as season defining, was one where City were down to 10 men just 10 minutes in. Vincent Kompany had seen red for a cynical pull back on Nikica Jelavic, but Silva stepped up; as cool and light as the blue of his top. Nine points behind Chelsea and with three games in hand, this was a must win.

The 5ft 7 midfielder grabbed the game by the scruff of the neck. First, he scored a superb strike from outside the area to take the lead. Then, building off a makeshift defensive display from Javi Garcia and Martin Demichelis, he was part of a core that inserted an attacking impetus Hull struggled to deal with. Džeko grabbed the second and City prevailed 0-2. It’s wins like these that define champions, and without yet another MOTM Silva it wouldn’t have been possible.

The final game I wanted to allude to, was City’s 2020 picking apart of now table chasing Newcastle United. It was that strange time, COVID had riddled the world of sport and there were no fans. Yet, the Man City machine still whirred on with the same intent as before. In this match against the Magpies, Silva (34) produced a real throwback showing. As he had announced his departure, this was a swansong of sorts.

Sky Sports lamented that any officials in attendance had seen what the team were going to miss as Silva assisted Gabriel Jesus’ opener before scoring the pick of the bunch. Comfortably 3-0 up, Silva struck a sumptuous free kick to further confirm Newcastle’s demise, before then adding another assist on top. This game at the time was in fact the first time he had scored and assisted since 2016. It was a throwback masterclass in how to cut open opponents with quick and incisive passing.

Subsequently, of course, Silva bowed out after a spell of domestic domination with City. There were a number of shouts as to where he would head next, but the creative mind continued to roll over in a competitive vein as he selected Real Sociedad of La Liga as his next club. Effectively, on departure, he had passed the baton to Kevin De Bruyne – a more than worthy heir. Now is where we approach what seems to be the closing chapter.

I bring you this closing paragraph directly in the present. David Silva is still going at 36. Where once he had the guile and vision to set up the Agüero’s and the Villa’s, he is now surrounded by a new exciting breed. Silva is now the old wise head in the dressing room bustling with the exuberance of Mohamed-Ali Cho, Takefusa Kubo and Ander Barrenetxea. Already experienced players like Mikel Merino and Mikel Oyarzabal can learn more from him. Silva turns 37 on Sunday, when his side face Almeria in La Liga. From this yearning Liverpool fan who missed out on the Spaniard’s greatest by a few odd million, I must wish him the best as a true underrated great of the modern age.