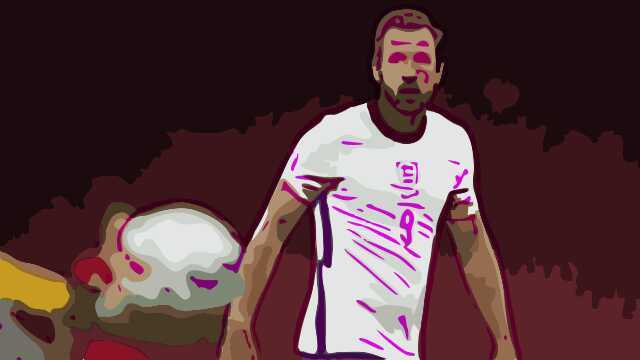 Heading into the World Cup this month, England are favoured by many to go far in the tournament, captained by the ever present and ever prolific striker, Harry Kane.

Kane has had to be patient in his career, as loan moves to Leyton Orient, Millwall, Norwich City and Leicester City came before being given his chance in a Spurs shirt by interim manager, Tim Sherwood. Kane started five of the last six games in the 2013/14 Premier season, scoring three goals and assisting two which lit the flame for the goalscorer we know today.

The Spurs marksman currently has 51 goals for the Three Lions in 75 appearances, just three goals shy of surpassing Wayne Rooney’s record of 53, a tally which took Rooney 45 more games to reach. Kane made a name for himself in the 2014/15 season, scoring 31 goals in all competitions which subsequently led to his first England cap which came against Lithuania at Wembley Stadium in 2015, replacing Rooney from the bench to score just 80 seconds into his debut. Kane was voted PFA Young Player of the Year for that season and was quickly catapulted into stardom, becoming one of the most talked about talents in world football. The 2015/16 season followed the same pattern as Kane won the Premier League Golden Boot, subsequently earning a spot in Roy Hodgson’s England team for the 2016 European Championships. This tournament proved to be disastrous for Hodgson’s England team and Kane particularly, placed on corners and free-kicks without any real plan or strategy which led to their humiliating exit at the hands of minnows Iceland in the round of 16.

When speaking about his use of Kane at the European Championships, Hodgson said to the Express;

“Harry wasn’t scoring goals from set-pieces, he had only one all season at the time. So you want the best deliverer of the ball taking corners because we thought we had a few other players who were good at attacking the ball in the area. There wasn’t a lot of criticism at the time, we weren’t playing too badly. We thought he might be the trump card before the Championships – and he has certainly done it since – but there has to be something to talk about hasn’t there.”

Kane would go on to win back-to-back Golden Boots, scoring more goals than any other Premier League player in the 2016/17 season, thriving from the service of fellow England international Dele Alli and managed excellently by the then Spurs boss, Mauricio Pochettino. Kane and Pochettino’s positive relationship is well-documented, with Kane posting a message on Instagram after Pochettino’s departure from Spurs in 2019;

”Gaffer. I will be forever thankful to you for helping me achieve my dreams. We have had some amazing moments over the last 5 and a half years that I will never forget. You were my manager but my friend as well and I thank you for that relationship. Good luck with your next chapter!”

Kane’s international career started to take shape with the appointment of Gareth Southgate in 2016, as Southgate gave Kane the England captaincy a year later, entrusting Kane with the armband for the first time in a clash against Scotland at Hampden Park. Kane went on to score an added-time equaliser in the game, and hasn’t looked back since.

The World Cup arrived in 2018 and after a string of shortfalls in major tournaments, hopes were low for this England team. These low hopes proved to be wrong though, as England made it all the way to the World Cup semi-finals for the first time since 1990. Spearheaded by Kane, Southgate’s side shocked many with their defensive structure and attacking creativeness, with Kane scoring twice in the opening game against Tunisia, a hat-trick against Panama and penalty in England’s round of 16 triumph against Colombia. These goals earned Kane the Golden Boot, the first time an English player won this award since Gary Lineker in 1986, an impressive feat which Kane will be looking to replicate this month. England were agonisingly close to World Cup glory, but were eliminated by Croatia in extra-time of the semi-finals and after the game, Kane stated to ITV Sport;

“We know we have done everybody proud but we wanted to go on and win it, so we have fallen a bit short. It hurts, I don’t know what else to say, it hurts. It shows we can be up here. We can win knockout games, and we can get to semi-finals, but the next step is to go one further. We have to carry that on. We want more.”

Kane stated that he and his England team wanted more, and they got more three years later at the next major tournament. After being managed by José Mourinho at Spurs, Kane’s playstyle had changed slightly with the striker dropping deeper to receive the ball, releasing the wingers to make their own runs off of Kane. This move was criticised by many fans and pundits alike, but Kane was still recording impressive numbers, coming into the 2020 European Championships off the back of a prolific 2020/21 Premier League season, winning the Golden Boot for the third time with a tally of 23 goals. Despite his red-hot from in the Premier League going into the tournament, Kane started the tournament slowly, unable to find the net in all three group games. Goals came from other sources and England progressed through the group stages to face old foes Germany in the round of 16. With England winning 1-0 as the game crept to it’s conclusion, fans were tense but with four minutes of normal time remaining, Kane ended his goal drought with an inch-perfect header to send the Wembley crowd delirious. Kane would score a brace in the 4-0 thumping of Ukraine in the quarter-finals, along with the decisive extra-time goal against Denmark in the semi-finals which sent England to their first major tournament final since 1966. The final was staged in front of a raucous home crowd at Wembley Stadium, but Kane was kept relatively quiet by the experienced defence of Italy, with centre-backs Giorgio Chiellini and Leonardo Bonucci excellently marshalling their defence to counteract Kane, as Italy won the European Championships after a heart-breaking penalty shootout for the England camp. After the defeat, Kane told ITV Sport;

”Penalties is the worst feeling in the world when you lose. Anyone can miss a penalty. Penalties is penalties. We went through a process and the boys did everything they could, it just wasn’t our night.”

In the aftermath of the tournament, rumours began to circulate surrounding Kane’s future at Tottenham Hotspur after another season without a trophy. The striker was heavily linked with a move to the reigning Premier League champions Manchester City and in a now infamous interview with Gary Neville on his YouTube podcast The Overlap, Kane fuelled the fire regarding a move away from London, stating;

“I think there’s definitely a conversation to be had with the club. I want to be playing in the biggest games, the biggest moments. Like, this season I’m there watching the Champions League, watching the English teams in there doing amazing.”

“When I watch De Bruyne play, he’s a special, special player and some of the balls I see him put in for City are just a striker’s dream if I’m honest. He’s outstanding, an outstanding player with the ball, off the ball, pressing. But his delivery is as good as I’ve ever seen.”

Kevin De Bruyne now has a target of Erling Haaland to aim for, as Kane opted to stay with Spurs and play for current boss, Antonio Conte. Under the stewardship of Conte, Spurs have returned to Champions League action after a two-year hiatus, pipping Arsenal to fourth place in a dramatic conclusion to the 2021/22 season. Kane is also in fine form, scoring ten Premier League goals thus far and sealing qualification to the Champions League round of 16 earlier this week. Kane’s Premier League tally this season is only bettered by the aforementioned Haaland, as the striker’s lofty ambitions may come to fruition with a big few months coming up, including the imminent beginning of the 2022 World Cup.

When speaking on England’s hopes for the upcoming tournament, Kane explained to Channel 4;

“Let’s not forget where we have come from, our first final in nearly 60 years, a semi-final at a World Cup, compared to where we were. It’s no time to panic, understand their frustration of course, we want to win every time we put on an England shirt. We will keep working to try and have a successful World Cup.”

England go into the tournament off the back of a pretty horrid run of international fixtures, winless in their last six outings but with captain Kane ready and available, England will always have a chance of glory and the hope still remains that this team can go one better than last summer’s European Championships. Time is still on England’s side as the core of the team is still very youthful, and Kane will look to propel his team to the very top.