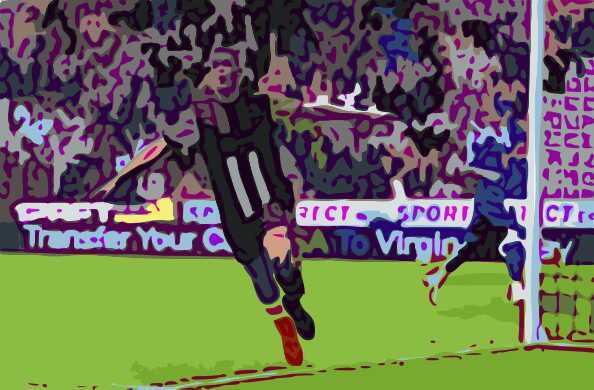 Over the years, there have been plenty of players across the world who failed to reach their true potential. Yannick Bolasie, Ravel Morrison, Michu, and Adel Taarabt, among many others, are all classic examples of footballers who never reached their full potential.

One such player is Frenchman Hatem Ben Arfa, a man with tons of talent and the potential to become one of the greats of French football, if it wasn’t for his poor attitude and work ethic.

This week, I will focus on Hatem Ben Arfa’s time in club football, and how he could’ve been an elite-level player, instead becoming one of the players who’s been labelled in the category of “the streets won’t forget”.

The Frenchman, who is of Tunisian descent, started to make a name for himself at Olympique Lyonnais, where he joined the club at 15.

Following a couple of years in the academy, he was promoted to the senior team along with fellow countryman Karim Benzema. Ben Arfa would often be a substitute during his debut 2004/05 season as he embedded his way into the starting Xl and scored his first goal for the club in November of 2004.

It was during the 2007/08 season that Ben Arfa would get the ball rolling in his career, as he was moved to the left wing. There he got eight goals and six assists in 43 appearances, putting his ability and talents in the spotlight.

After that season, he became the National Union of Professional Footballers (UNFP) Young Player of the Year. However, Benzema often overshadowed his achievements, and the pair would have a rift between them which ultimately soured their relationship. That wouldn’t be the cause of his Lyon exit, though, as his training ground bust-up with defender Sébastien Squillaci created an impasse in his time there.

This frosty relationship with some squad members prompted Ben Arfa to seek a new club. Marseille came calling, and despite Lyon’s attempts to cancel the transfer for a time, the Frenchman moved to the south of France in the summer of 2008.

He carried his goal-scoring form for his new side, as the unique number 20 bagged six goals in his first eleven appearances. Despite this, his reputation for fighting with teammates also carried over to his new team, the first of which was against striker Djibril Cissé.

The second was between him and midfielder Modeste M’bami during the warm-up of their Champions League game against Liverpool, with the pair needing to be separated to avoid escalation. Then, as if that wasn’t enough controversy, he refused to warm up during Marseille’s 4-2 defeat to Paris-Saint-Germain, drawing the ire of manager Eric Gerets. Ben Arfa later apologised for the incident.

Despite his off-the-pitch troubles, he still had his undoubted abilities as he matched his tally from the previous season with eight goals and six assists in 48 appearances throughout the 2008/09 campaign.

His good performances, as well as his troublesome antics, persisted in the following season. The two sides of Ben Arfa came hand-in-hand as he continued to be an influential figure for the team while also being, at times, a massive pain for manager Didier Deschamps.

Despite his troubles with Deschamps, he still played a vital role for the side. This included playing a significant role in Marseille’s 5–1 victory over Valenciennes, getting an assist for the opening goal, and being instrumental in his team’s 6-2 aggregate victory over FC Copenhagen in the UEFA Europa League, scoring in both legs.

The club would go top of the table at the beginning of April and would ultimately stay there for the rest of the season, as they clinched the Ligue 1 title with a 3-1 over Rennes on the 5th of May.

In the summer of 2010, it was reported that Newcastle United was interested in signing the Frenchman, and It wouldn’t be long until Ben Arfa’s agent confirmed the reports. However, despite negotiations about a loan to buy options between the two clubs, it was announced that the Marseille number 10 would stay at the club.

Or at least, that’s what they hoped, as Ben Arfa had no interest in returning to La Commanderie, Marseille’s training facility, and tried to force through a move by travelling to Newcastle without authorisation. However, neither club could get the transfer done, so he had to return to Marseille and sit out the first two games of the new 2010/11 season.

But eventually, on the 27th of August, Ben Arfa eventually got his wish as Marseille confirmed that it had agreed to loan the former the number 10 to the Magpies for the rest of that season, with the loan fee being around £2 million.

After making his debut coming off the bench in a 2-0 home defeat to Blackpool on the 11th of September, he made an immediate impact on his full debut the following week when he scored the winning goal in the Magpie’s 1-0 win against Everton.

However, his season was ultimately cut short after the Frenchman broke his tibia and fibula in the left leg, which occurred when Nigel de Jong produced a heavy challenge on him during a league game against Manchester City.

Despite a lengthy rehabilitation process in France, manager Alan Pardew didn’t want to rush Ben Arfa back into the side and risk injuring him again, resulting in no more appearances for the rest of the season.

At the beginning of the 2011/12 season, after picking up another injury in preseason, it looked as though his campaign would yet again be curtailed by injury. But he eventually got himself fit again and made his Premier League return in late September.

Throughout the first half of the season, however, Ben Arfa couldn’t get onto the scoresheet, and it wouldn’t be until the 26th of December that the Frenchman finally got his first goal of the campaign, finding the net in a 2-0 away victory over Bolton Wanderers. Having eventually gotten off the mark, this gave Ben Arfa the confidence he needed throughout the second half of the season.

He began to show his qualities in England as he would pick up another goal during the Magpie’s 2-1 win against Blackburn Rovers in the FA Cup, a strike which BBC Sport described as ‘magical’.

Although suffering another defeat, Ben Arfa scored again two months later against Arsenal, getting the opening goal before losing 2-1. However, his attacking prowess did eventually lead to victories, including a 3-1 win against West Brom in which the Frenchman got a goal and an assist.

Ben Arfa’s most iconic goal came against Bolton on Easter Monday, and The Independent detailed the effort as a “moment of genius”. After receiving the ball inside his own half, he twisted and turned four Bolton defenders, displaying excellent ball control in the process, and found the back of Ádám Bogdán’s net. His goal broke the deadlock as Pardew’s side ran out 2-0 winners.

The Frenchman’s efforts that season led to Newcastle finishing in a fantastic 5th place and qualification into the Europa League, quite the achievement for the club. His individual performances would lead see him making the France squad for Euro 2012.

Although his preseason wasn’t ideal, Ben Arfa started the 2012/13 season in decent form, given his participation in the European Championships. He scored a penalty during Newscastle’s 2-1 win over Tottenham Hotspur and produced a stunning 25-yard strike to earn the Magpies a 1-1 draw to Aston Villa.

However, injury woes struck again as he was forced off during a Europa League game against Marítimo due to hamstring troubles, keeping him out for over two and a half months. Although he returned to the side during their 2-1 loss to Fulham, in which he got the Magpie’s only goal, he reinjured himself during the game and would be out of action until March 2013.

In the penultimate game of the season, Ben Arfa scored the equaliser in what would be a 2-1 victory against Queens Park Rangers at Loftus Road, keeping the club in the Premier League for next season.

Like the previous campaign, the Frenchman made a brilliant start to the 2013/14 season by getting the winning goal in a 1-0 victory over Fulham and grabbing an assist to earn a 2-1 win against Villa. But after this, he wouldn’t score again until December when he found the net in a 3-0 win over Crystal Palace, which would ultimately be his last goal for the club.

Despite his career at Newcastle falling away, his time in the North East, especially in 2012, would put him in the category of players known as “the streets won’t forget”, with these players known for having excellent short-term spells, but not being to replicate their form in the long term.

In September 2014, Ben Arfa joined Hull City on a season-long loan, but his commitment to football looked to have faded. Having only made ten appearances, he left England in December of that year, which led to his loan being terminated. He was then later released from his Newcastle contract.

He moved to Nice in January 2015, but having already played for two teams in the same season, he had to wait until the beginning of the 2015/16 season to play for the club. Once he did make his debut, however, he would go on to find a new lease on life in France as he grabbed 18 goals and seven assists in all competitions, proving to the world he still had the ability, which made him a joy to watch.

His form caught the eye of Paris-Saint-Germain, who signed him in the summer of 2016. However, despite making 32 appearances that season, he failed to make a significant impact for Unai Emery’s team. He left the club when his contract expired without making a single appearance throughout the 2017/18 campaign.

He later moved to Rennes, where the side won the Coupe de France by defeating PSG in the final on penalties, before playing for Real Valladolid, Bordeaux and Lille. Now at 35, the Frenchman is a free agent, although, given his reputation for his poor attitude and commitment, I doubt he will find another club before retirement.

It’s a sad end to what should’ve been an astonishing career; his abilities on the ball were something to behold, but the ill discipline shown throughout his career is the main downfall. It makes you wonder what sort of career Ben Arfa could’ve had if he had managed to stay out of trouble. I guess we’ll never know.