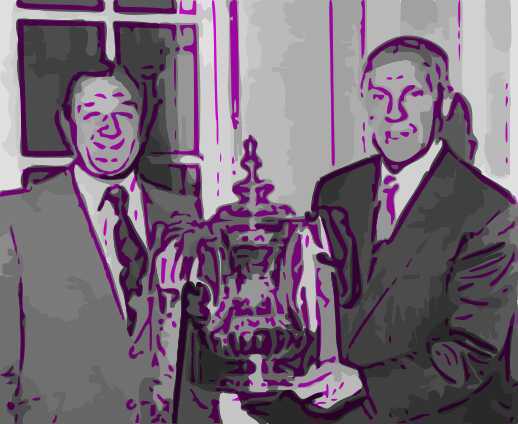 Last time out we examined what happens when a manager leaves a club and his established assistant or ‘Number Two’ takes his job. We looked at the controversial and acrimonious parting of ways between Billy Bonds and Harry Redknapp at West Ham, and before that the events that led to Malcolm Allison taking over from Joe Mercer at Manchester City.

Then there was ‘Big’ Ron Atkinson. In a colourful managerial career spanning a quarter of a century and nearly as many clubs, Atkinson had a fair amount of success, winning trophies at Manchester United, Aston Villa and Sheffield Wednesday. He also produced exciting sides at Cambridge United and West Bromwich Albion. During the course of his career, he had a variety of men he liked to work alongside or employ as coaches or Number Twos, and once or twice they stepped into the gap when he was moved onwards or sidewards.

The first occasion was in 1988 when Atkinson was appointed manager of Atletico Madrid. Leaving his position at West Brom to take up the reins in Spain, Atkinson took his Baggies assistant, Colin Addison, with him. Unfortunately for Atkinson, his spell in Madrid was a very short-lived and turbulent one and after barely three months he was sacked with Addison being installed in his place.

Big Ron was not amused by such perceived treachery and he declared to the media that he had ‘been stabbed in the back,’ and the two men, who had enjoyed a long working relationship, never worked together again. Many years later, Atkinson’s stance on the matter seemed to have softened when he wrote a literal direct contradiction of his earlier comments in his autobiography: “Although it might seem from a distance he had stabbed me in the back, he hadn’t.”

The second occasion was when Atkinson was in the twilight of his managerial career and he ended up at Highfield Road, firefighting for a Coventry City side in danger of relegation from the Premier League. One of his first moves upon being appointed was to install Gordon Strachan as his player-assistant with the idea of grooming him to take over in a few years.

The two men worked together for a while before Strachan started getting itchy feet and angling for the main gig ahead of schedule. Again, Atko wasn’t exactly chuffed at the prospect, and after a short while sulking upstairs as ‘Director of Football’, left the club altogether.

Going back to 1983 and rather a peculiar happenstance occurred at Highbury. Terry Neill had been manager of the Gunners since 1976 and in that time had enjoyed some success, most notably in the cups, with the FA Cup secured and other finals and semi-finals also reached, and yet league success had eluded him, with a 3rd place in 1981 the best he could achieve.

By his side was the vastly experienced and highly-respected figure of Don Howe, whose own Arsenal connections went back to the 1960s, firstly as a player and then as a coach to Bertie Mee’s double-winning side of 1971. After spells coaching and managing elsewhere, Howe was lured back to Highbury by Neill in 1977, and his input on the side’s style of play was both immediate and legendary.

Under Howe’s tutelage, Arsenal swiftly acquired a reputation for being functional rather than flamboyant, and opponents were often ground down rather than blown away. Pretty to watch it wasn’t, but up to a point, effective it was.

By 1983, however, in the absence of any sustained title push, time was running out for Arsenal and Neill and the summer purchase of Charlie Nicholas from Celtic was seen as the last throw of the dice. Here was a statement signing of a highly skillful and flamboyant player, and, it was hoped, a change in the Gunners’ style of play was on the way. Unfortunately, Nicholas took his time to settle in North London and as the winter nights drew in it was apparent that Neill’s metaphorical taxi was being called to the rank.

To nobody’s great surprise, Neill’s services were dispensed with before Christmas and the search was on for a successor. Rather than take the opportunity to simultaneously usher the influential Howe out of the door alongside Neill, the Arsenal board asked him to take over as caretaker-manager before ultimately installing him as permanent manager towards the season’s end.

It was, on the face of it, rather strange that Arsenal should turn to the man blamed in many quarters for the side’s general malaise and the dissatisfaction on the terraces rather than opting for a clean sweep, and neither Neill nor Howe ever really spoke about the parting of the ways in their lifetimes. However, it was rumoured that the Arsenal board kept Howe on in a caretaker capacity as it intended to try and lure either Lawrie McMenemy or Alex Ferguson to the club at the end of the season, and when those overtures proved unsuccessful, they were left with no real choice but to offer Howe the job permanently.

Neill never returned to management, despite only being 41years of age, and largely disappeared from the football scene altogether, while Howe remained in charge at Highbury for another two years before resigning and ultimately being replaced by George Graham.

We started this mini-series with a look at Liverpool and the number of times the succession plan worked well, so perhaps it is only right that we end now with the cautionary tale of the one time when things did not go according to plan.

In 1991, Kenny Dalglish had been manager of Liverpool for five and a half years and had added to his already stellar playing legacy by securing three league titles and two FA Cups to securely lock in his legendary status. By the turn of the year, however, he was feeling the pressure for a variety of reasons, so decided to step down and away from football while he recharged his batteries. Liverpool were, clearly and unsurprisingly, shocked by this turn of events and started to cast around for a successor. At first, the board were keen to explore the possibility of keeping things in-house, with both Alan Hansen and Ronnie Moran sounded out. Hansen flatly ruled himself out, and while Moran stated he was not interested in the job either he did agree to take on the post on a caretaker basis.

Liverpool lurched onwards with Moran in temporary charge for a few weeks without much discernable success as their title charge began to fall apart, and then with just a handful of games left the announcement was made that Graeme Souness had been prised away from his post as manager of Glasgow Rangers.

While this was not technically an appointment from within, it was the next best thing. Souness had played for Liverpool from 1978 to 1984 and had been captain for the last two and a half of those years. He had since enjoyed successful spells playing in Italy and playing and managing in Scotland, and so was a popular choice to replace the departing Dalglish.

Upon taking over at Liverpool, Souness kept Ronnie Moran in place as a coach alongside Roy Evans and also brought Phil Boersma to the club as part of his backroom team. Against most expectations, though, Souness began to struggle at Anfield and was soon under pressure.

The FA Cup was won in his first season, 1991-92, but a final league position of sixth was very disappointing. If the club was willing to give Souness the benefit of the doubt after one season, then halfway through the next he looked to be a dead man walking. Liverpool spent the majority of 1992-93 in the bottom half of the table and at one point hovered just a handful of points above the relegation area.

It was thought that there was no way Souness could survive once the season was over and with Kenny Dalglish seemingly primed to come back, things seemed cut and dried. Then a last-minute change of mind gave Souness a reprieve and an extended contract. This about change came with the double provisio that Boersma’s services be dispensed with and that Roy Evans be officially installed as Assistant Manager. Souness had no option but to agree to these demands and so the club headed into 1993-94 in a state of unease truce.

After a good start that saw three successive victories, Liverpool sat atop the fledging league table but that was as good as things were to get for the Souness-Evans dream team and a miserable autumnal run once more dumped Liverpool back amongst the also rams. When Liverpool were knocked out of the FA Cup by second-flight Bristol City in an Anfield replay in January 1984, it really was the end of the road for Souness and he resigned before he could be sacked.

Evans had no intention of resigning alongside Souness, however, and he was only too delighted to step into the breach offered to him by the Liverpool board. Having joined the Liverpool coaching staff some twenty years earlier as a 25-year-old, Evans had long been seen as a future Liverpool manager-in-waiting and was now finally going to get his chance.

It was seen as a return to Boot Room Values after the abrasiveness of the Souness regime, but instead of leading the club forward to a return to the good old days, Evans was actually less successful than Souness in terms of silverware won with only a solitary League Cup success to show for four seasons in the dugout. It was a rare example of a Liverpool Number Two stepping up and not being able to keep the success going.

How Souness felt about Evans taking on the job upon his departure has not been recorded, and both men have been cordial about the other in public ever since.