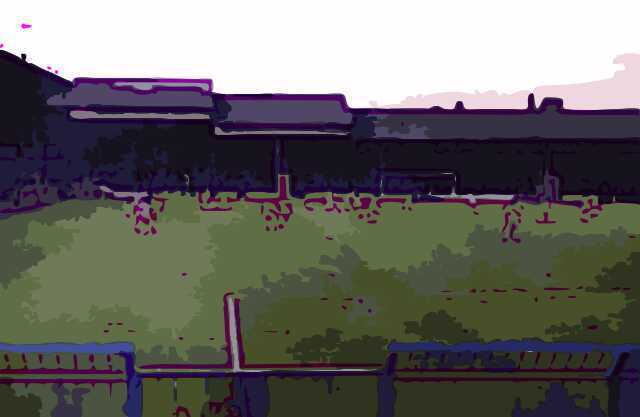 I’ve been watching a lot of The Big Match Revisited of late. With ITV 4’s delightful showing of English football fixtures in a glorious nostalgic haze, I think that iconic theme song reverberates around my brain as much as it has the walls of my living room in recent weeks. My dad and I watch legendary (and perhaps not so) players strut around in their prime, in a time where everything seemed so much simpler. To him, old names bring a smile, like an old friend come to visit. A week ago, we even sat through a 0-0 between Millwall and Portsmouth from December 1974. Thrilling.

Of course, our viewing is fuelled by blatant sentimentality. Yet, even with those old Second Division games – I like to just to just sit and take it all in. At the time of writing, we’ve just watched yet another goalless draw. This time it was Arsenal vs Liverpool. Highbury, 1979. Despite a pitch brimming with Liverpool’s title winning splendour of Dalglish and co. and Arsenal’s FA Cup holding XI, the eye couldn’t help but stray to the stands. It’s packed with 55,000 people. There’s bog roll on the pitch. Over the back of the ground, North London rears its head. That’s where, in large part, a majority of fans have made their weekly pilgrimage from. It’s got me thinking of the importance of stadia.

Now, there’s a lot of written cliché out there. Football religion and churches etc. You get it. I’ve already mentioned a pilgrimage. But still, as my mind rolls over, I’m reminded of my own favourite stadiums. In this article, join me as I reflect on varying aspects like architecture, history and ethos to try and understand just how these sporting arenas can perfectly encompass where they’re from.

Our journey of personal stadium reflection begins closest to home and with my local side. Step 5 Leighton Town play at Bell Close and over the years, this ground on the outskirts of Leighton Buzzard has seen plenty of action. For the club formed in 1885, Bell Close has laid witness to a history predominantly intertwined with semi-professionalism. Aside from cup action, the highest level of football this near-3000 capacity hub has experienced is the Isthmian League. However, with the club comfortably in a new era on the back of continued home support, there’s no reason why previous triumphs can’t be beaten.

In the 2021-22 season, the team in red and white finished fourth in the Spartan South Midlands Football League, yet they trumped the attendance statistics comfortably. The ground is tucked away from the main road of Lake Street and is wedged behind the town’s cricket club. However, Bell Close has been hovering around the level’s attendance summit for effectively four terms now. What has been bubbling under the surface of consistent SSMFL showings is a top fan culture that has seen highs of 524 people. That fan support has been partially responsible for inspiring success.

Now, Town’s ground is of the typical non-league variety. Harsh concrete, with dented corrugated metal. The idiosyncrasies make it. You wouldn’t have it any other way. One main stand of a few hundred and then it’s standing: the Shed End holding prolific acclaim in recent seasons, the clubhouse end full of pint-nursing spectators. Leighton Town have not only become renowned for cult-like home attendances, but solid runs in the FA Vase as well. Also, winning the Bedfordshire Senior Cup last season in Luton has attracted a higher level of talent. People want to watch, players want to play in front of the fine support. Seemingly, the club are heading in the right direction.

Staying in Bedfordshire, but moving six leagues above

Drive 14 miles east from Leighton’s Bell Close and you end up at our next stadium –  Kenilworth Road, home of Championship side Luton Town. As with any follower of the Hatters, Kenilworth Road is well aware of what it is. In a time where many Football League clubs have shiny new stadiums with bolstered capacity and silly sponsor names, Kenilworth Road is an anomaly. Placed amidst Luton’s busy residential streets, it is often the butt of travelling fans’ jokes. I’m not sure why, as personally, I find the place endearing. It IS rough around the edges, but that’s football isn’t it? We can lie to ourselves and gush about the heightened money of the English game and the most manufactured athletes on the pitch, but Kenilworth Road offers a glimpse of reality.

It’s not parallel. There are ‘corporate boxes’ all down one side. Invasive pillars in the family stand Anyone who wants to enter the Oak Road stand has to do so by going through a house front. You can see down the rows of gardens. Years ago, my mum told me of my grandfather and great uncle doing renovations there in the 70s. That, in a way, is perhaps why I hold it so dear. This is a football club in the heart of the community and that truly makes it. Yes, there could be the odd mattress in Beech Path. But this is certainly no soulless bowl.

Under Nathan Jones too, (an example of a manager who really suits a club) the side’s latest fairy tale promotion finish makes the ground an even hotter topic. Luton have been in the first tier before, yet their recent assault on the upper reaches of the Football League from near-administration has rubbed football snobs up the wrong way. At the back end of last season, my Twitter feed was flooded with the dross of the EFL pages. ‘Kenilworth Road could be a Premier League ground next season!’, they’d proclaim.

What’s wrong with that? A throwback to the 1970s, Luton is a matchday experience for the football realist. I feel that with this club, what you see is what you get and that’s not necessarily the case with a lot of clubs these days. Of course, Luton Town have developments in order with a new stadium – Power Court. The 17,500 seater is predicted to be built for the 2024-25 season. Away fans won’t have to pay their yearly visit, but I’m certain it’ll be like the old saying for everyone involved. You don’t know what you’ve got until it’s gone. This final sentiment is especially hard hitting for fans of Coventry City.

Nomads in the Championship

In 2005, Coventry City played their final game at a sold out Highfield Road. Their 106 year tenure concluded with an emphatic 6-2 win against midlands rivals Derby County. Many fans were sad to leave but with the Ricoh Arena waiting in the wings, there was a sense of hope. This was supposed to be a silver lining for a strange time. The decade began blighted by relegation from the Premier League in 2001. A 34 year spell had finally come to an end after 10 relegation scraps. At the time, only Liverpool, Everton and Arsenal could brag of a longer stay in the top flight. You could say the Ricoh Arena was supposed to be the poster boy of transition. However, it would prove more like a problem child in the middle of a failing relationship between fans and owners.

In 2007, Coventry nearly went bust ,but were saved by a last minute takeover by hedge fund company SISU. Two years later, the Ricoh experienced its first sell out crowd with an FA Cup quarter final against Chelsea. This was four years after opening. Admittedly, this former gasworks on the northern outskirts of the city centre didn’t have the same spark as Highfield. It had more capacity at over 32,000, yet from the start its transport links were poor. Government capped parking and a rejected train station plan meant that some fans further afield were somewhat excluded from seeing their team play.

2012’s damning relegation to League One, the lowest they’d stooped for 48 years, wouldn’t be the worst news. 2013 saw SISU further employing their crap brand of ownership as they put a non operating subsidiary into administration. Subsequently, all staff were moved from the stadium and the administrator accepted a bid from the entertainment group Otium. Following negotiations, Coventry agreed to play games at Sixfields in Northampton. That’s just the 78-mile round trip for a ‘home’ fixture.

Following this, the Sky Blues’ rollercoaster ride would see relegation to League Two in 2017, before bouncing back up in 2018. Then, another steep drop came the next year when an agreement couldn’t be found with the then-owners of the Ricoh, Wasps Rugby. In 2019, Coventry were ground-sharing with Birmingham City. Despite this, and a COVID riddled season, Coventry heaved themselves up into the Championship via an ‘Extraordinary General Meeting’. The league decided that although the season was curtailed nine games early, City would be promoted – the result of a calculated final table.

Throw it forward to now. It’s 2022 and we’ve still not reached the end of the saga. Coventry are back playing at the Ricoh, or as it’s now called, The Coventry Building Society Arena. However, Wasps RFC although now defunct, have left Coventry behind in this season’s games. Allowing the rugby sevens at the Commonwealth Games to be played in Coventry alone, made the turf unplayable. The team are behind on games and are languishing near the bottom of the Championship. Even to the time of writing, upcoming fixtures are surrounded by swirling uncertainties between the club, Coventry Council and Arena Coventry Limited. Coventry’s case is one that epitomises the ruthlessness of modern football and the cutthroat nature of stadium ownership gone wrong.