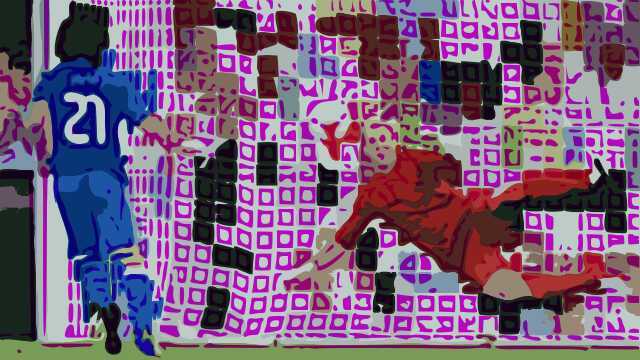 Bulky, gazing cameras pick up a hazy scene in Yugoslavia. Short shorts sit atop tired legs. The black leather boots are heavy with sweat – kissed gently by the white of the Adidas tri-stripe and the paint from the pitch’s lines. Television sets all around Europe, fuzzy with static and excitement, throw out images of the Euro 1976 final with an almost ethereal gleam. The floodlights cut through the timeless glow, illuminating marvellously mustachioed, and side burn-adorned men.

The red jerseys and blue socks of Czechoslovakia pop through the decade’s veil of cigarette smoke and tension. The reigning champions West Germany are traditionally menacing in their white shirts. There have been four goals in this final. The holders have been under the cosh yet have dragged their way back from two goals behind, scoring late on. It’s been a dogged 120 minute showing and now for the first time in a European final, we’re going to penalties to crown our winners.

Names immortalised from the spot

The whistle echoes. The underdogs start first with Marián Masný. Goal. Rainer Bonhof levels. The minutes pass, as do five more successful kicks. A weathered Uli Hoeneß is up next. He’s been through the ringer. Although featuring in a Bayern side that had won the European Cup the season prior, Hoeneß has been off the pace. A nasty knee injury inflicted by a grizzly tackle from Leeds’ Frank Gray has left him slightly a shadow of his previous self and perhaps overlooked. Just 17 Bundesliga appearances as Die Roten finish third. He has scored just four goals. Tuck this away though and it’s all forgotten – back in the game. With eight on his back, he traipses forward. He runs towards the ball. Ivo Viktor dives to his left but it’s fine. Hoeneß’ penalty balloons over and caps an awful spell for the forward.

Czechoslovakia have the chance to win it. Unfortunately for West Germany, Antonín Panenka has been waiting in the wings – with a glimmer in his eye and a trick up his sleeve. He sprints at the ball. Sepp Maier is the last straining finger as West Germany’s grasp on the trophy is slipping. Panenka slightly opens his body and Maier dives to his left. He’s fallen for it hook, line and sinker and the ball glides over him into the middle of the goal. Wow. With opposition bereft, Panenka has his arms aloft. Soon it’ll be the trophy for  Czechoslovakia’s first and only European triumph. Unknowingly, Panenka has seared his name across world football’s collective brain for decades to come.

Return to the present. You’ve heard that story before or must’ve at least seen someone try to replicate it. Panenka’s penalty truly sent ripples through the sport. Yet, it wasn’t just a spur of the moment, blast of creativity. Oh no. This was just the world’s first real glimpse of the Czechoslovakian star.

The cherry on top of a perhaps underrated career

Antonín Panenka was born in Prague and staked his claim as a fan favourite with his beloved Bohemians Praha. The iron curtain had blocked out the sheer brightness of the midfielder’s creativity from his debut in 1968 all but completely until 1976’s Euros. After 14 years with his boyhood club and a great 76 goals in 230 appearances, Rapid Wien lured him to the Austrian capital. Inspired by his continued Euro exploits of 1980, Rapid also had fallen for his constant creative threat. To scouts, the then-Czechoslovak player of the year seemed the epitome of his position. There was the innate passing ability. The gift of control and elegance. He was also lethal from dead ball scenarios, scoring many a free kick.

Four years in Vienna enabled Panenka to get his hands on domestic silverware five times – with two consecutive Austrian Bundesliga titles in 1982 and ’83 and then a string of three Austrian cups from 1983-85. Where previously he had been the starring role in a squad that was often overpowered by the likes of Spartak Trnava and Slovan Bratislava, he was now involved in a capable trophy-getting team. As with Bohemians 1905, Panenka developed into a cult player with fans. He amassed 127 appearances, scoring a remarkable 63 goals. After this, Austria became home as he wound down his career with VSE Pölten and then teams in the lower divisions. He retired from club football in 1993 before eventually taking on the role of Bohemians’ president.

Inspiring the good, the bad and the downright ridiculous

As you can imagine, to attempt a Panenka penalty, a player must have balls of steel. Since its first outing, the style of spot kick has been attempted many times. The payoff is huge, yet so is the potential embarrassment of getting it wrong. On watching the penalty, the great Pelé was dumbfounded. He was baffled as to whether the Czechoslovakian was “either a genius or a madman.” I like to think it was a little bit of both.

“I saw myself as an entertainer and I saw this penalty as a reflection of my personality. I wanted to give the fans something new to see, to create something that would get them talking.”

This penalty was ultimately an amalgamation of the midfielder’s great attributes and a poster child for his uncanny ability. As mentioned earlier, he had a knack for the dead ball, but on the move he could also produce the most unorthodox, brilliant finishes. For instance, grainy black and white training footage from his Rapid Vienna days shows him darting onto a through ball. His mop of brown hair flows erratically with every stride. Now one-on-one, the muddy turf kicks the ball up unexpectedly. However, rather than blasting a ferocious volley or a low drive, he leans back nonchalantly and reclines into a delicate lob. The ball dips exquisitely over the goalie’s head and just under the bar.

With the technique’s history, there are inevitably polar opposites. Success and failure split the so-called geniuses from the madmen in seconds. When thinking of converted Panenkas, the brain immediately telegraphs the might of an ageing Zinedine Zidane in 2006, or perhaps the grace of Andrea Pirlo in 2012.

When a players misses, or has a naff effort easily saved, it can result in ultimate embarrassment. Take Gary Lineker for example and his awful effort in 1992. He needed just one goal to beat Sir Bobby Charlton’s England scoring record. Gifted the perfect opportunity, he then fluffed it straight into the welcoming arms of Carlos Gallo. What was even worse was that Lineker wouldn’t bag another Three Lions goal before his international retirement. Shame about that record, eh.

In attempting his soon-to-be trademark, Panenka himself, had not only risked the European Championship win, but he had also inadvertently put his freedom on the line. After the celebratory, no-doubt drunken mist had cleared back in ’76, the match winner was informed that if he had missed that kick, it would’ve been seen as disrespect to the Communist regime back home. His punishment? “30 years down the mines”, Panenka bluntly replied to Ben Lyttleton for his book ‘Twelve Yards’.

Good thing he scored then – not that there was any doubt from Panenka. Allegedly, it had taken two years to master that chipped penalty. From testing Bohemians’ keeper Zdenek Hruska in training drills built on wagers of beer and chocolate, to competitive matches where so much more was on the line – Panenka developed and pulled off this sheer moment of brilliance. Rightfully, his legacy lives on with this namesake technique. His moment is bookmarked in the growing catalogue that compounds a constant European Championship romance. It was indeed, one of the most jaw-dropping ways to ultimately grasp victory – in a pulsating dalliance with defeat and dejection right at the death.