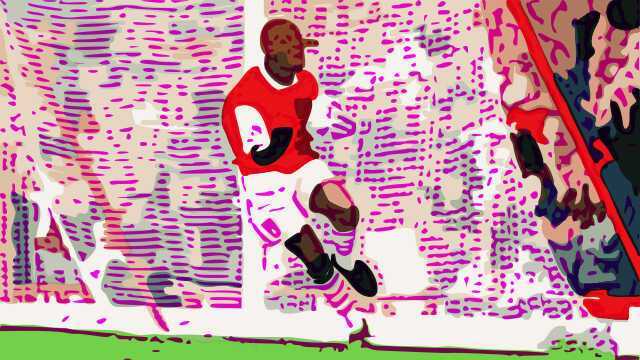 There have been plenty of stories of footballers who fought tooth and nail to turn their dream of playing professional football into reality.

One of the most well-known stories of this nature is that of Ian Wright, a man who had to get into football the hard way and continued to fight and work hard every day to stay at the top.

Once he established himself as a striker, he would become a legend for the likes of Crystal Palace and Arsenal, and of the Premier League as a whole. This week’s piece will focus on Wright’s club career in football and how he overcame his problems to make it to the big time.

Whilst growing up, not only did he have to contend with his birth father being mainly absent from his life, he also had to deal with an abusive stepfather. This affected him deeply and is something that he still deals with today.

Despite his obvious talents, it would take quite a while for him to get into professional football, as trials at Southend United and Brighton and Hove Albion yielded no results in terms of a professional contract.

This led to him playing for amateur and non-League teams during his youth; he believed his chances of becoming a professional footballer had faded and thought he would never reach the heights of his long-time friend David Rocastle, who Arsenal had signed after being part of their academy.

Whilst growing up, on top of expecting his first child with his first wife, Wright got into trouble with the law and would spend two weeks in prison for failing to pay fines in relation to driving without tax or insurance. It would be the lowest point of his life.

His school teacher Sydney Pidgen played a vital role in his youth, as he was the first positive male father figure he had, helping him to steer clear of a life of crime and become a better person.

Throughout his teenage years in football, the future Arsenal striker played for Ten-em-Bee, a Bermondsey-based amateur Sunday league club. The first club where he would earn money was the semi-professional outfit Greenwich Borough, where he made £30 a week.

Semi-professional outfits were and still are used to scout young and up-and-coming talent, and after playing just a handful of games for the side, Wright was spotted by Crystal Palace scouts and was given a trial by the club at Selhurst Park.

Steve Coppell, then manager of the South London outfit, was impressed with Wright’s performance in the trial and signed him to a professional contract for the club in August 1985.

It didn’t take long for him to make his mark for the side, as he scored nine goals to finish as Palace’s second-highest scorer that season. However, it was the arrival of the summer signing Mark Bright that really got his goalscoring form going. The pair clicked well as they combined to score a bucket load of goals, to earn Palace promotion to the first division via the playoffs. During that season, the forward scored 24 goals in the league and a total of 33 in all competitions.

In 1989, England came calling as Wright would be drafted into the B team of the national side. However, his first season in the top flight was limited due to a shin bone injury. But in May 1990, Crystal Palace made it to the FA Cup final as they faced Sir Alex Ferguson’s Manchester United team. It was a game that Wright didn’t want to miss, and he would do everything possible to be fit for the final.

Although he didn’t make it into the starting Xl, he was declared fit enough for the bench and with his side 1-0 down, Coppell brought on Wright to try and change the game and to get Palace back into the tie. He did just that when he scored to make it 1-1 to send the Palace side of Wembley crazy.

He then scored again in extra time to give his side a 2-1 lead, and for a brief moment, it looked like the historic trophy would be heading to South London. However, United fought back to draw the game 3-3, setting up a replay in which United would win 1-0.

In the following campaign, Wright earned his first full cap as an England player and reached the one-hundred club for Palace, scoring 100 goals as the South London side achieved an astonishing feat of finishing third place in the top flight. On top of this, they also beat Everton 4-1 to win the Full Members Cup, as Wright scored twice to help them on their way to success.

By now, everyone knew about the striker and his dangerous abilities in the attack. Nowhere would this be evident than during the Eagle’s dominant 4-1 victory over Wimbledon in which Wright scored an 18-minute hat-trick.

Throughout his six seasons with the Eagles, he scored 117 goals in 253 starts and 24 substitute appearances, cementing himself among the legends of the South London outfit.

Arsenal – Writing his name in glory

In September of 1991, Arsenal got their man as Wright signed for the North London outfit for a record fee of £2.5 million, joining up with his childhood friend Rocastle in the attack.

During his debut season, he made an immediate impact for the Gunners as he scored 31 goals in all competitions during the 91/92 season, 29 of which were in the league, which was enough to earn him the golden boot.

Although Rocastle left for Leeds United the following year, Wright would continue his goalscoring form and become the club’s top scorer for six straight seasons.

His impact on Arsenal during the early 90s was sensational, as his goals and attacking threat earned the North London outfit an FA and League Cup double in the 92/93 campaign. Wright also played a vital role in helping the Gunners reach the 1994 Cup Winners Cup final, but despite Arsenal winning 1-0 against Parma, he would play no part in the final due to suspension.

However, despite his goalscoring form in the league, as well as scoring in every round except the final of next season’s Cup Winners Cup final (which they ultimately lost) Goerge Graham would lose his job due to illegal payments and the club finished in a disappointing 12th place under the caretaker management of Stewart Houston.

Things didn’t get better for Wright as Bruce Rioch arrived at the club. The pair had an infamous falling out, resulting in the striker handing in a transfer request, which he later retracted.

When Dutch attacker Dennis Bergkamp signed for the Gunners in 1995, the pair struck up a brilliant attacking fluency similarly to Wright’s palace days with Bright, as Rioch and his men would finish 5th in the league and earn them a place in the UEFA Cup during the 95/96 campaign.

The arrival of Arsene Wenger in 1996 brought a new lease on life at Highbury, as his revolutionary ideals on football would start to take shape. Wright was 33 years old when the Frenchman turned up, but was still scoring on a regular basis.

It was also the season when he set a new record in which he scored against 17 of Arsenal’s 19 opponents, a feat that Dutch striker Robin Van Persie would match in 2012.

However, this would be overlooked by an even more impressive record for the Gunners. On 13 September 1997, Wright scored his 179th goal as he broke Cliff Bastin’s previous record of 178,  to become the club’s highest-ever goalscorer. Scoring a hat-trick against Bolton Wanderers, he celebrated by lifting his shirt, revealing a t-shirt with the words “Just Done It”.

Injuries would hamper his 97/98 campaign as his appearances dwindled throughout the second half of that season. During this time, the Gunners were eliminated from the League Cup, spoiling their hopes of a fantastic domestic treble-winning season. But he would get to lift his first Premier League title as Wenger’s men achieved an amazing league and cup double.

Overall, his goalscoring spree at Arsenal totalled 185 goals from 288 appearances from 279 starts. Becoming the record goalscorer until Thierry Henry broke the record in 2005, earning his status as an icon in the hearts of the Gunners faithful.

West Ham United called, and Wright moved to the East side of London in July 1998 for £500,000. Spending 15 months there, he scored the winner on his debut against Sheffield Wednesday, but he didn’t reach the same level of form as he had with Arsenal.

He would make the headlines once again for the Hammers, but this time in the complete opposite way as, after getting sent off during a game against Leeds United, the striker took his frustrations out in the referee’s dressing room and completely destroyed it.

After his time at West Ham, Wright would have similar short-term spells with Celtic, Nottingham Forest and Burnley, before finally calling an end to his playing career in the year 2000.

Regarding his international career, he only started 17 times throughout his 33 outings for the Three Lions.

He scored nine times for England, but despite Wright’s goalscoring feats for his clubs, he only managed to get three consecutive starts as he was always in and out of the team for various reasons.

However, getting into the England team was an achievement in itself, given how late his career had blossomed. Moreover, it was a testament to how hard Wright had worked to get to the top after his struggles during childhood and the seemingly elusive hopes of reaching professional football.

His story proves that anyone can make it in the big time regardless of where they start, and it is something youngsters can use as inspiration if they want to make it as a professional footballer.