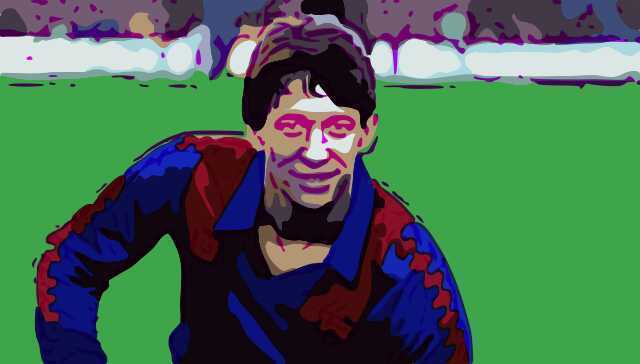 Although there have been some recent successes of British players abroad, there is a particular absence of young talent from these shores who take the leap overseas. Alternatively, over the decades there have been various successful applicants who have established themselves within the foreign experiences of alternative native leagues. One particularly British overseas story that comes to mind is Gary Lineker.

By the time of his move abroad, Lineker had become a household name within the English game. Beginning his career within his hometown at Leicester City, he slowly became a fan-favourite, and burst onto the scene after his first professional goal in the Second Division on New Year’s Day in 1979, helping his club to promotion into the First Division a year later in just his second professional season. However, this stint came with highs and lows, as he was then part of a side that found themselves subsequently relegated the next season.

This was Lineker’s chance to prove himself as a more predominant figure in a team that needed someone to take control and steer The Foxes back in the right direction. Significant performances landed him his first England call-up in 1984, coinciding with his first season back in the First Division, this time as a prolific starter for his club. As a result, this helped him become the second-highest scorer in the division with 22 goals, and he quickly rose to stardom from here.  The following year Linker continued his prolific form, on this occasion going two goals higher in the scoring charts of the 84/85 season with 24 Division goals. This simultaneously raised the question of whether or not Leicester – who at the time were unable to reach the heights of the top clubs, regardless of Lineker’s goals – were now the right club for him or not.

Enter Everton. Lineker, now 25, was reaching the top of the game, and was being put out there with England’s best players. As a result, his big money £800,000 move to the blue part of Merseyside also bought with its expectations, the first time where such pressure had been put on his career. And he did not disappoint, with 40 goals in 57 games. He continued to break records, making his mark as a top scorer yet again, this time with 30 goals in the league, as well as a goal in the FA Cup Final. His big break abroad was coming. Then it came.

The 1986 World Cup had come and gone, and the local Leicester man had become the Golden Boot winner in Mexico. Now on the radar of some of the world’s top clubs, the desired move to expand his career came at the peak of his career. The destination…

Catalonia was the location for the £2.8 million transfer of the former Leicester and Everton player. Barca’s second-highest transfer fee at that time, only behind the legendary Diego Maradona. Here was a chance to continue his prolific goalscoring form in a new league, new country and the chance to add his name to the history books on the east coast of Spain.

Factors aiding his move were helped by the then Barcelona coach Terry Venables (previously of Queens Park Rangers), and the announcement of the signing of fellow Brit Mark Hughes from Manchester United. The World Cup Golden Boot winner had arrived at Camp Nou, and many expected big things. Now it was his time to express his talent on the European stage.

Instantly the pressure was felt, with Lineker having to absorb an electric atmosphere produced by 65,000 fans just for their new signing presentations at Camp Nou, before even a competitive ball had been kicked. In a 2002 interview, Lineker stated that

‘The pressure is different. It’s a huge club, it’s a giant and there’s enormous amount of pressure on all the players… We often hear about the pressure on players here but it’s something else at Barca’.

Thankfully for him, he produced the goods, immediately getting off the mark by scoring a brace on his debut in La Liga against Racing Santander. Overall, across his first season of 41 appearances, the Englishman scored a respectable 21 goals.

Some of these are still fondly remembered today, in particular his historic hat trick against title rivals Real Madrid which would go down as arguably one of his most memorable moments across his three-year tenure. It was the first El Clasico of 1987, a sold-out Camp Nou played host to the second match-up of these two rivals of that season. Barcelona 3 – Real Madrid 2. The score that put Lineker into the Catalonian folklore. Etched into the legends of Barcelona and El Clasico history. Speaking to La Liga TV,

‘I scored two goals in the first five minutes, and the noise… the crescendo in Camp Nou was just something that I’ll never, ever forget. I had goosebumps all over my body when I scored the second goal because the place was going crazy’.

For the third goal, goalkeeper Adoni Zubizarreta launched the ball long shortly after the break, which was failed to be cleared by Real defender Chendo, leading to a clear opportunity for the hat-trick, which the number 8 took with a composed finish over the Los Blancos keeper. He had done it.

‘I’ve scored a hat-trick in a Clasico… in my first proper home Clasico… and I just couldn’t believe what was happening’.

A moment of magic enough to win them the Clasico, however, Barca were unable to clinch the title regardless, missing out by a single point as the La Liga title went to Los Blancos in the Spanish Capital. Nevertheless, Lineker remains the only Englishman to score a hat-trick in El Clasico.

While Linker didn’t lift the La Liga trophy that season, he did win silverware such as the Copa Del Rey (The King’s Cup) and the European Cup Winner’s Cup during his time with Barca. However, this came under a coach who will forever be remembered as one of the greatest minds of the game’s long history, that, unfortunately for Lineker, did not involve him playing centrally as he would have liked.

Johan Cruyff is known as one of the most influential personalities in the history of football. His appointment as Barcelona’s Head Coach for the 1988/89 campaign brought many positive emotions to Camp Nou. Conversely for Lineker, this didn’t work in the Englishman’s favour. Although stating that he was happy with the Dutchman’s plans, the problem arose that he was not playing in the position to which he was accustomed. Cruyff became keen on the idea of playing Lineker on the right-hand side of midfield as opposed to his usual central position.

As a result, he found himself – for the first time in his career – in a slightly confusing state of mind as to the fact he was not where he wanted to be playing. Simultaneously, the Blaugrana’s second most expensive signing eventually became no longer an automatic choice.

This was mirrored by his appearance and minutes statistics, as in each of his three years in Catalonia, both respective figures declined (having played 11 matches less in his final year than when he joined following the World Cup). Additionally, his goals matched this negative correlation also (scoring 10 goals less than his debut campaign).

Overall, Lineker’s time in Barcelona can be seen as a general success, and with memorable moments such as his El Clasico hat-trick of ‘87, he can be seen as a key player in a team winning the Copa Del Rey, Cup Winner’s Cup, Mundial Golden Boot, Pichichi Trophy.

Over these three years, the Englishman gained valuable experience and played with some of the best players in Europe at that time, such as Eusebio, Julio Alberto, Zubizaretta, and ‘Txiki’ Begiristain to name just a few. Despite his influence dwindling under Cruyff, if you were to check which club Lineker played the most games for, it is in fact Barcelona.

The now retired OBE has since reflected on his time wearing the famous red and blue, and has stated in recent times how Barcelona was where he developed into the player he always ‘hoped he’d be’. Following on from the El Clasico hat trick of ’87, eighteen days later, he scored four for England against Spain at the Bernabéu. “And that,” he says, “is when it dawned on me that I was good at this.” The initial uncertainty around his move away from Everton was soon removed, as the just crowned World Cup Golden Boot winner settled into life in Spain.

‘The opportunity to live in a different county, to experience a different kind of football, to educate myself on the field and off the field, the opportunity to learn another language… and to try something new and exciting. So, there were all sorts of reasons but the main one obviously was that it’s Barcelona Football Club. You don’t say no.’

And it was a good job he didn’t, as those three years will be memorable for himself and the many Barcelona fans around the world. It was a good move for a high-profile English player, as it came during a period when top British players tended to sustain their careers in the UK. A time of mixed emotions, but a time of success and experiences that contributed to a memorable part of a great career.