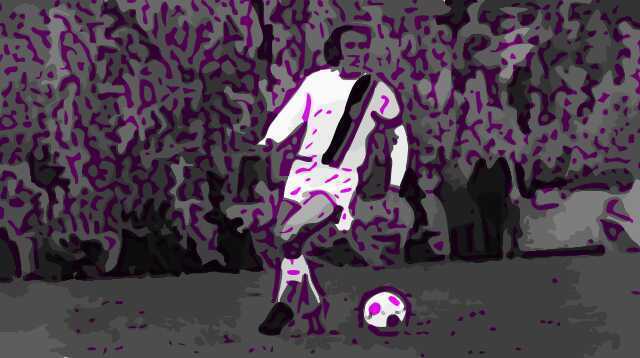 On May 18 1974, a shady-looking character entered the fray at ZDF’s SportStudio, a German football channel, to test his luck at the goal wall. The aim of the game was simple. To kick the ball into the targets in the goal as often as possible. Dressed in a leather jacket; clad with boots and long, meandering blonde hair, the guest rendered a placidness as he tucked away his first five shots with relative ease.

It was a success rate unreplicated on the show… A ZDF record.

Rubbernecks to the performance in recent times will most likely still view the character on the show with an implication of ignorance. “Who is this genius?” you ask yourself as you watch it. “This guy would be perfect for my team,” you claim. “How have I never seen this?” you contemplate.

This should’ve never been the case with Günter Netzer; we should all know who he is.

At the time of the program, Netzer, who had battened down the hatches on a vastly successful playing career with Bundesliga giants Borussia Mönchengladbach just one year before, later signing for Miguel Muñoz’s Real Madrid, should have been limbering up as the life and soul of what was popularly believed to be the best German side of all time in the years leading up to the 1974 World Cup.

Instead, his reputation was dwindling.

After being the primary visionary cog in the 1972 European Championship-winning West German team, Netzer was a founding architect of the Ramba-Zamba-Fußball philosophy that brandished the nation as the darlings of European football – an antidote to the defensive, dirty play elsewhere.

Before Michel Platini and Zinedine Zidane, there was Günter Netzer. But while he was Der Superstar in 1972’s great squad, he was eclipsed by Helmut Schön’s partisanship with FC Köln’s Wolfgang Overath in the following years. His 37 international caps discredited the panache the German hero exhibited on the pitch. And three years after he had stunned the ZDF studio with his pinpoint accuracy, his career came to an end.

Suitably, on his sixth and final shot at the goal wall, he narrowly missed the target. It became a moment in the show comparable to his career. All the ingredients were there for the German to spell out his talents into accolades, but it never came, as he scuffed his chance at the final hurdle.

The stellar adroitness of Netzer should not be neglected among other German sensations, though, so this article – like the objective of the goal wall – is simple. We want to remind our readers of just how good the German Footballer of the Year in 1972 and 1973 was at his zenith.

Günter Netzer: The incarnation of a perfect no.10 who was overshadowed by the depth of Ramba-Zamba talent on the international stage

Great attacking midfielders possess the vision, agility, and creative instinct to produce game-deciding moments out of nothing. From the elegant dribbling tendencies of Andrés Iniesta and Diego Maradona to the intricate passing ability of Andrea Pirlo and Gianni Rivera, some no.10’s also demonstrate a knack for scoring long-range thunderbolts like Gheorghe Hagi and Ferenc Puskas.

To be named alongside any of the superstars listed above would be meritable. So it is with pleasure that Netzer fits the bill. There is footage of the German midfielder pinging 50-yard diagonal balls that loop over defences, reaching their intended target, maze-like runs that ride multiple challenges, and left-footed missiles that burst the net. Netzer was the complete no.10, and he could be aligned with the multifaceted poetry of Johan Cruyff’s grey matter.

By all means, the Dutchman is in a world of his own. Nobody will ever imitate Cruyff’s total football artistry. But in his own way, Netzer was a complete no.10 himself. He was a ball-playing, tempo-dictating midfield maestro that went toe-to-toe with Franz Beckenbauer and Gerd Müller’s Bayern Munich amidst the Bundesliga golden age.

The rivalry between Bayern Munich and Gladbach was depicted as King Kong versus Godzilla at the time. Between 1969 and 1977, the two German sides dominated the Bundesliga, with Netzer’s side picking up five league titles to Beckenbauer’s four – while Bayern consolidated their superiority on the continent with three European Cups.

When the two met in domestic competitions – it made for a congenial and often impassioned occasion. For Bayern, their squad consisted of Beckenbauer, Gerd Müller, Paul Breitner, and Uli Hoeneß. And for the Foals, nicknamed due to their young side’s swashbuckling style of football, there was Netzer, accompanied by the distinctive talents of Berti Vogts, Sepp Maier, and Jupp Heynckes.

But between the two sides, it was Netzer and Beckenbauer who stood head and shoulders above the rest in the heat of a feigned animosity. And the same duo took their differences onto the international stage, with Schön refusing to play both of them at the same time, despite playing in contrasting positions.

Disparagingly, the two personalities also clashed. Beckenbauer, as his nickname Der Kaiser suggested, was a conservative character. Meanwhile, Netzer lacked modesty to the point of arrogance. His love for beautiful women and fast cars was an attribute in his personality that could have also prevented his progress on the international stage.

Before his meteoric rise and crumbling fall in the West German setup, though, he had unfinished business as a Mönchengladbach hall-of-famer.

Netzer plied his trade for 1. FC Mönchengladbach from eight to nineteen years old before he switched allegiances to city rivals Borussia Mönchengladbach in 1963. He scored on his debut against Rot-Weiß Oberhausen and quickly established himself as a first-team regular, helping the club win promotion to the Bundesliga in 1965.

As an all-rounded attacking midfielder, the German was a stalwart in the young side, scoring 82 goals in 230 Bundesliga appearances. His natural ability, married with his never-say-die attitude, was polished with a unique leadership ability that projected onto the players around him to build a well-oiled machine on the north of the Rhine.

Under the laissez-faire dabbling of coach Hennes Weisweiler, he orchestrated the midfield output in his Bundesliga playing days, earning the nickname ‘Karajan’, after the famous Austrian conductor Herbert Von Karajan.

His most successful years came in 1970 and 1971 when he helped Gladbach to back-to-back Bundesliga-winning campaigns, picking up German Footballer of the Year in 72 and 73 along the way. In his final season in Germany, he pocketed cult hero status with an almost mythological cameo in the DFB Pokal final – his last outing for the white, black and green of Borussia Mönchengladbach.

Rebel rebel, I love you so…

Genuinely viewed as one of THE great German Cup finals of all time, Netzer’s Coup De Grace came in the 1973 DFB Pokal final against FC Köln. As news circled that Netzer was off to Real Madrid in the summer, Weisweiler left his starman on the bench, which would lead you to believe now that this story is going down a cul de sac.

With the game poised and ready to be taken by the scruff of the neck at one apiece at halftime, he was asked to come on. Netzer refused and responded dejectedly, “they don’t need me”. So Netzer remained on the sidelines, fretting and sullen. At this point, all hopes of a Netzer swansong were fading, despite the crowd bellowing “Netzer! Netzer! Netzer!” at the top of their lungs.

During extra time, though, the tides had changed. After an exodus of teammates through cramps and injuries, including cries from Christian Kulik, Netzer waltzed over to his manager and muttered “Ich spiel dann jetzt” (I’ll go and play now). So as the curtain drew on Netzer’s days in Germany, he peaked through one last time to inscribe himself into German Cup final history.

With just his second involvement of the night, the maestro drew the defence out with an enchanting turn just inside the Köln half, accelerated, and initiated a give-and-go, heading into the space he had initially created. A left-footed blast high into the net won the game, embellishing the 1973 edition of the DFB Pokal as ‘The Netzer Final’.

It was fair to say that the hometown hero’s parting gift went down well. Jubilation ensued, Netzer was bundled over by his teammates, and everything was swell for the then 30-year-old. And to top things off, he was en route to sunny Madrid to live out his dreams.

Unfortunately, the farewell to his city of birth also meant goodbye to the Netzer we should remember. Whereas he was a valued member of the 1972 European Championship-winning West German squad, he faded out of existence before the 1974 World Cup. The rise and fall of his international career was similar to his club journey from Gladbach to Madrid.

Netzer dazzled at Euro ’72, playing a spotlight role in Nationalmannschaft’s first-ever Wembley victory at the quarter-final stage, later oozing class to form an unbreakable bond with Müller to sweep finals hosts Belgium and the Soviet Union under the rug to lift the trophy.

Opponents could not handle the creativity and verve of Netzer – then 27 – and Beckenbauer, who took turns in driving the ball forward. “We didn’t get these instructions from the coach,” the hubristic Netzer said later. “We just did that ourselves on the pitch and it worked.”

The performances they put on during the tournament should be replayed with some sexy, flamboyant jazz music that most definitely features a long, adhering saxophone solo – best watched with a bottle of fizz in one hand and a cigar in the other.

But although Netzer shone through as one of the best to do it in the Ramba-Zamba age, it seemed that Schön had only selected the Gladbach general because of Overath’s absence due to injury. The fact was, Schön, arguably despicably, also didn’t fancy a tactic that played Beckenbauer and Netzer at the same time, despite the duo proving they were more than worthy of playing together at the European Championships.

In his international career, Netzer finished with a paltry 37 caps. In the 1974 World Cup, he only played 20 minutes, coming in West Germany’s most infamous losses in the tournament. Still, the car-loving playboy earned two winning medals for his troubles as an international player.

Legacy of a legend we had forgotten about

For those who were able to rewatch ZDF’s goal wall video and recognise the rebellious, blonde-maned stud that was Günter Netzer – we envy you. In his own right, the German was one of the best attacking midfielders of all time, who failed to reach the status of an everlasting football phenomenon because of the sheer quality of international players around him.

We guess you could compare him to Trent Alexander-Arnold in that sense. While he continues to flourish as a club superstar, it remains to be seen how far his international endeavours can take him.

Nevertheless, it didn’t help that Netzer was never the same when he left for Real Madrid. Despite Los Blancos signing him in the panic of Barcelona’s Johan Cruyff acquisition, the German, who was 30 by the time he relocated, couldn’t compete with the Dutchman. While the reasoning remains relatively unknown, Netzer claimed that his playing style wasn’t catered for during his time in the Spanish capital.

He added two Copa Del Rey’s and a La Liga title to his collection during three years at the world’s biggest club, but his personal output wasn’t as extraordinary as it once was.

As a player, he will always be remembered as a founding member of the Ramba-Zamba-Fußball philosophy that engulfed Germany in the 70s, but it still persists disappointing that we may have never seen Netzer reach his full potential. There were glimpses of it for sure, and that’s why he is even being mentioned in the first place – but imagine if he had stayed in his hometown.

Netzer’s cold-blooded thirst for victory is rarely present in the modern game, and his individualism, rebellious demeanour, and flawless performances in the early 70s make him an unheralded genius.