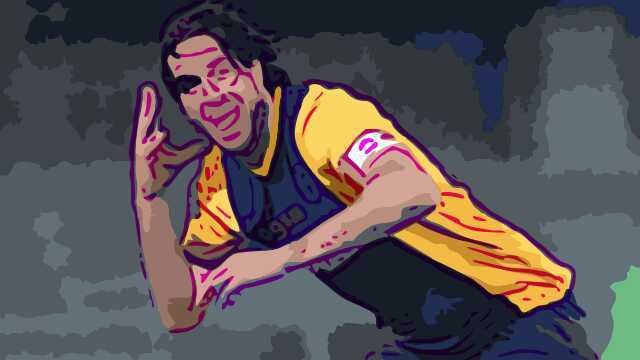 A nomad roams. On entry to the cattle town, this trigger happy silhouette swings open the saloon doors. They clatter and swing. The heads turn. His reputation murmurs around the dusty room. Will he make his mark? Or will he be given the bum’s rush? The harsh sun beats down mirroring the heat of his new found audience’s intense gaze. The tension is rife and inescapable but it’s no Spaghetti Western.

This narrative is applicable to a host of footballers. The ego players, the dressing room ruin-ers, the not quite good enough. However, a certain crop can lay claim to the title of the successful journeyman. Entering a club as an intrepid outsider, they can leave a hero having scored a barrage of goals. This is applicable to Luca Toni, who debatably found himself promoted to Sheriff as his career wound down at Hellas Verona – the 15th and final club on his illustrious cv.

‘What’s all the fuss about? We’ve heard of Luca Toni…’

Yes, of course. You know Luca Toni, the magnificent six foot four Italian target man. Before our focal point of Verona, Toni had cut his teeth in the lower divisions of his native land, alongside some promising glimpses with smaller first division sides. From his hometown Modena to Vincenza, his goals were appreciated – yet his appearances were fleeting. Between 1994 and 2001, every club the big forward had played for would only get to marvel at him for a single season. It was a case of score and go with a prolificity that almost held mythical prowess at times. Where would a report of a Toni sighting appear next?

’01 would see Toni join Carlo Mazzone’s Brescia. There, playing alongside the great Roberto Baggio and one Pep Guardiola, he’d stay for two seasons. In that period, he’d notch 15 times in 44 league appearances. When he felt his time was up with I Biancazzurri, Toni joined an ambitious Palermo side. The Sicilian fans were longing for promotion after languishing in Serie B for nearly 30 years. Well, clearly Luca enjoyed the island life and bagged an impressive record of 30 goals. His attacking output put Palermo in the pink as they marched on to first division football. He stayed on for one more term and scored 20. Palermo not only comfortably survived but historically qualified for the UEFA Cup. Aside from the goals, another personal feat was the forward receiving his first Italy cap.

With goals at seemingly any level, Palermo would’ve done well to keep Toni’s upward trajectory to themselves. Fiorentina’s €10 million were enough to sway the bigwigs. Toni moved on – banished and branded a traitor.

Hitting his prime – Part I

Luca Toni’s career up to this point had been rock solid. There were goals of all kinds from this man who was gifted in the air and with both feet. When even catching a glimmer of the striker, whether that be live or in a dodgy YouTube compilation with obnoxious music, he seemed to both conform to and defy his position. On the one hand, there was his tall lanky frame and long limbs that enabled him to score with an almost industrial power. Yet on the other, he possessed a certain finesse.

He could trap a ball from over the shoulder. He could find the corners with ease. Behind his slick and often smiling façade, was a subtle deadly skill. It was almost like having an assassin hidden in a mascot costume. As the silver screen’s famed Gladiator once said: “death smiles at us all, all a man can do is smile back”. That would often be the case for defenders. In certain situations, goals were a given. That twisting hand to the ear celebration would be the last image flashed across many markers fading brains.

Now at Fiorentina, Toni would find 2005-06 to be a dazzling time in his career. In that season for I Viola, he appeared in every league game and racked up the season’s best tally of 31 goals. Alongside his first Capocannoniere award, he’d also get his hands on the European Golden Boot – besting any other player in the continent’s top divisions. To top it all off, Toni’s Italy won the 2006 World Cup.

From on fire, to out in the cold

In 2007, Germany was the striker’s new home as Bayern came a-knocking. His move to Munich came after an expressed desire for pastures new – but he had to promise Club President Andrea Della Valle that he wouldn’t join a rival. Avoiding another fuming Palermo scenario, Toni was revealed along with Franck Ribéry and the new number nine hit the ground running. In his eventual 60 league appearances, he scored a brilliant 38 goals. There were also trophies to boot – with the 2007-08 Bundesliga title and that season’s DFB Pokal and DFB LigaPokal.

What had been such a good era, unfortunately, ended on a sour note. As well as scoring, Toni had been in the wars. Most notably, an Achilles injury for most of the back end of the 2008-09 season plagued his involvement. After his recovery, things didn’t quite feel the same at the Allianz Arena.

On the 7th of November 2009, manager Louis van Gaal had seen enough. The board came up. Toni skulked off and actually left the stadium, for which he was fined. The relationship with his stubborn Dutch manager would worsen further and President Uli Hoeness stated that the striker would be allowed to leave for free. Under a mutual agreement, the hand twisting finisher instead left for Roma on loan. Although he’d score five in 15 for the Romans, it was a real fall from grace – and marked the start of a real spiral for the 33-year-old. He had once been a Bundesliga and UEFA Cup top scorer. Now, he was an afterthought.

Obscurity as a bit part player

Given Toni’s age, he could’ve just quit. However, for a man who just adored scoring goals, retirement wasn’t an option. It was almost as though the frontman was chasing the dragon but his efforts weren’t fulfilling his addiction. After Roma, his strike rate decreased further.

Genoa fans in the 2010-11 season would see him score three. The season after with Juventus, he’d get two. A weird visit to the UAE and Al Nassr reaped three goals. It was almost as though the clinical striker was gone and what remained was a tired hack. A return to Italy beckoned. He was better than the sideshow he had become.

Fiorentina gave the now 35-year-old a chance. Often on the fringes and emerging as a sub, Toni repaid his believers with eight league goals in 27 league appearances. Still, it was a shadow of what he was before. Then all of a sudden, something clicked. It was just at the right time too, as a newly promoted side offered up a new challenge in 2013.

Returning to his prime – Part II, the long awaited sequel (and finale)

When 36-year-old Luca Toni joined Hellas Verona for the 2013-14 season, it didn’t exactly send the media into a meltdown. On the face of it, he was a respected name but on an initial one-year contract, not too much was expected. The club seemingly already had its goal scorer with Daniele Cacia, so Toni’s input was more for morale value than a practical one. He brought experience. Football is still an ever-changing beast, but it’s good to have a wise old head in your corner. The expected role was ‘protagonista’. Coach Andrea Mandorlini saw Toni as a leader, able to teach the younger players and raise the professional standard.

Mandorlini was right. Well, he was more than right. On the target man’s first showing for the club, a 1-0 victory against old flame Palermo in the Coppa Italia, it was Toni’s goal that proved to be decisive. In his Serie A debut a week later, Toni grabbed an impressive brace as Verona beat Milan 2-1. For many critics, it was a bolt from the blue (and yellow). As Toni scored and assisted in consecutive games, there were even calls for him to return to the national side. Ever the humble professional, the striker stated:

“I am thinking about doing well. Then it is for Cesare Prandelli to decide. For me, it would be a pleasure and an honour to go to the World Cup, but whatever happens there would be no issue.”

Ultimately, Toni would not return to the international stage. However, you doubt he really cared. At the end of the 2013-14 season, he had 20 goals. With this astounding, throwback tally he was the second-top goal scorer in the league at the age of 37(!) This was his biggest return in a tiresome six years and dragged Verona to an unlikely 10th place.

But wait, do not scratch your eyes. He’d surpass that the next season. Not only did that term see him convert his 300th career goal – he finished with 22 goals. Level with one exuberant Mauro Icardi, Toni finished top of the scoring charts and sealed his title as the oldest Capocannoniere in Serie A history, a long nine years it had been since his last one.

After this late flurry of goals, Toni’s third and final season at the Stadio Marcantonio Bentegodi would be more on par with a 39-year-old’s output. Injuries and clashes with new manager Luigi Delneri were a potent mix that disrupted any form. After Verona were eventually relegated in the 2015-16 season, Luca Toni confirmed his retirement on the 4th of May 2016. Although his career had come to an end, the forward went out on his own terms. His last ever goal in professional football was a sublime Panenka penalty in a home win against none other than that year’s champions, Juventus. That says it all.

In that game, a visibly emotional Toni made way on 85 minutes. He left to a standing ovation and stats that read like this:

16 goals in 47 appearances for Italy

Toni ended his career no doubt proving that he could do it at the highest level right until the very end. His final flurry cemented his name as one for the hall of fame of great Italian strikers. Forget the dark, dry spells. Currently, he sits as the fourth-highest scoring Italian player of all time.

He entered a sharp shooting outsider with a reputation. Ultimately, he left as one of the kings of the corral. Luca Toni…