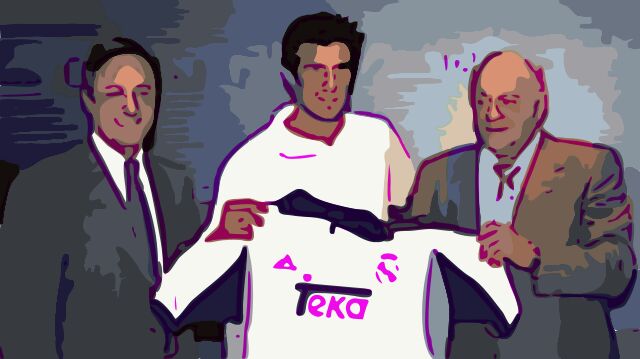 “Why was this such a big deal?” Says my Mum, en-route to her chair as my Dad and I watch Figo’s return to Barcelona on TV. The game from near 22 years ago at Camp Nou is hostile. There’s all sorts of banners and projectiles but still she makes her usual ‘just a game’ spiel. At surface level, she’s kind of got a point. But Figo to Real Madrid, though. From Barça?! What’s up with that? In reality, we all know the deal. As does the man himself as he claims to reveal all in this new doc ‘The Figo Affair’ on Netflix.

Becoming one of Barcelona’s adopted sons

Luís Figo had joined Barcelona in 1995 a highly praised prospect from one of Portugal’s finest clubs, Sporting. His creativity and ability on the wing had left defenders all around the Primeira Liga delighted at his leaving. Barça looked to be the perfect fit for the Almada native, as he joined Johan Cruyff’s side to perform blissful football in the glistening Kappa kit.

Figo hit the ground running in blue and red. He’d left Sporting with a Taça de Portugal and he’d continue his career winning trophies in Spain. Starring alongside Ronaldo, he won the 1996-97 UEFA Cup Winners’ Cup. Amidst a dangerous forward line that involved Rivaldo and Patrick Kluivert, Figo and the team achieved super successive La Liga titles.
Embed from Getty Images
Figo’s presence and style had helped to raise the bar at Barcelona. Players like him had aided not only the club, but also the region of Catalonia – giving it a sense of external approval. The Portuguese winger bought into what the Catalan club was all about, a club that represented its region against the still present centralism found in the capital and historically Franco’s club, Real Madrid. He seemed to understand that this was bigger than football and the fans embraced him for that. A poignant part of the documentary illustrates this perfectly in an archived 90s interview:
Interviewer: You know that the Catalan people express their feelings through this club to Spain and the rest of the world. That’s how we express Catalan nationalism. What do you think about this?
Figo: From my point of view, it’s a way to reclaim a way of life, a way of thinking, for the people of Catalonia. Since I’ve arrived at this club, I’ve always felt supported. I think I owe the people a debt of gratitude.
Pair words like these with his actions on the balcony as Barcelona celebrated their league triumph in 1998, you would’ve thought he was never going to leave. His jet black hair was painted blue, red and yellow. The adoring fans lined the city square and he looked out. “We’re a family! Long live Barça! Long live Catalonia!”

Now, everything looked rosy between Figo and Barcelona. Yet, as the new millennium approached – things behind the scenes started to change. Here, it’s key to introduce three integral figures in the winger’s exit from Camp Nou to the Bernabéu.

José Veiga was Figo’s agent. He’d known the player since he was a teenager and was a trusted part of developing his career. Paulo Futre was a veritable icon in Portugal. A young Figo had looked up to his fellow winger who had a remarkable time playing for the likes of Sporting, Porto, Atlético Madrid and Benfica. Now retired, Futre had become close with the Barça man.

The third figure possesses a villain-like stature, especially his regards to the modern Super League. Florentino Pérez, a man who had made his name in engineering, was a Real Madrid member for 40 years at this point. As Real President Lorenzo Sanz announced his final year at the helm, Pérez was determined to take over the club he adored. The new man in the race knew what he wanted from Los Blancos and he found Figo an important cog in getting elected. At a press conference in his campaign, Pérez revealed:

“If I become president of Real Madrid, Luís Figo will be a Real Madrid player. And to underline how confident I am, if I am elected president and this doesn’t happen, I will pay the membership fees for every member next season.”

With the Portuguese winger’s release clause set at around 60 million Euros, Paulo Futre acted as a catalyst between Pérez and Veiga. At the industrialist’s office, Futre called Veiga late at night talking of a new candidate to take over Real. He said he wanted to sign Figo. Veiga, surprised, hung up on his friend straight away. With Pérez in range, Futre continued talking. He was acting as if he was negotiating when in reality there was no one there.

“Those 30 to 40 seconds, when I was pretending to talk to José, are key to the whole operation”, he said. “If Florentino Pérez can pay 72 million Euros in cash, he can afford more.”

Effectively, Futre lied to the soon-to-be president that Veiga wanted a higher commission. Pérez agreed to a five million Euro commission, the two shook on it and when Veiga was informed he was stunned. This alluring prospect got the wheels turning.

For Luís, transfers had gone sour before, as had this stirring (at face value) loyalty. Although he had declared his love for Barça, there was a track record. There was room for misadventure to transpire. For instance, as the documentary underlines, his move from Sporting to Serie A. Before getting the green light for his Barcelona move, Figo had agreed terms with both Parma and Juventus. Subsequently, his perhaps poor communication or commitment duelly got him a two-year Italian transfer ban. Keep that in mind when you consider the Real Madrid move.

Italian football, at the time, was the best in the world and Figo’s nature of doing whatever to better his career is clear. His thoughts regarding the Blaugrana are similar too. He felt underappreciated in a sphere where he was considered one of the best.

“For me, it was a lack of consideration given what I meant to the club, what I gave to the club, and what I’d done for the club. I wanted to play football in a place where I’d be appreciated. That’s what convinced me to join Real Madrid.” Figo, 2022

Amidst the saga, Figo holidayed with his family. Seeking refuge in Sardinia, he could hardly avoid the transfer. It was a media storm across Europe and the world.

With the help of agent Veiga and Florentino being voted in, Figo joined Real Madrid for a world record fee in July of 2000. What was worse, was that Figo had agreed a pre-contract agreement. Throwing in further contention, he denied this. Although it was a meteoric move, Figo continued a star and in the December, he won the Ballon D’or.

Before that though, he returned to Camp Nou to face his old team and the noise was simply deafening. Now, Luís had seen both sides of the coin. Hero and stardom, to treacherous enemy. There were banners that read “Figo traitor, welcome to hell.” Once, he had been a son of this city, now he was a “Portuguese Bastard”, a fresh target for Barcelona fans’ finest projectiles.

One of the most powerful metaphors that illustrated Barcelona fans’ loyalty to the club was archive footage of them removing the ‘Figo 7’ from their strips. No burning shirts here, the badge was sacred.

In his return, Figo’s Real lost 2-1. Yet, in a wider scope, his transfer sent massive shockwaves. Effectively, his move had changed the dynamic of Spanish football. It marked the beginning of the Galáctico era and a chokehold of success. In Figo’s absence, Barça won nothing for five years. Real Madrid on the other hand won two leagues, two Copa de Espanas, a Champions League and a Super Cup, and one Intercontinental Cup. Ending this article on the prospect that José Veiga eventually made 3 million euros off this move alone, and Paulo Futre made 1.5 says enough. The spark of the 2000s illustrates a cosmic shift in football and offers a platform for the worst of the modern footballer. Money. It smacks of current dodgy agents and hanger-onners all in it for a quick buck. It’s a shame where the ‘beautiful game’ is heading. Can it get any worse? You dread to think…