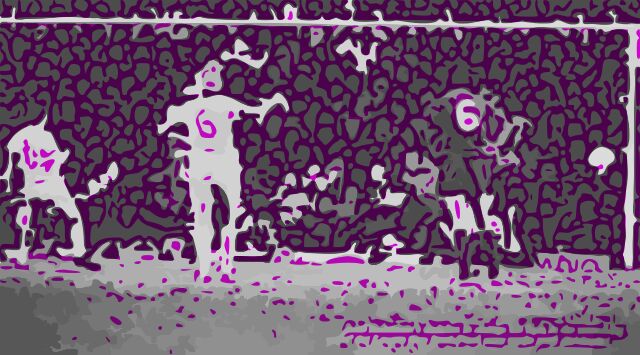 Those with a working pulse, football-wise, are no doubt aware of end-of-season winner-take-all defining matches. Matches whereupon everything is riding on them and the winners sail off into the sunset while the losers are doomed to at least another year of purgatory.

Aside from the obvious season-defining cup finals, matches that invariably fall into this category are play-off finals whereby the whole 46-game league season hinges on a 90-minute showdown.

Occasionally, though, the regular league season will also throw up some such winning-is-everything matches where two teams meet on the final day with everything at stake. The most obvious example of relatively recent times would probably be May 1989 and all that and the little shindig played out at Anfield between Liverpool and Arsenal which I think we’ll just gloss over for now, if that’s ok with everyone.

Another example would be the 2007 relegation scrap between Sheffield United and Wigan Athletic when the two sides met on the last day of the season locked in a desperate battle to avoid the drop. Sheffield United needed a point to stay ahead of Wigan and thus avoid the drop, while Wigan needed to win to have any chance of staying in the division. Amusingly for those who revel in the misfortunes of the legend that is then-Sheffield manager Neil Warnock, the away side prevailed by a 2-1 scoreline and sent the Blades down.

Another final day clash that – understandably perhaps – gets overlooked was way back in 1947 when Wolves met Liverpool and Molyneux with the home side top of the table by a point over the visitors. Liverpool’s 2-1 victory was enough to see them leapfrog the home side with both teams now having completed their matches. There was, however, an outside chance that both teams could have subsequently been overtaken had Stoke City won their final game.

Well, anyway, as well as last-day clashes that did happen – as described above – there are a number of matches that either nearly happened but didn’t quite, or else did go ahead but with not quite the importance attached to them that once looked likely. These examples can refer to both league and cup competitions.

The final match of the 1977-78 season saw the top two sides in the division, Nottingham Forest and Liverpool, clash at Anfield in the fourth coming together of the sides in Forest’s first season back in the top flight for five years.

The earlier league game at the City Ground had ended in a 1-1 draw, but it was in the League Cup Final a couple of months before the end of the season that Forest embarked on what was to become something of a hoodoo on Bob Paisley’s all-conquering Liverpool side.

Despite dominating for 120 minutes at Wembley and then for a further 90 in the replay at Old Trafford, Liverpool somehow contrived to lose by the only goal of the tie – a debatable penalty tucked away by John Robertson.

Now, at the end of the season, the top two met again in a rearranged match. The game should have taken place in March but was postponed and so by the time it came around it. unfortunately, was a bit of an anti-climax as Forest went into the match a clear seven points ahead of Liverpool who had the consolation of a European Cup Final date to look forward to in eight days’ time. To nobody’s particular surprise, the match petered out into a goalless draw. Had the match been played when it was originally planned, there may have been more at stake.

A similar scenario took place in 1985 when the final fixture of the season saw the top two clash. Originally due to meet at Goodison on FA Cup quarter-final day, the game was pushed back to the end of the season when it was supposed that it might well be a title decider. By the time the game came around, however, Everton and Liverpool had secured the first of three successive Merseyside one-two finishes with Everton a cool ten points ahead of their Anfield rivals. With nothing more than local bragging rights at stake, the Toffees ran out single-goal victors.

Exactly one year later and the potential for perhaps the mother of all final day clashes existed right up to the last Saturday of the season. The league table looked like this.

With Liverpool away to Chelsea, a victory would secure the title while a draw would potentially open the way for West Ham to sneak in and take the honours as long as they simultaneously won away at already relegated West Bromwich Albion (which they did, 2-1). Everton still had a chance too as long as they defeated Southampton at home (a 6-1 victory) and Liverpool lost to Chelsea.

After the Saturday matches were completed, Liverpool’s league programme would be finished while Everton and West Ham would meet in the one game they each had left. Therefore had Liverpool lost (say, 1-0) at Chelsea the scene would have been set for possibly the greatest title shootout of all time at Goodison Park. The table would have looked like this.

This scenario would have meant that in the event of a positive result at Goodison, the victors would take the title while the losers would finish third. Had the game ended in a draw, though, then the title would have been won by Liverpool.

Unfortunately for the Hammers and Toffees, Liverpool did the business at Stamford Bridge thanks to a solitary Kenny Dalglish strike and so the Everton-West Ham game became in effect a play-off for the runners-up spot with Everton prevailing by a 3-1 scoreline.

In the FA Cup and Europe, there have been some similar ‘near misses’ when it comes to matches that didn’t happen. These include the 1973 and 1999 FA Cup Finals.

In 1972, Leeds United met and defeated Arsenal 1-0 in the FA Cup Final and when the same two teams made it through to the last four of the following season’s competition and were kept apart in the semi-final draw with Leeds meeting Wolves and Arsenal being paired with Sunderland, it looked odds-on that for the first time in the twentieth century a direct repeat of the FA Cup Final was on the card.

Unfortunately for Arsenal, Sunderland had different ideas and a 2-1 victory at Hillsborough saw them through to the Twin Towers.

Twenty-five years later, Newcastle United were beaten 2-0 at Wembley in the FA Cup Final by Arsenal, and, again, twelve months later both sides were in the last four once again. While Newcastle were getting past Tottenham Hotspur at the first time of asking, Arsenal and Manchester United were playing out a goalless draw at Villa Park. In the replay, also at Villa Park, the scores were locked at one apiece when Phil Neville gave away a penalty with just minutes of normal time remaining.

A place at Wembley beckoned for Arsenal and along with it a repeat of the previous season’s final. Dennis Bergkamp’s penalty was not the greatest he ever struck, and Peter Schmeichel was able to push it away. Ryan Giggs grabbed a winner in extra time and the rest is history.

European competition too has seen its fair share of ‘almost matches’. In 2007 and 2008 Liverpool and Manchester United came close to meeting in the Champions League Final with Liverpool defeating Chelsea in the ‘07 semi-final, while United were unable to hang onto a first-leg advantage over AC Milan. While the following season saw the roles reversed with Manchester United saw United scramble past Barcelona 1-0 on aggregate while Liverpool fell 4-3 overall to Chelsea.

The following season saw Chelsea come within two minutes of winning their way through to the final for a second successive final match-up with Manchester United. As United were making short work of Arsenal by a 4-1 aggregate in the last four, Chelsea were locked in a titanic battle with Barcelona. A more than credible 0-0 draw at the Camp Nou gave Chelse everything to play for back at Stamford Bridge where a solitary Michael Essien goal after 9 minutes looked to have done enough to tee up a repeat of the 2008 final.

Unfortunately, a refereeing performance that would make Clive Thomas blush put paid to Chelsea adding to their total as four pretty blatant penalty appeals were turned away and then Chelsea fell to a sucker punch equaliser and thus elimination on the away goals rule courtesy of an Andres Iniesta strike deep into injury time.

Finally, of course, last season saw Manchester City somehow snatch defeat from the jaws of victory in their semi-final match up with Real Madrid by conceding two late, late goals and so miss out on a mouth-watering final match up with Liverpool.