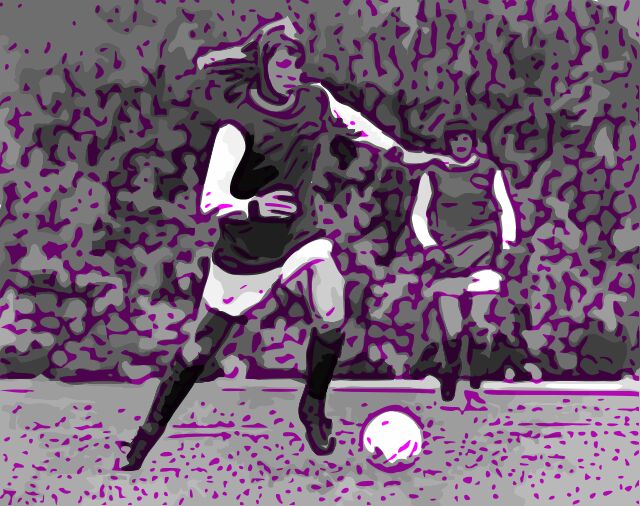 A complaint often heard on the terraces (they do still exist, don’t they?) or more accurately, amongst the footballing fraternity at large, is that there are no ‘entertainers’ anymore. Unlike the so-called halcyon days of the Seventies when the game was supposedly awash with ‘characters’, football nowadays appears to have become too serious a sport or entity for players to – heaven forbid – seem to be enjoying themselves.

This seemingly sad state of affairs forces the Oldies (like myself) to constantly hark back to ‘the days when football was fun and players were real men’. The more discerning reader might just note the slightest hint of sarcasm in my spiel thus far, but there is an element of truth in these cynic-dripping words. The days when the man on the street could relate in any way, shape or form to the elite footballers of the day are long gone and will not be returning.

Anyway, one player who perhaps does not get as much credit or focus as he deserves for what was quite an extraordinary career is Charlie George, of Arsenal and Derby County (in particular) fame.

Charlie George: Straight off the terraces

Born in Islington, North London, George perhaps not surprisingly grew up as an Arsenal fan and in 1966 was the last signing made in the Billy Wright managerial era. After signing professional forms in 1968, he made his debut a year later on the opening day of the 1969-70 season and quickly became a regular in the side. The season itself was a successful one for both George and the Gunners as a club, as the Inter-Cities Fairs Cup – the forerunner of the UEFA Cup – was secured after a 4-3 aggregate final win over RSC Anderlecht.

It was the 1970-71 season that would see George write his name into Highbury folklore as Bertie Mee’s Arsenal went neck-and-neck with Don Revie’s Leeds United for the First Division title while battling through to a Wembley FA Cup Final showdown with Liverpool, led by the legendary Bill Shankly.

With three of the all-time managerial greats locking horns for the two major domestic honours, it was left to the players on the park to do the business and determine the destiny of the trinkets.

While George was playing his part in the title push with five goals from 17 appearances, it was in the FA Cup that his contributions really shone. Scoring in the fifth and sixth rounds, he repeated the trick in the semi-final victory over Stoke City. By the time the cup final came around the title had been secured courtesy of a single-goal Arsenal victory over North London rivals Tottenham and so Arsenal met Liverpool with the Double at stake.

A dour game headed goalless into extra-time before Steve Heighway put Liverpool ahead only for Eddie Kelly to shortly afterwards equalise. Into the second half of extra-time and a replay was looking on the cards for the second successive season when George stepped forward into a career, and possibly, life-defining moment.

Receiving the ball just outside the Liverpool penalty area, George turned and slammed an unstoppable right-footed strike past the despairing Ray Clemence and secured the Cup and Double for Arsenal. The subsequent celebration of collapsing star-like on the lush Wembley turf promptly became as iconic as the goal itself. Years later George would state that the intention behind the iconic celebration was simply to eat up a bit of time.

Firmly installed as the Darling of The North Bank, George once again bagged a semi-final goal against Stoke in the following season’s FA Cup but could not help Arsenal defend their trophy as they were beaten 1-0 at Wembley by Leeds United. Another tilt at the Double in 1973 ended in narrow failure as Arsenal finished as runners-up in the league and were defeated at the FA Cup semi-final stage.

The end of the Arsenal dream: Clough comes calling

The Arsenal side then began to break up and George found himself no longer undroppable as he began to fall out with manager, Bertie Mee, with whom he stated in his autobiography and in subsequent interviews that he never saw eye-to-eye nor particularly respected as a manager. He was gaining a bit of a reputation on and off the pitch as a maverick and on more than one occasion found himself in disciplinary trouble with the club. By the end of 1974, George was dropped from the team and on the transfer list.

In July 1975, with several sides interested in securing his services, including North London rival, Tottenham, George made what was on paper a good transfer for him personally when he joined league champions Derby County in a £100,000 deal and so broke the hearts of Arsenal fans everywhere.

Making his Derby debut at Wembley in the FA Charity Shield against FA Cup winner, West Ham United, George instantly settled at the Baseball Ground. An early highlight came in the second round of the European Cup when Derby met the legendary Real Madrid. On a never to be forgotten night before a capacity attendance, Derby took Real apart and emerged 4-1 victors with George scoring a famous hat-trick. Unfortunately for the Rams, the second leg was somehow lost by a 5-1 margin and Derby exited the tournament.

Despite Derby challenging at the top end of the First Division and going far in the domestic cups, no further major trophies were won and the title-winning side soon began to break up. In 1978, after a short spell playing in America in the NASL, George signed for Southampton where he would spend the next three years and in that time, line up alongside luminaries such as Kevin Keegan, and Mick Channon and Alan Ball.

By now George’s international career, such as it was, had been and gone. Having played five times for the England U-23 team, there was glamour in the press for England boss, Don Revie, to include George in the full international set-up. Revie was far from convinced but bowing to ongoing pressure he finally selected George for a place in the starting lineup for a Wembley friendly against the Republic of Ireland.

George was played out of position on the left wing and was substituted after an hour. As he discontentedly trudged his way to the bench, Revie muttered a platitude or two in his general direction and was said to have been met with a three-word response suggesting the manager commit an anatomically impossible physical act upon himself.

Charlie George stayed at Southampton until 1981 but during his spell at the Dell, he was involved in a weird loan deal with Brian Clough’s European Champions, Nottingham Forest. In rather a quirky deal, he moved to the City Ground in early 1980 on what was supposed to initially be a one-month deal with a view to extending it or even making the move permanent.

As it happened, George would only play a handful of games for Cloughie before returning to Southampton without all parties being able to come to an agreement. However, two of the games which George turned out in were the two-legged European Super Cup Final against Barcelona. George scored the only goal of the first leg of the City Ground first leg, and with the return in the Camp Nou ending one apiece, George bagged himself a winner’s medal to go alongside the earlier Highbury successes.

After leaving Southampton, George wound down his career. Amongst other clubs, he spent a short spell back at Derby before retiring from the game in 1983.

The legacy of Charlie George

Recognised within the game as either a forward or an attacking midfielder, George was popular at every club he played for. He was also well-known for his hairstyles long before David Beckham or Paul Pogba were even twinkles in their respective father’s eyes. At Highbury he wore his hair long and lanky, making him look like a beatnik from Woodstock, while at Derby he experimented with a perm that gave him more than a passing resemblance to Rod Hull of ‘Rod and Emu’ fame.

After football, like so many before and after him, George tried his hand at running a pub with mixed success and, unfortunately, fell on hard times at one point.

He is still fondly remembered and in demand for interviews and the like in which his love for Arsenal is still glaringly apparent. In a nice touch, Arsenal came to his aid to a degree and he is now employed at the club in the hospitality department.