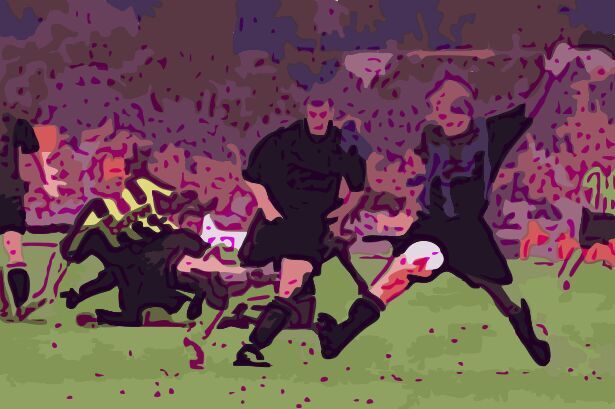 In the last 10 years, Manchester City has been the dominant force in the Premier League, winning 7 league titles, 6 league cups, 1 FA Cup, as well as a Champions League final appearance. The Citizens have also spent hundreds of millions of pounds on new and quality players such as Kevin De Bruyne, Jack Grealish, Ruben Dias, and Ederson, plus the arrival of Norwegian striker Erling Haaland this summer.

To say their current squad of players is littered with quality would be an understatement as Pep Guardiola continues to sweep aside the competition, with only Jürgen Klopp and his Liverpool side posing any real threat to City’s dynasty at the top of the table.

However, there was a time before money and glamour in which the blue half of Manchester played in the third tier of English Football. So in my latest piece, I want to focus on Man City’s playoff final win against Gillingham in 1999 and look at how that game wrote itself in the club’s history books.

The Road to Wembley

At the end of the 1998/99 Football League season, City finished third in the Third Division table, missing out on automatic promotion to Walsall by five points, while Gillingham finished in fourth place with a total of 80 points. The rest of the playoff pack finished with Preston North End in 5th place and Wigan Athletic occupying the last spot in 6th.

Fulham won the league with a decisive 101 points total, so to decide the final promotion spot available, Man City would face Wigan and Gillingham would play Preston in the playoff semi-finals.

The Gills played Preston on the 16th of May at Deepdale. It was goalless at halftime as neither side could be separated. But nine minutes into the restart, David Eyres put Preston 1-0 up, and for a while, it looked like the home side would hold onto the lead going into the second leg.

But with 11 minutes to go, Gillingham got their equaliser through Robert Taylor and the match ended all square. An even tie as both teams as they headed towards Prestfields stadium for the second encounter in three days.

Right at the beginning of the second leg, Gillingham made the perfect start when Andy Hessenthaler gave them the lead with just two minutes on the clock. Barry Ashby passed to Carl Asaba, who guided the ball to Hessenthaler to score.

Despite pressure from Preston to find an equaliser, Gillingham held onto the lead. The away side had an amazing chance to score, but were thwarted when goalkeeper Vince Bartram dived full-length across his goal to keep out a strike from Jon Macken. The match ended 1–0 and The Gills progressed to the playoff final at Wembley with a 2–1 aggregate victory.

Manchester City played the first leg against Wigan on the 15th of May at Springfield Park. The Latics made an amazing start within 20 seconds when a misunderstanding between City goalkeeper Nicky Weaver and his teammate Gerard Wiekens allowed Stuart Barlow to score from 15 yards.

Similar to Preston in the other playoff semi-final, The Latics couldn’t hold on to their lead and with 13 minutes left to play, Paul Dickov equalised, with the first leg ending 1-1, nicely setting up the second leg at Maine Road just four days later.

Man City was the dominant force in the early stages and with 27 minutes gone, they took the lead after Michael Brown’s cross was chested into the net by Shaun Goater and past Roy Carroll in the Wigan goal.

Wigan huffed and puffed throughout the match and had a good chance to score four minutes from time when Graeme Jones’ shot struck the crossbar. But it was all they could muster up as the match ended 1–0, with City progressing to the playoff final 2–1 on aggregate.

Building up to the final

The 1999 Playoff Final at Wembley was Gillingham’s first ever appearance at the national stadium, whereas City on the other hand had played there on eleven previous occasions in finals of the FA Cup and League Cup.

For Gillingham, they were aiming to reach the second division of English football for the first time in their history. But for The Citizens, having spent more than 100 seasons in the top two tiers and being in the Premier League as recently as the 1995–96 season, they were hoping for a way back after getting relegated twice in recent campaigns.

When the two sides faced each other in the league, the first game in November 1998 at Maine Road was a goalless draw whereas, in the reverse fixture at Springfield Park, City ran out 2-0 victors.

Gillingham manager Tony Pulis picked the same eleven players in his starting line-up as in the second leg of the semi-final. His opposite number, Joe Royle, made one change, selecting Andy Morrison in place of Tony Vaughan, who was instead named as one of the substitutes.

The Playoff Final Itself

Within the first minute of the game, Dickov’s overhead kick struck Ashby’s hand in the Gillingham penalty area but referee Halsey did not award a penalty. Shaun Goater then saw his shot hit the Gills post.

Pulis’ side got their first opportunity on goal when Mich Galloway’s shot from close range was saved by Weaver in the Citizens’ goal. But back came City who had another chance of their own when in the 26th minute, City’s Terry Cooke crossed the ball into the penalty area, where Horlock headed it towards goal, but it was saved by Bartram.

The score was 0-0 at the interval, and while both sides had opportunities to score, there wasn’t much that could separate them.

Both sides continued to create chances in the second half, Nicky Southall crossed the ball to Mark Saunders, but his shot went wide of the goal, and Asaba was tackled by City’s Ian Bishop when in a potential scoring position. Decent opportunities for The Gills, but they weren’t done there.

With 20 minutes left on the clock, Weaver saved a strongly-hit shot from Gillingham’s Paul Smith. But once again City came back and Cooke was again involved for City, as he set up Goater, whose shot went past Bartram but hit the post.

Because of the high-profile setting, both teams appeared to be overawed by the occasion and it was clear to see on the faces of players on the pitch.

The deadlock was finally broken in the 81st minute as Asaba gave Gillingham the lead, playing a one-two with Smith before shooting past Weaver from around 15 yards out. The Gills made it 2-0 just minutes later when the No9 then backheeled a return pass to Taylor who scored from the resulting shot.

Since the game was heading into injury time and with the score at 2-0 to Gillingham, almost all City fans believed that the match was over and some were beginning to head for the exit doors. But then, after Darren Carr had tackled Goater to deny him a goal-scoring opportunity, Kevin Horlock scored from the rebound for City to halve the deficit in the 90th minute.

Suddenly, the City fans had hope and nerves had begun to show within The Gills players and supporters occupying their side of Wembley. All they had to do was hold on to their lead and second-division football would be theirs.

However, in the fifth minute of injury time, two minutes longer than was initially given by the fourth official, Wiekens punted the ball forward, and Horlock and Goater helped it on to Dickov who equalised. Que wild celebrations from the City fans on their side of Wembley and a goal which Gills fans still think about to this day.

The referee blew his whistle to end the regular 90 minutes of play, and now the match would be decided in extra time and/or penalties.

Pulis’ side felt deflated and struggled to get themselves going in the extra period. Despite this, both sides still tried to get the winning goal. Dickov saw his header gathered by Bartram and although Hodge’s cross was blocked by Jeff Whitley’s hand, no penalty was awarded.

With the score level at the end of extra time, the playoff final would have to be decided on penalties.

This gave Adrian Pennock the chance to equalise for The Gills, but he missed his resulting spot-kick and squandered a brilliant chance for his team. Cooke was next and gave City a 2-0 lead in the shootout, before John Hodge scored his penalty to give Gillingham hope.

Richard Edghill stepped up to make it 3-1 to the Citizens and made sure that Gillingham had if they were to remain in the playoff final. Edghill took his penalty and was saved by Weaver, giving Manchester City victory in Wembley and earning promotion to the second division.

The City fans went into pandemonium as their club earned promotion out of their third tier and it would be the beginning of the return to the big time for the Citizens.

In the Years following promotion

Manchester City would eventually gain promotion back into the Premier League in 2002. and for a while would be nothing more than the ‘noisy neighbours’ for Manchester United. But in 2008, things would change drastically for the blue half of Manchester.

The Club would be taken over by Sheikh Mansour and following a few years of funding being put into the squad, they would win their first Premier League title in 2012 with the iconic Sergio Aguero last-minute goal.

Since then, the club has gone from strength to strength, especially with the appointment of former Barcelona and Bayern Munich manager Guardiola in 2016. Bringing in world-class players and playing a style of football that is so amazing to watch even as a neutral.

But for many City fans, the playoff final win against Gillingham in 1999. was the catalyst for their eventual success in the many years that followed and without that victory in Wembley, it’s very unlikely the club would be where they are today.