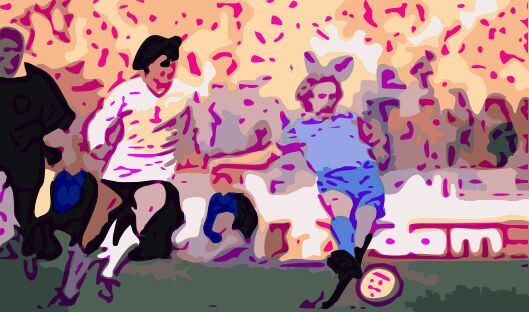 A few weeks ago we had a quick delve back into the 1970s and a look at a long-forgotten FA Cup campaign. This week it is the turn of the 1980s to get the treatment, and so we come to the 1980-81 season and the one-hundredth edition of the country’s premier cup competition.

Inaugurated in 1871 in time for the 1871-72 season, the FA Cup soon became known as the most prestigious cup competition, not just throughout England but all over Europe, and possibly the globe. By the time the preliminary rounds kicked off in the late summer of 1980, there had been 99 completed tournaments, with the two World Wars being responsible for the ten missing years. Cup finals had been held at Wembley Stadium since 1923, and in that time only one match had gone to a replay – Leeds and Chelsea in 1970, which was replayed at Old Trafford – so there had never yet been a Wembley replay.

When the First Round kicked off in late November 1980, the surviving non-league clubs were joined in the hat by the Third and Fourth Division sides and also, from the non-league ranks the previous season’s FA Trophy finalists Mossley and Dagenham; the 1980 Alliance Premier League champions, Altrincham; and for some reason, Scarborough.

The First Round went off relatively demurely with no shocks of non-league sides beating league opposition, and so on to the Second Round which kicked off on a bleak December Saturday afternoon just five days after the murder in New York of John Lennon.

This time out the non-league brigade fared somewhat better as Enfield beat Hereford, Maidstone overcame Gillingham after two replays, and perennial non-league giant-killers Altrincham got the better of Scunthorpe United and were rewarded with an away tie at Liverpool in the next round.

The Third Round and the End of an Era

The Third Round was held on the first weekend of the next year and one of the ties of the round was probably at Goodison Park, where Gordon Lee’s Everton met Terry Neill’s Arsenal side, Wembley finalists the past three seasons. For the last time ever, both Liverpool and Everton kicked off at home at the same time and while 37,170 were present at Anfield to see Liverpool run out 4-1 winners over a dogged Altrincham side, another 34,240 flocked to the other side of Stanley Park to see if Everton could halt Arsenal’s bid for a fourth successive FA Cup Final in its tracks at the first hurdle.

For 84 minutes, Arsenal played the perfect away game and with the scoreline still blank, the sides looked nailed on for a midweek Highbury replay. Then, with Arsenal actually pushing forward they were caught on the counter-attack an innocuous-looking cross was turned into his own net by the unfortunate Kenny Sansom. A very late controversial second goal where Arsenal claimed Mike Lyon’s shot hadn’t crossed the line, was the final nail in the coffin.

Elsewhere, the top two sides in the First Division, Ipswich Town and Aston Villa, met at Portman Road. On a blustery Suffolk afternoon, the home side prevailed by the only goal of the game scored by England striker, Paul Mariner, after 12 minutes.

Non-league Enfield kept up their giant-killing exploits as they deposited Port Vale out of the tournament by a 3-0 scoreline after a replay, while an intriguing tie took place at Maine Road between Manchester City and Crystal Palace. Earlier in the season, City had sacked manager Malcolm Allison after a bad run of results and replaced him with John Bond, from Norwich while Allison had promptly returned to Crystal Palace where he had taken the Eagles to the FA Cup semi-final five years earlier

Bond and Allison had been playing colleagues at West Ham some two decades earlier and in the run-up to the game, Allison, in particular, made some derogatory comments about Bond and his managerial capabilities. At the final whistle, it was Bond who was celebrating as City ran out comfortable 4-0 victors.

The Fourth Round and Mersey Misery

Into the Fourth Round and the stand-out ties included a Merseyside derby at Goodison, Nottingham Forest and Manchester United clashing at the City Ground, John Bond coming up against his old club Norwich City at Maine Road, and the last non-league survivors, Enfield, doing battle with Barnsley.

A bad-tempered affair at Goodison Park ended in a slightly surprising 2-1 victory for the home side, while Manchester United succumbed to the only goal of the game away to Forest. John Bond’s reunion with Norwich was as sweet and straightforward as the 6-0 scoreline would suggest. Enfield put up a good showing away to Barnsley and managed a more than creditable 1-1 draw, thus gaining a place in the draw for the fifth round and a possible trip to First Division Middlesborough.

The replay was switched from Enfield’s 7,500 capacity stadium to nearby White Hart Lane, and despite Tottenham’s capacity being reduced due to the ongoing development of a new main stand, a bumper sell-out crowd of 35,244 turned out to watch the clash. Unfortunately for Enfield, the dream came to an unceremonious ending as the Third Division side triumphed by a 3-0 scoreline.

The Fifth Round and the Last Eight

The Fifth Round saw Everton once again drawn against one of the favourites as they lined up against Kevin Keegan’s Southampton. A solid 0-0 draw at the Dell set the Toffees up for a single-goal replay victory at Goodison three days later and a place in the last eight for the second successive season. League leaders Ipswich continued their quest for a domestic double with a solid if unspectacular 2-0 home victory over Charlton Athletic, while Manchester City triumphed by the only goal of the game away to Peterborough United.

The final eight threw up some interesting ties in as much as European Champions Nottingham Forest were matched at home with favourites, Ipswich; Middlesbrough and Wolves met at Ayresome Park; Everton met Manchester City at Goodison, and Tottenham were at home to Exeter City.*

While Spurs huffed and puffed their way to an unconvincing 2-0 success over mid-table Third Division Exeter City at the first time of asking, the other three ties all went to replays. Wolves overcame Middlesborough at Molyneux 3-1 after a 1-1 draw, while Everton finally bowed out by the same scoreline at Maine Road following a 2-2 thriller at Goodison.

The tie of the round took place at the City Ground, where Nottingham Forest took on Ipswich. The Suffolk side raced into a two-goal lead within twenty minutes only to find themselves pegged back and going into half-time level at 2-2. A John Robertson penalty then put Forest ahead and within touching distance of the semi-finals, only for Frans Thijssen to squeeze in a late equaliser and bring the sides back to East Anglia. This time out there was nowhere near as much drama and Ipswich prevailed by a single goal.

The Semi-Finals and ‘Our Clive’ Plays a Blinder

By the time the semi-finals came around, Ipswich were firmly installed as favourites and were expected to overcome Manchester City at Villa Park, while Tottenham and Wolves combined to take on the might of Clive Thomas at Hillsborough.

Ipswich were still chasing three trophies, being top of the league and into the semi-final of the UEFA Cup as well as in the last four of the FA Cup, going into the tie. However, injuries and a relatively small squad were starting to catch up with Bobby Robson’s side and Manchester City put up dogged resistance on a rain-sodden pitch and were able to take the match into extra-time. A controversial free-kick given against Terry Butcher on the edge of the Ipswich box ten minutes into the extra period proved crucial as Paul Power, the Manchester City captain, slammed the ball past Paul Cooper in goal and took City to Wembley.

Meanwhile, the other semi-final also required another 30 minutes action as the sides couldn’t be separated at the end of regulation time. In an awful harbinger of tragic events that would occur eight years later, a cramped and dangerously policed Lepping Lane packed with Tottenham supporters saw the game held up for a few minutes as supporters desperately climbed over the perimeter fences to avoid being crushed.

The match itself was a good one with Tottenham twice taking the lead in the first half. As the clock ticked past the 90-minute mark, it looked as if Glenn Hoddle’s free-kick success was going to be enough to secure a 2-1 victory and passage to the 100th FA Cup Final. Cometh the hour, cometh the man, however, and just when all looked lost for Wolves, up popped that perennial FA Cup semi-final spoiler, Clive Thomas.

Not content with ruining the 1975 and 1977 semi-finals with contentious (and ridiculous) decisions, Thomas completed his own personal hat-trick by awarding Wolves a penalty for what even the most blinkered Old Gold supporter could see was a blatant dive by Kenny Hibbitt.

Anyway, if Spurs were hard-done-by with that decision, they were undoubtedly favoured by the choice of venue for the replay. Inexplicably, the FA decreed that the second match should take place at Highbury, just a few miles down the road for Tottenham and over a hundred away for Wolves. Unsurprisingly, 75% of the attendance for the second match consisted of Tottenham fans and they saw their side overcome Wolves by a straightforward 3-0 scoreline.

The Final and Wembley finally sees a replay

Thus, it came to pass that the 100th FA Cup Final would be contested at Wembley Stadium on Saturday, May 11, 1981, between Keith Burkinshaw’s Tottenham Hotspur and Manchester City, led out by John Bond.

In preparation for the game, those perennial ‘professional cockneys’, Chas and Dave, collaborated with the Tottenham squad to produce a wonderful ditty entitled, “Ossie’s Dream.”

The game itself made history by being the first FA Cup Final to go to a Wembley replay as Manchester City’s Tommy Hutchinson had the dubious honour of scoring both goals in a 1-1 draw. The replay has gone down in folklore as one of the better Wembley finals as Spurs ran out 3-2 victors.

*Forty-one years on and your intrepid author was able to type that quarter-final line-up from memory despite not supporting any of the sides involved. How sad is that?