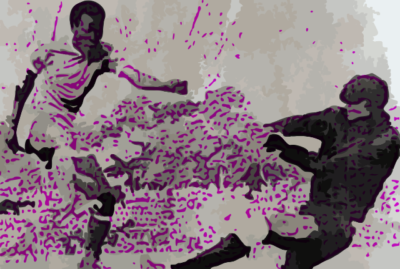 Continuing from last week’s piece introducing Godfrey Chitalu, we pick up with the deadly striker’s goal record. Although the excitement of playing behind him, this by no stretch of the imagination meant his life was free of incident. Within part two we look over a tenacious goal record, animation on the touchlines, and alas, sadly, tragedy.

Completing a career solely on home soil, Chitalu was not in the world view. Yet, he emerged into the limelight in 2012. Lionel Messi had just beaten Gerd Muller’s record of 85 goals in a year, in a quite monumental fashion. As the critics raved, the FAZ (Football Association of Zambia) claimed that the world record actually belonged to Chitalu. The forward was widely considered to have scored 116 goals during the 1972 calendar year – with 107 during the 1972 season alone.

Whether or not there’s a lack of trust regarding the Zambian league’s statistics, the people that witnessed such greatness back Godfrey’s exploits till the end. This is none the more evident than with famed national commentator Dennis Liwewe. Liwewe was the voice to the many brilliant sporting moments over the years. He was almost like Zambia’s John Motson. In an interview on national news, the commentary stalwart was obstinate in supporting Chipolopolo’s lead man.

“In 1972, Godfrey Chitalu scored a total of 107 goals. I saw those goals in one season alone, I was broadcasting those goals being scored!

I would say: Godfrey I command you in the name of the President of the Republic of Zambia to open fire!”

And open fire he did. In this season, Ucar was untouchable. Yet when FAZ presented evidence, FIFA weren’t interested. The organisation didn’t even want to ratify Lionel Messi’s goals. With no interest in tracking domestic campaigns, FIFA effectively snubbed an African icon. Nonetheless, Chitalu’s form has become the stuff of legend and more than merits the highest tally claimed by a national association.

Although briefly dabbling in coaching whilst still a player in 1975 and ’78 respectively, Chitalu took to management in retirement. He still had a lot to offer the sport he loved. Thus, he joined the staff at Kabwe Warriors as an assistant to Serb Ilija Lukić. There was something visceral hotwired into Ucar’s brain it seemed, whenever he was near a football pitch. Even in management, he couldn’t escape his old volatility.

This was evident in 1983, with a game at Railways Stadium. Warriors were trailing to Nkana Red Devils in a frustrating showing. Lukić was first to be sent to the stands for some choice words. Then, as if it couldn’t get worse – Nkana were awarded a penalty. Bemused, Godfrey entered the pitch – looking as if he was the chief negotiator for his side. Alas, the ref would be on the end of more than just words as Chitalu punched the official square in the face. The game was abandoned and Godfrey was subsequently fired. The FAZ even banned him for life.

It looked like a humiliating end for a great of the game. Yet, his club appealed the lifetime ban; citing legendary input to national football enough to merit a second chance. Godfrey got his second chance and a year later returned to the Warriors, this time as head coach.

In his stint at the helm of a club, he was so prolific at, Ucar won the Independence Cup. He also pushed the team to seventh and then an impressive third-place finish in 1986 before surprisingly being usurped.

Position in the national team

The former striker wasn’t out of work long though, as the Zambia national side offered him an administrative role. In this position, he oversaw qualification to the 1988 Seoul Olympics with a nerve-wracking aggregate win over Ghana. Although left out of the Olympic contingent, the squad made an impression – even beating Italy 4-0. Amidst a homegrown core, exported talents such as Anderlecht’s Charles Musonda and Cercle Brugge’s Kalusha Bwalya stood out.

In 1990, Kabwe required a new manager after the firing of Jack Chanda following relegation. Thus, Chitalu returned for a stint. He led the team back to the top league in rampant style, picking up the Challenge Cup and the Champion of Champions Trophy to boot.

Yet again though, Chitalu would be called back to a side in freefall as Zambia lost to Madagascar in WC Qualification. He was appointed alongside fellow great Alex Chola as assistants to Moses Simwala. Simwala would, unfortunately, fall ill before taking charge and Chitalu was promoted to head coach.

With this seemingly blossoming generation of Zambian talent, the Copper Bullets were tipped to make it all the way to the 1994 World Cup. Yet, with a national legend taking the reigns by chance and the timing of this crop of players – fate was a cruel mistress.

As said, the line-up was promising approaching 1994. Chitalu and Chola led as a dynamic duo and had a plethora of talent at their disposal.

In goal was the experienced Efford Chabala who had achieved a whopping 115 caps and even had a stint with Argentinos Juniors. Striker Timothy Mwitwa was plying his trade with Sparta Prague. Midfielder Derby Makinka was with Lech Poznan before moving to Saudi club Al Ettifaq. The focal point of the squad were those gems Musonda and Bwalya. At this point, Bwalya had moved onto PSV Eindhoven. Musonda had continued to make a name for himself in Belgium.

On the evening of the 27th of April, the team were set to travel to Dakar. Senegal were waiting, the next opponent in the World Cup Qualification adventure. In hindsight, it’s fortunate that Bwalya had made separate travel arrangements and Musonda was out of the squad with injury.

The plane left Lusaka, but sadly never reached its destination, crashing into the sea just off Gabon. Everyone on board was killed, including the two legends Chitalu and Chola. Not only had a bright future been scuppered but icons of the past had been snatched away cruelly.

The members of the team that were lost in the crash were buried and honoured in what became known as “Heroes’ Acre” in Lusaka. Kalusha Bwalya and Charles Musonda, who were fortunate not to be on the plane, were now tasked with heading up an all-new set-up.

Extraordinarily, the new faces in this resurrected team defied the odds in some challenging fixtures. Granted, they just missed out on World Cup Qualification – but they still managed to reach the 1994 AFCON Final. They took the tournament by storm before losing out to Nigeria, displaying an impressive attacking style both Chitalu and Chola would’ve been proud of.

As for Godfrey himself, his demise along with his squad was truly tragic. At a mere 45 years of age, he was taken too soon. Yet, his legacy will be hard to forget. He is widely regarded as the greatest Zambian footballer of all time. His scoring records, both domestically and internationally look like they won’t be beaten for years to come. In 2006, he was selected by CAF as one of the best 200 African footballers of the past 50 years. In 2012, an AFCON triumph in Equatorial Guinea and Gabon was befitting – as if his country had truly come full circle.

With this exciting new generation, the sky is the limit. Top talents like Daka and Mwepu may leave you wondering just how far this squad can go. However, one thing is certain – exuberant trailblazers like Chitalu will forever continue to inspire.