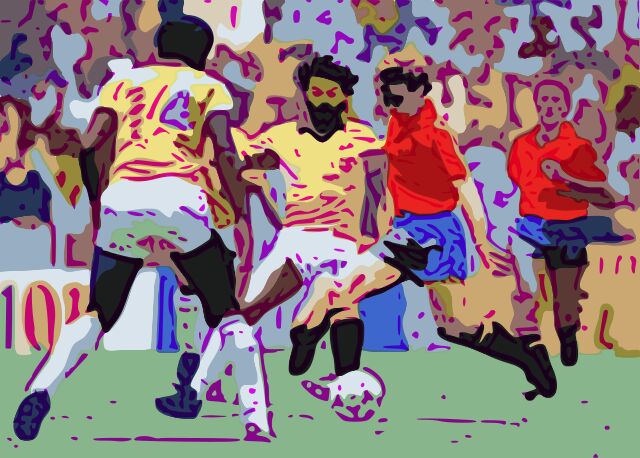 After holders Italy were held to a 1-1 draw by Bulgaria on the opening day, attention soon turned to the arrival of Brazil and France. In 1982 Brazil were regarded as the best team never to win a World Cup, and many neutrals favourites. Once they were knocked out, the neutrals turned their attention to the attractive French side, ultimately knocked out by the Germans. France then went on to win Euro ’84 and were rightly installed as one of the favourites for this tournament. For the neutrals, they also had the romance of Canada appearing in their first-ever World Cup. The big question was how many France would win by?

For the arrival of everyone’s second team, Brazil, the broadcast was beset by huge technical problems. In England, ITV were due to show the game live but instead Brian Moore and Brian Clough had to describe the game from the studio. Brazilian TV were unable to show any of the first half.

Brazil in ’82 were widely regarded as the best side never to have won the World Cup. As in ’82 they were managed by Tele Santana, but he had left after the tournament in Spain, only to return after a run of poor results. They only retained six players from that side, although they were Socrates, Zico, Falcao, Junior, Oscar and Edinho, who was now captain.

These days Spain vs Brazil would be one of the matches of the competition, but back in 1986 Spain weren’t the giants they are today. Though they were runners-up in Euro ’84 so weren’t to be taken lightly. They came through a qualifying group which included Scotland and Wales, with the Welsh being the last team to beat them, eight games before this one.

Spain thought they’d scored early in the second half. A corner from the left was headed back by Maceda to Michel, just on the edge of the area. The Real Madrid player controlled it on his chest then volleyed it onto the underside of the bar. The ball bounced down and back out again, to be eventually cleared for another corner. The Spanish players were incensed, believing the ball bounced over the line. Replays appeared to corroborate this. But unfortunately for Spain, the officials didn’t think so.

Brazil went straight on the attack after their reprieve. Michel was soon called into action to concede a corner as Casagrande made it into the box. The corner was floated right into the six-yard area and the Brazilian captain Edinho headed in. But immediately the Spanish protested that he had punched it in with his hand. The ref immediately ruled it out but did nothing to punish the player. Extraordinary. Of course, this wouldn’t be the only instance of a ball being punched into the net during this World Cup, but that one wasn’t ruled out.

Within minutes Brazil got the ball into the net, legitimately this time. Socrates combined with Junior, who played Careca in. The Brazilian striker hit a fierce shot which also bounced down off the underside of the crossbar. This time Socrates was first to react and headed it, unchallenged, into the net.

Muller came on for Casagrande and soon forced Zubizarreta into making a save low down at the near post. After Careca shot narrowly wide, Spain had another corner on the left. Again, it was headed out to Michel, just outside the area. This time he met it first time on the volley, but Carlos got down to save it.

Spain’s last chance came when Camacho arrived late at the far post to head a Victor cross. But Carlos held it after the bounce. So, Brazil won their opening match, as they had done four years earlier. This was Northern Ireland’s group so they would’ve been happy with a result from this match. The Irish had famously beaten Spain four years earlier, so had every confidence to believe they might be able to replicate that. With a qualifying place potentially up for grabs for third place too, this increased the confidence.

Canada were one of three nations taking part in a World Cup for the first time. They’d beaten Honduras, who were at the 1982 finals for their first time, in qualification. But now they were up against one of the best sides in the world. France had finished fourth in Spain but won Euro ’84 when they were hosts. Only nine players survived from the last finals, but crucially Platini, Tigana, Giresse and Fernandez were there.

Only five of the Canadian squad played their football in the domestic league, and the worldwide experience certainly served them well. They looked anything but overawed. They caused the French plenty of problems.

When they won Euro ’84, France relied heavily on goals from Michel Platini. They always seemed to lack a goalscoring centre-forward. This tournament they unveiled Jean-Pierre Papin, who at this stage had only played once for his country. Many observers were wondering what the fuss was about when he missed an open goal in the first half. He missed another golden chance in the second too. In fact, he had about five clear chances to score, all of which went wide of the mark.

As the game progressed the French gained more control. There was an odd episode when someone from the crowd threw a cockerel onto the pitch just as Canadian keeper, Paul Dolan attempted to take a goal-kick.

Fernandez hit the post with a shot from outside the area. The Canadians failed to clear the ball adequately. It came back in and Stopyra, who’d come on as sub for Rocheteau, headed it back across the goal from the far post. Papin was first to react and headed it into the empty net. France had finally broken the deadlock.

Papin’s goal was the only one in the game and Canada could hold their heads up high as they made it very difficult for their opponents. A win for the French, which was expected, but they would have to be far more clinical against tougher opponents to come.

Technical problems continued for the organisers, as the game couldn’t be shown on Canadian TV. Imagine that, it was hard enough for the football authorities to gain a foothold in the sporting public’s consciousness in the country. Now on their big day, when they’d finally arrived at the world game’s top table – technology failed them.

But the team, managed by Englishman Tony Waiters, could at least comfort themselves in repelling the inevitable onslaught from the French. Many were expecting a cricket score, but the French version was less cruel.