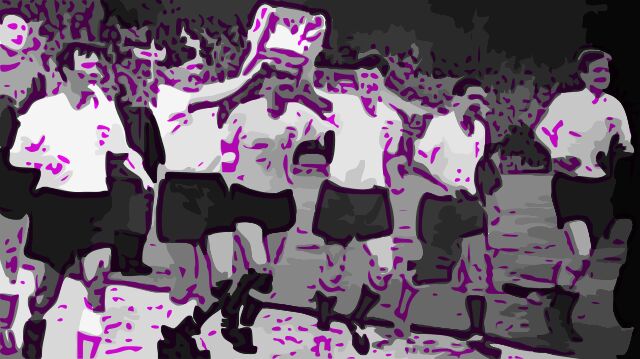 Tottenham always win a cup in a year ending in one, apparently. That’s what they used to say, or more accurately, used to be able to say.

To be fair, they did have a point – I mean, look at this;

Of 17 major honours won by Spurs, nine of them (sorry, not really counting the Charity Shield folks) were won in a year ending in the number one. That’s more than 50%. That’s a bit mental, really.

Mind you, it stopped 31 years ago as you can see. But who knows what might happen in nine years time the rate Antonio Conte is going?

Today’s Time Machine is going back 61 years to 1961 and the day that the mighty Tottenham Hotspur became the first team in the 1900s to do the famous double of the Football League Championship and the FA Cup.

Before Spurs won the double in 1961 they had a long and storied history.

As a non-league side all the way back in 1901, they famously won the FA Cup for the first time – still, and most likely forevermore, the only non-league side to have achieved this.

Incredibly, it took another seven years before they were elected into the Football League – they won the FA Cup again in 1921 but were far from regulars in Division One, spending much of their time in the Second Division.

Former Tottenham player Arthur Rowe was appointed as manager in 1949 and bringing his “push and run” football to the forefront of the English game he returned Tottenham to Division One in his first season and then won Division One at the first time of asking in his second season. Obviously, this happened in the 1950/51 season – the year ending in one.

Rowe retired in 1955 through illness and his parting gift was the signing of Danny Blanchflower – someone who will get a few more mentions as we move into the Bill Nicholson era.

Before we drill into the 1960/61 double-winning season, we should probably reflect on what Bill Nicholson achieved as Tottenham manager as, honestly, it doesn’t get talked about enough when we consider great teams and managers from years gone by.

Billy Nic took over in October 1958 and managed at White Hart Lane for the next 16 years.

His start was electric – the double in 61, another FA Cup in 62, the European Cup Winners’ Cup in 63. By the time Nicholson resigned after a poor start in 194/75, he had let Spurs to eight major trophies. The initial period was followed up with the FA Cup in 67 and two League Cups in 71 and 73.

The style of play he brought to the club, not to mention the great players signed – Jimmy Greaves (although not part of the 61 double side), Dave Mackay and John White to name just three – became the foundation of how Tottenham fans feel the club should play to this very day. Attacking football, attractive to watch became more desirable than results as the decades passed.

Tottenham win Division One in 1961

Nicholson knew he had a team capable of doing something – Spurs had finished a close third in the previous season, 1959/60.

At the start of the 60/61 season, he had said the team assembled were;

‘Well prepared to do something… you can’t put it into words, it’s a feeling you get’.

“It can be done, but you have to believe!”

During pre-season training, Blanchflower quietly told chairman Fred Bearman that Spurs would win the Double during the coming season. Personal confidence was high.

And team belief soon appeared as Spurs raced out of the blocks in the Division One season.

A record 11 straight wins from the first 11 games set out their stall as the team to beat. Man City were the first to take points off Tottenham that season with a 1-1 draw but the side bounced back to win the next four on the spin.

Sheffield Wednesday, Spurs’ closest challengers, were the first to defeat Nicholson’s side in November – but again the team responded in fine fashion winning seven and drawing one of the next eight games before a trip to Old Trafford ended in Manchester United taking all three points.

Could they bounce back again? Yes – they beat the Arsenal 4-2, never a bad thing for the confidence.

Come the end of February 1961, Tottenham were an incredible eight points clear of Wednesday – do remember, only two points for a win back then. The title was very much in their hands. In much later years, you probably would not back Spurs to see this out – Spursy, and all that – but Billy Nic’s side suffered that not. They lifted the First Division title in April with three games spare.

But, could they do the double?

Tottenham’s FA Cup campaign had started by seeing off Charlton 3-2 in front of 54,000 plus at White Hart Lane. Crewe Alexandra were given short shrift later that month, beaten 5-1.

A trip to Villa Park was the reward where two Cliff Jones goals eased them past Aston Villa and on to facing Sunderland in the quarter-final – in front of a huge 63,000 passionate Mackems at Roker Park.

The game finished 1-1, Jones again, and the two sides reconvened at the Lane four days later. Spurs triumphed 5-0 and were off to Villa Park once again for a semi-final date with Burnley.

Although Sheff Weds were the closest league challengers, many felt that on their day, Burnley were the only side that could come close to a Spurs side 100% on it.

Pre-match, Burnley captain Jimmy Adamson had pointed out to Blanchflower that his side never lost a game at Villa Park when wearing their famous claret and blue (Villa playing in the same colours meaning that Burnley wouldn’t usually be in their home kit). The mind-games failed (plus Spurs hadn’t lost at Villa Park since the Second World War).

Tottenham dominated the game and won 3-0, winger Jones and centre forward Bobby Smith getting one and two each respectively.

And as April passed, it became clear that the FA Cup Final date with Leicester City would bring the opportunity to be the first side since Aston Villa in the late 1890s to win the fabled League and Cup Double.

Tottenham headed to Wembley for their first FA Cup Final since winning it in 1921.

The opportunity in front of them was huge and Leicester were more than happy to head to the Home of Football free of the pressure of having a favourites tag hanging over them.

All focus was completely on Tottenham and whether they could lift the FA Cup and complete the Double.

Leicester were aware of the task ahead of them, however – but in goal they had the best goalkeeper in England and soon to be the world. Gordon Banks would have to be at his best to keep Tottenham’s famous attack at bay.

The game, in fairness, was far from a classic. Tottenham looked nervous and leggy, a long season clearly catching up with them.

Leicester’s game plan to frustrate Spurs was working until full-back Len Chalmers picked up an injury that meant the Foxes were down to ten in effect – these were still the days of no substitutes in football.

Spurs looked to take the initiative but Blanchflower and Mackay were struggling to influence the game.

Before halftime Welsh winger Jones had the ball in the net – but it was ruled out for offside.

It was goalless at the break – the tension clear in the Tottenham fans at Wembley.

The second half was much the same – scrappy and Leicester doing what they could to stay in the fight.

In the 66th minute, their resistance was finally broken – England international Smith got on to a pass from John Dyson, turned and shot past Banks.

Tottenham saw relief pour into their game and nine minutes later it was done and dusted – Smith returning the favour and teeing up a header for Dyson to make it two.

Tottenham Hotspur became the first club in the 20th century to win Division One and the FA Cup in the same season.

The Express went with ‘join the immortals’ as their headline the next day.

Jones was a huge influence on the side, a key player who contributed 19 goals from 35 appearances from the left wing. He said;

“They were special times. We had a great mixture of talent and skilful players, the likes of Danny Blanchflower, John White and then you had the power of Mackay and Bobby Smith and the pace of someone like myself, so it was a great blend, and we were mates, like a family. People always remember the first, don’t they? Roger Bannister and the four-minute mile, Neil Armstrong walking on the moon… we were the first to win the double and that can never be taken away from us.”

Tottenham strengthened in the summer, signing Jimmy Greaves from Chelsea. They went on to win the FA Cup again the next season before the Cup Winners’ Cup the year after.

It’s a Tottenham side that will never, ever be forgotten.