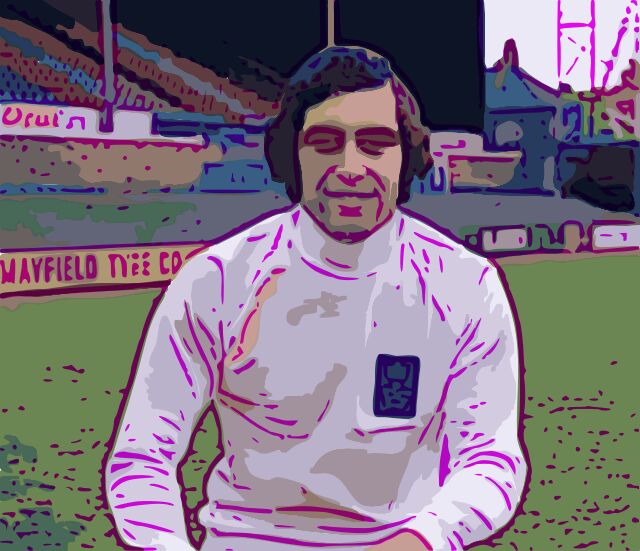 Peter Shilton made his debut for Leicester City on May 4th, 1966.

Aged just sixteen, he was already being tipped as a future England goalkeeper. Shilton went on to be the youngest goalkeeper to play in an FA Cup Final, for Leicester, in 1968.

In total, Shilton made over 1,000 career appearances for a variety of clubs and won a then-record 125 England caps. Peter Shilton is widely regarded as one of the greatest goalkeepers of all time.

Today’s time machine is going back to 1966 and Shilton’s early career and Football League debut.

There are conflicting reports of whether Peter Shilton started training with Leicester City as a schoolboy aged 11 or 13. Little did he know at this early stage that in just five (or three) years time he would be making his debut for the club.

Shilton’s first experience with the Foxes was on the Filbert Street terraces where he became obsessed with watching England number one Gordon Banks.

Within a decade, Shilton would be the reason Leicester sold Banks to Stoke City, believing that their young keeper had long-term potential.

I was sent this picture of me age 16 in 1966 playing for @LCFC day before my debut games against @SouthamptonFC 🧤 pic.twitter.com/lcGohuRMb5

Shilton made the first of 1,005 Football League appearances and the first of 339 for Leicester City on May 4th 1966.

Everton were the visitors to Filbert Street as the 16-year-old pulled on the gloves for the first time at first-team level.

14,504 were in attendance – City sat in 6th place with hopes of still finishing 2nd in the First Division. Everton came into the game in 10th.

Shilton was yet to have even signed professional forms when he made his debut – but he put in the safe kind of performance he would become known for, keeping a clean sheet in a 3-0 win for the Foxes.

Shilton would later say this about his Leicester experience;

“I am proud that whilst I was at Leicester I played for England at every level: schoolboy, youth, under-18, under-23 and then as a full international. I made my Leicester City debut (in May 1966) as a 16 year-old apprentice against Everton when Gordon (Banks) was on England duty. I’d already played in front of 23,000 at Filbert Street in the English Schools Trophy final and in front of 90,000 at Wembley for England Schoolboys. On my debut I didn’t want to make a mistake. The Filbert Street crowd was great to me. They made me feel good and I had a solid game. We won 3-0. I was really pleased with it.”

What happened to Peter Shilton next?

Leicester had clearly seen enough potential in the young Shilton as they opted to cash in on Gordon Banks just a year after Shilton’s debut.

Shilton was now 17 and admitted that other clubs were interested in signing him, meaning Leicester had a decision to make if they wanted to keep him and Banks was clearly a sellable option to help the finances.

Before his 18th birthday, Shilton even managed to get on the scoresheet for his hometown club, telling LCFC.com;

“It was in the last two minutes of a game at Southampton (in October 1967). We were 4-1 up and I didn’t know I’d scored. It was a misty dark winter’s day. I kicked the ball down the middle and I lost sight of it. I saw big Mike Stringfellow chasing it and I thought that it was him who had scored. I thought I’d just done a big kick. In the dressing room the lads were saying I’d scored. I thought they were taking the mickey. We had to catch a train back to Leicester at about five o’clock and it wasn’t until I saw it on the black and white news when I got home that I knew I’d scored. Nobody remembers my goal though because the week before, Pat Jennings had scored against Alex Stepney at Old Trafford and that was on Match of the Day.”

Shilts picked up the first 20 of his 125 England caps whilst at Leicester, going on to play in the 1982, 86 and 90 World Cups as well as the horror show of Euro 88. Had he not been sharing duties with Ray Clemence for much of the late 70s and early 80s, he would have been nearer 200.

Shilton was the final piece of Brian Clough’s Nottingham Forest jigsaw, transforming them into First Division champions and then back-to-back European Cup winners in 1979 and 1980.

He retired from England duty after the 1990 World Cup and finally called time on his Football League career aged 47 at the end of the 1996/97 season.