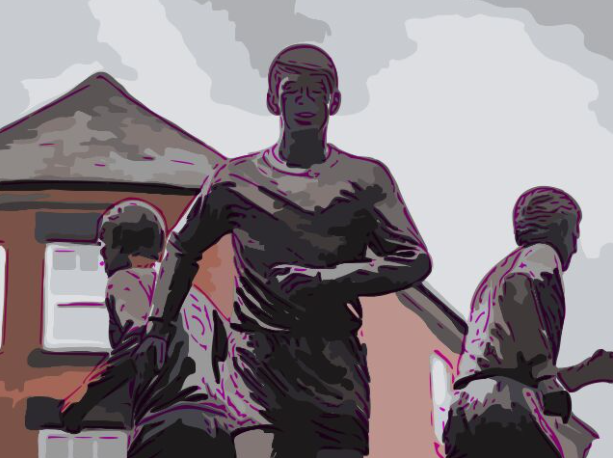 To anyone growing up in the 80s, the 1970s seemed fairly contemporary, all told. Alright, so the fashions and haircuts looked a little outlandish in photographs. However, looking back upon the decade that followed, the adage of people in glass houses being ill-advised to throw stones springs to mind. As a youngster, I distinctly remember buying out-of-date football annuals at car boot sales and – through this seemingly innocent portal – the names of many of the heroes of the era became etched on my mind alongside (what were then) more modern names like Ian Rush and Gary Lineker.

One piece that I distinctly remember digesting from this trove of footballing memorabilia focused on Everton’s Holy Trinity – Howard Kendall, Colin Harvey and Alan Ball – and revisited the way they had romped to the title in the 1969-70 season. It lavished praise upon their fluid playing style and their inventiveness. Looking back, as an impressionable youngster, fifteen or so years after the triumph in question, the idea that the club had been at the pinnacle of footballing prowess in this previous era didn’t seem outlandish – indeed, it was perfectly plausible. Yes, the photographs had that strange slightly-too-brilliant sheen that marked them out as products of Kodachrome, but Everton remained a top side that had won the League very recently: 1984-85 and 1986-87. They were the team of Paul Bracewell; Kevin Ratcliffe, Kevin Sheedy, Neville Southall, Peter Reid et al.

However, looking back from the high hill of 2022, the picture is very different – their FA Cup victory in 1995 suddenly looks like a rather lonely accomplishment. How many impressionable youngsters would readily accept the idea of a title-challenging Everton now, I wonder? The sad truth, I expect, is very few. For anyone born in this millennium, Everton have – to all intents and purposes – been the lesser of the two Merseyside clubs, and the gap between them has only grown as time has passed. In 2004/05, they finished fourth. This (followed by a trio of number 5 finishes) is their best League placement since the new millennium; it hardly suggests prospects of European glory. At the point of writing, Everton currently sit 18th in the table – in the drop zone for the first time this season. Of course, that might change; Frank Lampard may – in time – prove just the tonic that they need. However, right now, the club are looking down the barrel of a relegation battle. And, they are a club – lest it be forgotten – that has competed in the top flight for a record 118 seasons.

In this era of the superstar footballer where the Premier League is awash with money, Everton simply do not have the capacity to compete with the top clubs. If their purple patch of the 1980s is symbolic of simpler, more egalitarian footballing times, then the 1969-70 season seems positively ancient in comparison. In truth, half a century has passed since that halcyon era, but many are the football nostalgists whose eyes mist over and whose voices take on a reverential tone when they look back on the Holy Trinity.

So, what made them so special?

Well, before we consider them together and try to ascertain what it was about their combination that created such a midfield synergy, it is worth taking some time to view them as individuals.

Liverpool native Colin Harvey was apprenticed to his hometown club in 1960. He made his debut at age 18 and became a first-team regular in the middle of the decade. The nickname given to him by fans was ‘the white Pele.’ Hyperbole aside, it is a testament to the flair, grace and agility that he consistently demonstrated to those on the terraces. Indeed, he won any number of plaudits, with Kenneth Wolstenholme describing him as ‘a beautiful footballer this boy’ in the 1968 FA Cup Final, and George Best famously praising the Everton team of this period as ‘…a delight to watch and, indeed, play against.’

While attempting to rank the comparative abilities of great players is often a fool’s errand, there are many who have claimed that Harvey was the most skilful of the magical trio. Indeed, his manager – Harry Catterick – described him as being ‘…the best of the three.’ If any readers wish to contest Catterick’s assertion, then they would be well-advised to seek out Harvey’s sublime solo goal against West Bromwich Albion at Goodison Park that clinched the title first.

Alan Ball was already established as a notable midfielder, having joined Everton in the wake of his World Cup winning success with the national team in 1966. He had become Blackpool’s youngest ever league debutant at a mere 17 years of age, eventually leaving the Seasiders for what was then a record transfer fee of £112, 000. In his time at Goodison Park, he represented the club 259 times and scored 79 goals.

As well as success in the League with him in the side, the club narrowly lost the FA Cup Final to West Bromwich Albion in 1968. They also reached the competition’s semi-finals in 1969, where they were dismissed by the Baggies once more, and they faltered at this late stage again in 1971 when Merseyside rivals Liverpool beat them before losing at Wembley to double-winners Arsenal.

Howard Kendall worked his way up through the ranks at Preston North End. Like Ball, he also established himself as a first-team player at an early age, becoming – at 17 years and 345 days – the youngest player to participate in a Wembley final. On that occasion, the Lilywhites were runners-up to West Ham United’s 1964 edition. Kendall joined the Toffeemen in 1967, slotting into the midfield and helping the club to victory in 1970’s Charity Shield. In 1971, he became club captain.

As the 1969-70 season got underway, Everton went out of the blocks to a flying start; they won 6 out of their first 7 games. These included victories over big-hitters such as Arsenal and Leeds, and Manchester United (twice). Indeed, it wasn’t until 6th September 1969, that they were defeated. On this occasion, it was 2-1 to Derby County at the Baseball Ground. After 18 games, they had won 15, drawn 2 and only lost 1 and so, come 1st November 1969, they led the table by 8 points from Leeds United and Liverpool who were tied on 24 points. The margin was quite remarkable – it should be remembered that this was a time when a win secured teams two points rather than the three it does today.

Over the course of the season, Everton only lost 5 games in total. However, one of these was to Leeds United – the Yorkshire club who mounted a spirited challenge in a title race that became a lot tighter than it looked like it would do in November. As the new decade dawned, Leeds were only one point adrift of the Merseyside club (albeit with them still having a game in hand). Come the start of February, the two clubs were tied on 46 points – Everton once again having played one game less. And, by the time March came around, Leeds United were in pole position. The men in white had 51 points whereas the men in blue boasted 49 with a precious game still in hand. Footballing wisdom holds that games in hand are all very well, but you have to win them and, in this endeavour, the Toffeemen’s Holy Trinity shone.

By 20th March 1970, Everton were once more at the helm; they were positioned 3 points clear of their rivals but it was the Yorkshiremen who now had a game in hand. Leeds, though, blinked first: Southampton finished the season in 19th place, just above the relegation zone, but – on 28th March – they went to Elland Road and defeated Leeds 1-3. Hot on the heels of that result was the Peacocks’ capitulation at Derby County 2 days later where they were trounced 4-1.  As it was, Everton secured the title on 1st April with a 2-0 home victory over West Bromwich Albion and finished the season nine points clear of second place. Kendall, Harvey and Ball dominated the midfield and dictated the pace of matches throughout.

While this is an article about the Holy Trinity, it is nevertheless important to remember that three men do not make a team – in the best instances, world-class players inspire those around them. Although the magic trio were the cherries atop the cake, there were plenty of other players upon whose shoulders they stood. Among them were: England international Gordon West as goalkeeper; club legend and England international Brian Labone; Keith Newton, and Joe Royle.

Great teams tend to ‘happen’ – they coalesce under the radar and, suddenly, as if attached to a rocket, they soar for the stratosphere. This is still the case. Even in this era of ‘Moneyball football’ when players’ attributes are statistically analysed to the Nth degree and line-ups are frequently informed by sabermetrics, there are still elements of the mystical. It is possible to plug endless data into spreadsheets, but there still must be an awareness of the magical land were 1 and 1 add up to 3 and poetry and romanticism takes over. It’s what lends sport its unpredictability; it’s what makes it so fascinating. Peter Taylor understood this – he’d pick the players and Clough would trust his Hyperborean-beyond-the-north-wind insight. And everyone knows the incredible effect it had upon Derby County and Nottingham Forest…

This, it seems, is along the lines of what happened here at Everton. Fortuitously, the trio were all baby boomers, with Harvey being born in 1944, Ball in 1945 and Kendall in 1946. As a result, they were all perfectly placed to blossom and form the nucleus of the all-conquering Toffeemen of the time. Not only that, but they had all established themselves as first team players at a very young age, so they were already seasoned professionals by the time their golden season arrived.

It is interesting to note how even great line-ups only work in specific contexts, though; while they were peerless as the Holy Trinity, the individual exploits of those concerned did not readily transfer onto the international stage. Yes, so Alan Ball won 72 caps as a mainstay for the England teams of both Alf Ramsay and then Don Revie. Harvey, although lauded as a club player, only represented his country once at full international level – this was in 1972 in a European Championship qualifier against lowly Malta. Howard Kendall was never capped.

While not quite a ‘flash-in-the-pan,’ League victory in 1970 was not the harbinger of future success that many believed it would be. The side suffered a dip in morale in the 1970–71 season and slumped to a 14th place finish. Their comparative loss of form was compounded by the sale of Alan Ball to Arsenal for another record transfer fee – £220, 000. The side–shorn of one-third of its Holy Trinity and now captained by Kendall finished 15th in the 1971 – 72 season and 17th the following year.

Are there any conclusions to draw here? Perhaps. Great teams will always happen, and incredible seasons will come to pass. Building dynasties is something entirely different. Yes, the Everton team at this juncture were astonishing and, yes, they conquered all comers, but in the grand scheme of things, their success was somewhat fleeting. That said, when they were good, they were really good. There is an excellent documentary which was produced by EvertonTV, entitled The Story of 1969/70 – Everton: Champions of England about this season which is well worth a watch. And, if you’re feeling particularly in need to perking up, then check out Harvey’s title-winning goal.

Go on – I dare you. The footage is grey and grainy, but the magic shines through – it could even bring a smile to the face of a Liverpool fan!