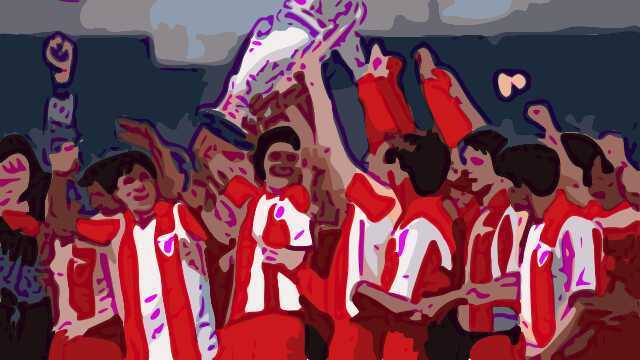 Yugoslavia, nestled behind the iron curtain as a close ally of the Soviet Union for so long, began to splinter and teeter on the brink of collapse as the Soviet Union came down at the beginning of the 1990s. Coming apart at the seam and immersed in political change, the country hadn’t stood out as a potential home of the European Cup winners to be for the upcoming 1990/91 season. Little attention was afforded despite a handful of their players featuring for the Yugoslavia side that came so close at Italia 90, faltering at the quarter-final stage to Argentina.

Red Star Belgrade, its name a token reminder of Serbian nationalism, was one of the most gifted sides in Europe, to few people’s knowledge. They would fly under the radar as the European Cup kicked off in its knockout format for the last time in September of 1990.

Croat Robert Prosinečki was the gold standard midfielder that fashioned Red Star’s attacks; a playmaker that bled class with every touch of the ball, even if he as the go-to man for a comprehensive list of UK casinos online!

Adhering to his controversial tendencies, he would refer to his smoking habit in typical Prosinečki renown:

“I KNOW THAT SMOKING IS NOT GOOD FOR AN ATHLETE, BUT IT RELAXES ME. IT’S THE ONLY VICE I HAVE. ALSO, NOBODY LIVES A HUNDRED YEARS.”

Benefiting from Prosinečki’s supply was Dejan Savićević and Darko Pančev who would lead a dynamic attack that formed a strike partnership on par with any of the world’s best. Pančev’s ruthless finishing ability and Savićević’s pace and ability to drop slightly deeper made the pair a well-balanced tandem.

Miodrag Belodedici was as storied a footballer as they come. A centre-back, he was known as ‘the deer’ for his elegant way of defending. In 1989 he had fled to Belgrade from Bucharest, where the totalitarian Ceaușescu regime would sentence him to a ten-year jail term in absentia for treasonous acts. Despite an offer from Partizan Belgrade, Belodedici was determined to sign for Red Star and upon hearing of his interest it was not long until his wish was granted.

In 1986, he had helped Steaua Bucharest become the first eastern European club to win the European Cup, defeating Barcelona on penalties in Seville.

Red Star could boast of a concoction of some of the finest footballers east of Berlin, making them formidable opposition for anyone.

Therefore, when Graeme Souness’ Glasgow Rangers were matched up against Red Star in the second round of the European Cup, assistant manager Walter Smith was tasked with a trip to Belgrade to investigate. Upon returning to provide his report, Smith, with a brazen yet accurate summation of the events that would follow, famously declared: “We’re fucked”.

Rangers, an excellent side in their own right who had been dominating Scottish football at the time, was unable to match the pace of Red Star as they fell to a 3-0 defeat in front of a packed Marakana. A 1-1 draw at Ibrox in the return leg was enough to clinch the tie. The Red Star players’ desire to work for each other on the pitch was difficult for other teams to replicate, a trait that all great sides have in spadesful. They performed collective football at a time when socialism was disintegrating faster than ever at home.

In the quarter-finals, Red Star would again prove too strong as they dispatched of East German champions Dynamo Dresden 6-0 on aggregate.

European stalwarts Bayern Munich awaited in the semi-finals. The following two legs characterised Red Star’s identity; a dogged perseverance bred with devastating counter-attacks as ferocious as the Marakana atmosphere itself. They would fall behind in both legs, recovering to a 2-2 draw in Belgrade and winning 2-1 away in West Germany, where they scored two breath-taking goals that offered a lesson in counter-attacking play – taking the ball the full length of the pitch in just 12 seconds to score the equaliser.

Red Star would be out to make history at the Stadio San Nicola in Bari and become the first Yugoslav club to hoist the European Cup aloft. The opponents would be a Marseille side that was looking to be the first French club to lift the trophy. Their daunting team sheet would include such names as Jean-Pierre Papin, Chris Waddle, Jean Tigana, Abedi Pele and former Red Star favourite Dragan Stojković. It was a scary blend of footballing talent sourced by Bernard Tapie, a French businessman and politician.

In the build-up to the match, Red Star players were forbidden from receiving calls to their hotel rooms in fear of younger players being distracted by the sustained interest from big European clubs. Their squad was incredibly youthful and untried in such a relentless media environment.

Former players, coaches and even Serbian celebrities flocked to the Adriatic Coast upon invitation from the club. The occasion would not go amiss.

However, the guests who had made the journey would not witness a European final full of transcendent attacking football that had taken both teams thus far. Red Star opted for a surprisingly pragmatic approach, sacrificing their forward threat in order to stifle Marseille. Both sides had scored at least four goals in every preceding round and so 120 minutes of goalless inaction could not have been foreseen.

“I REMEMBER (MANAGER) LJUPKO PETROVIĆ TELLING US: ‘IF WE ATTACK THEM WE’LL LEAVE OURSELVES OPEN FOR COUNTERATTACKS’, TO WHICH I ASKED ‘SO, WHAT DO WE DO THEN’. HIS ANSWER WAS: ‘WHEN YOU GET THE BALL, GIVE IT BACK TO THEM’.”

Penalties ensued and Red Star shifted to firm favourites. The Yugoslavian league had settled drawn matches that season by way of penalty shoot-outs, leaving the Belgrade side well accustomed to spot-kicks. Additionally, two of Marseille’s most revered players, Waddle and Stojković, would not place the ball on the penalty spot in Bari, assumingly remindful of their missed penalties less than a year before at Italia 90.

Pančev would step up and score the winning penalty for Red Star on his way to finishing runner up in the Ballon d’Or and claiming the European Golden Shoe.

Red Star had achieved a special feat, only overshadowed by the fact that they had to return to a country on the cusp of collapse; for if not, there is every chance that they would be remembered as one of the greatest sides to play the game.

Unfairly, this was not to be and within a couple of years, the team would be almost unrecognisable. Pančev, Mihajlović and Savićević would all depart for Italy whilst Prosinečki and Belodedici headed to Spain. Belodedici left as the first player to win the European Cup with two different clubs.

Yugoslavia itself was close to unrecognisable. One month after the final in Bari, the first of four republics declared independence and the course for conflict in the Balkans was set. The following year, Yugoslavia would be expelled from Euro 92 as the country descended into civil war.

The Balkan countries have never been able to retain such talented players since the golden generation of the 1990s, constantly suffering from a talent drain westward that can account for why no eastern European club has reached the final of Europe’s top club competition since. Instead, football fans are left lamenting over what could have been of that great Red Star Belgrade side that had its moment in European fame so prematurely snatched away.