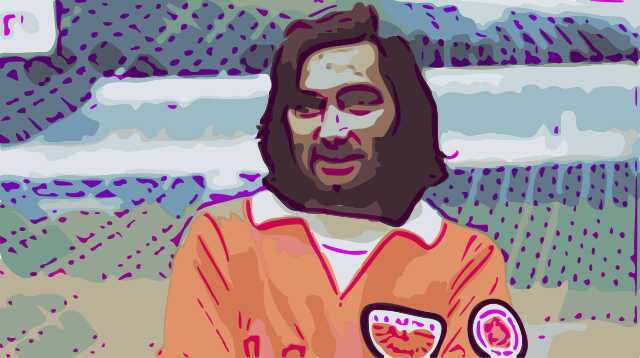 Glitz, glamour, and George Best. What could possibly go wrong?

The United States had never really had a successful professional domestic league. But after the worldwide interest in the 1966 World Cup, organisers decided the time was right to give it a go. The North American Soccer League (NASL) was launched in 1968, and interest grew steadily until it exploded when Pele signed for New York Cosmos in 1975. Pretty soon the competition became a who’s who of world football. Franz Beckenbauer,  Gerd Müller, Carlos Alberto, Johan Cruyff, Gordon Banks, Bobby Moore and Eusébio were all attracted to its riches and glamour.

Against this backdrop players such as Rodney Marsh and George Best were tempted. In fact, the NASL and Bestie seemed made for each other.

Best had fallen out of love with football as his club, Manchester United, had become bored of his antics and unpredictable behaviour. Looking back you can’t help but feel a little sorry for him.

Many have suggested the club’s management could have done a better job or reining him in. Others have suggested he would’ve rebelled no matter what help was offered.

He quit the club in January 1974 at the age of 27. They denied him a deserved testimonial and also kept hold of his registration. Eventually, he was contractually free in 1975. America offered him money and anonymity. How could he refuse?

He joined Los Angeles Aztecs and bought a house on Hermosa Beach. The franchise was launched in 1974 and a year later Elton John bought a stake in the team. They immediately announced Best was going to sign for them and sure enough in February 1976 he arrived.

The two seemed a marriage made in heaven almost straight away. As he touched down the club had arranged for an attractive brunette, Linda Cardoza, to greet him. Wearing a t-shirt emblazoned with “George does it Best”, she accosted him by handcuffing herself to him.

Best played along with this as his t-shirt read “Who the Hell is George?”. It was all a gimmick but it did the trick in catching the attention of the waiting media.

Having signed a contract that was almost as good as Pele’s, he proceeded to tell reporters he believed he was better than him. He followed this with a rather ominous;

“It’ll take a while to adjust but I think I’ll play all right if I don’t get into any trouble.”

He didn’t specify the type of trouble he envisaged but it didn’t take a genius to wonder what he was on about.

The NASL appeared made for him. Razzmatazz, music, cheerleaders and a general ‘feel-good’ attitude to the sport seemed right up his alley. Six points for a win and no draws. Stalemates were decided by a shoot-out with players starting on a 35-yard line and given five seconds to beat the keeper. He got himself fit and appeared to be really enjoying his football again. He scored 15 in his first season, including one on his debut against Rochester Lancers. They reached the playoffs, losing to Dallas Tornado.

The following season he scored twice as they beat Pele’s Cosmos at the LA Coliseum in front of the second largest crowd ever seen at the stadium. It was Pele’s last appearance in LA. Best was playing alongside players such as Londoners Terry Mancini and Charlie Cooke, both of whom had a bit of a  reputation for ‘enjoying life’.

By May 1977 the Los Angeles Times ran a story claiming him to be a part-time player and recounting stories of his misdemeanours both at home and abroad. They stated he could’ve been the best player England [sic] ever saw if only the girls of Britain had left him alone.

Best had agreed a contract with Fulham, then a Second Division team, to play during the winter when the NASL shut down. He showed glimpses of his talent but in the end, the two fell out. He was joined briefly on the banks of the Thames by Marsh. The two just egged each other on.

By then alcohol had already taken hold of him. But alcoholism in the 70s wasn’t viewed as an illness as it is today. It was almost seen as a badge of honour, something to be proud of. George was spiralling downwards.

In London, he crashed his car into the entrance to Harrods. He started to miss training sessions, then matches at Fulham.

Back in LA, the same thing happened. This was reminiscent of his Old Trafford days. After missing two training sessions the Aztecs owners demanded a meeting. He promptly missed the next session and consequently they suspended him. A month later he moved to the East Coast to Fort Lauderdale Strikers.

He flew to Florida on the day of his debut against the Cosmos, then Soccer Bowl champions and now minus Pele. The Strikers scored five and it looked like a new chapter was opening for Best.

He spent two seasons there, scoring six goals in 28 appearances. In the close season, he shocked everyone by turning out for Hibs in the Scottish Premier Division. Although he couldn’t stop them from being relegated, he improved their attendance dramatically.

Back in the States he now moved back west to San Jose Earthquakes.

Life was beginning to unravel. He was now married to Angie. The pair met at a party in LA and tied the knot in January 1978. Angie was a model and former Playboy bunny and had been working as Cher’s personal assistant. She sounded ideal for George. A year before they married he had sunk $30,000 into a bar he named “Bestie’s”. By the time of the ceremony, he was almost broke.

Denis Law has stated he believed Best signing for the Earthquakes was “utterly demeaning”. They were the NASL’s worst team.

Marsh commented on the situation;

“He was a stone overweight, drinking heavily and in never-never land.”

He missed his debut. No prizes for guessing where he was.

In February 1981 George and Angie had a son, Callum. George began to pull himself together.

Former Wolves keeper, Phil Parkes, arrived in San Jose. He says George was the finest player he ever played alongside.

“By the time I got to know him, George had pulled himself around. They had just had Callum and in the four to five months I was in San Jose he didn’t drink. He trained with us every day and he would take the American kids for sessions. We’d heard all the stories but he was different class.”

Parkes was talking to Tim Rich and he gave more insight into life with George back then;

“We went on a tour to Belfast where at Linfield the crowd was so big they had to put back the kick-off time, and then we went to Hibernian, where I remember George giving an interview to Jeff Powell of the Daily Mail.”

“It was staged in a nightclub in Edinburgh so it was almost designed to go wrong but he drank nothing more than orange juice. We were all so proud of him.”

Around this time Northern Ireland were getting ready for the World Cup in Spain, their first appearance in the tournament for 24 years. Rumours were rife Billy Bingham was going to take him along. He was unlikely to play in every game but what a coup it would’ve been to see him on the world stage along with Zico, Socrates, Maradona, Paolo Rossi, Zbigniew Boniek, Michel Platini, Karl-Heinz Rummenigge and Kevin Keegan.

He was working really hard on his fitness, but it was while they were in Edinburgh that Bingham decided to take a look. San Jose were poor in a friendly match and in Best’s words they “got slaughtered”.

Bingham had seen enough and chose three uncapped players instead of one of the most famous men on the planet.

Angie knew she had to get them out of San Jose.

She recounted a story of when she was taking their one-year old son to the doctors, driving through the rain. Through the downpour, she became aware of a figure stumbling along the road in front, huddled against the elements.

She thought it was a tramp, a drunken bum. Then as she got closer she realised it was her husband. She knew then they had to leave. She also knew their relationship was over.

Best’s last season in the States was relatively successful on the pitch. He was voted into the NASL All-Stars Second team. He scored 13 goals during a season where he missed just one game.

They were the last goals George Best would ever score in a professional football match.

He did, however, score one of his greatest ever goals during his spell in San Jose. It came against Fort Lauderdale and footage can be found on Youtube with the commentator claiming “that is the greatest soccer goal I have ever seen.”

Arriving back home he tried to get a deal with Bolton Wanderers. When that fell through he was offered a contract in Hong Kong. After turning out for a couple of clubs he returned to England to a deal with Third Division Bournemouth in late 1982. The remaining years of his career were punctuated with a few appearances here and there with various clubs as well as a few testimonial (not his) and exhibition games.

The NASL ceased to exist in its format in 1985. All the celebrities were long gone by then.

Best passed away in a London hospital on 25 November 2005.