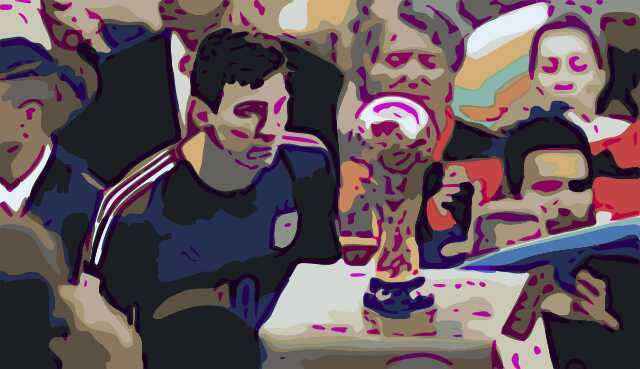 How dear we hold a memory is determined by its capacity to make a person feel in a unique way.

This is why the last ones are appreciated more. Against the well known fact that “everything has to end”, we tend to get complacent and show less appreciation than should have been invoked.

This year’s tournament in Qatar is probably Lionel Messi’s last World Cup. This is his 5th time. In 2006, when he was only 19, Messi became the youngest Argentinian to play and score in a World Cup. His late cameo against Serbia & Montenegro at the group stage consisted of an assist for Hernan Crespo and a goal for himself.

Out of his other three attempts to crown his country as “The best of the world”, the closest he came was the 2014 World Cup. There, he was only 90 minutes away from the moment he probably dreamt about more than any milestones or silverware that he managed to earn throughout his star studded career.

This is Lionel Messi’s story of “almost” when he came much close to living up to his otherworldly reputation.

Their first opponent was Bosnia & Herzegovina. Their nervous start only lasted two and a half minutes, as Sead Kolašinac tapped Leo Messi’s cross perfectly into his own net. They had to wait 62 minutes for the second, when Messi’s one-two with Higuain ended up in the net. It was his first World Cup goal in 8 years, the first since he scored against Serbia & Montenegro in 2008. Vedat Ibisevic scored a consolation late on, with the game ending 2-1.

Carlos Queiroz’s Iran was their next challenge. Their wasted chances early on in the game were gobbled up by a compact defensive line. Iran was denied a lead by Sergio Romero’s heroic display, and were then robbed of a penalty when Zabaleta’s chop on Dejagah didn’t seem to be enough to the eyes of the referee, Milorad Mazic.

Just when the deadlock seemed to endure the full 90 minutes, Messi threaded the needle in the first minute of additional time and presented his country with their second win out of two.

They then clashed with Nigeria for the top spot of Group F. As the first half finished, Argentina had only been in the lead for less than five minutes, despite Messi’s brace, one of which was a free kick. Ahmed Musa -scorer of Nigeria’s first- was on target again at the start of the second half to pull Nigeria level again. Three minutes later, Marcos Rojo’s knee gave Argentina the lead once more,and they managed to get three wins out of three.

Messi had entered the tournament with only one World Cup goal. By the end of group stage, he’d have five.

Round of 16 vs Switzerland

After a favourable draw, Switzerland was La Selección’s next clash, which remained level thanks to a 118 minute long showdown by goalkeeper Diego Benaglio. Then Angel Di Maria placed a firm, yet gentle touch at the end of Leo Messi’s layoff and fired the “La Albicaleste” to the quarter-finals.

Well thought-out strategies had gotten Argentina this far. Then came the “finals” stage. So the first significant threat to end of the fairy tale, in the form of Belgium’s golden generation.

After Sergio Agüero was forced to leave the pitch in the first half of the Nigeria game, Gonzalo Higuain’s shoulders were carrying more weight than ever. He delivered in the blink of an eye, with a volley after Di Maria’s attempted through ball found its way past Thibaut Courtois.

In the second half, Higuain sparkled again. His 40 yard dribble ended with a shot cannoning straight off the crossbar, which denied him a brace. Courtois was able to keep Belgium in the game when he kept Messi from scoring. Despite being one behind, he looked hyped. After all, why wouldn’t he be? “Vamos” he chanted. But his fellow countrymen couldn’t find an opening in Argentina’s defence. Argentina progressed to the semi-final.

Semi-final vs the Netherlands

Arjen Robben & co. were the only obstacle left between them and the final. They could almost smell it.

The Netherlands, avoiding making the same mistake as the Swiss, managed to hold on for 120 minutes. Javier Mascherano had to make a full stretched sliding tackle to keep Robben’s shot from going anywhere near Romero. In extra time, Rodrigo Palacio wasted a chance with the weakest of headers.

Peter Drury commentated; “some can barely watch”, when Ezequiel Lavezzi was shown praying on Argentina’s bench during the penalty shootout. But more than a mere spectator, Romero dominated, keeping Ron Vlaar and Wesley Sneijder’s attempts out. While making the run to their heroic goalkeeper, every player thought of the same headline – “Argentina win the World Cup in Rio”.

If host Brazil’s crash out of the cup by conceding seven goals in the semi-finals didn’t unleash a riot, witnessing Argentina celebrate in Rio could have done it.

Only 90 minutes kept Argentina from glory or agony. Destroyers of Brazil, Germany were the final villain to try and keep “Albicelestes” from sitting on the top of the world.

Toni Kroos laid a perfect misdirected header for Higuain to be through on goal, but Napoli’s center-forward dragged his first time shot wide. Then, the only protection the Argentines had from Höwedes’ header from a corner was the post. An opportunity then revealed itself but Messi was only inches wide of a dream ending. Another extra time period was imminent.

Rodrigo Palacio continued to fumble chances when he horribly misjudged and couldn’t keep his uncontested chip on target.

Dying moments of games had seem to be serving Argentina throughout the tournament. But then one came to haunt them in the final.

Mario Götze, a late substitute for “World Cup History’s Top Goalscorer” Miroslav Klose, was there to control Schürrle’s cross with his chest and fire it past Romero. Argentina couldn’t muster their forces to invoke a recovery, in the remaining seven minutes of the extra time period.

The Argentinos fell to their knees while Brazileiros’ relieved exhales disappeared into jubilant cheers of Deutsche. For Messi, it meant he wasn’t able to emulate Diogo Maradona’s iconic stature by lifting the World Cu. He was so close, yet so far.

Four years after coming up just short, Argentina’s 2018 campaign was ended earlyby the eventual champions France in the quarter-finals stage. It means that Messi now has just one final chance Qatar, in order to complete his sacred task.

Time will tell if he is able to achieve it.