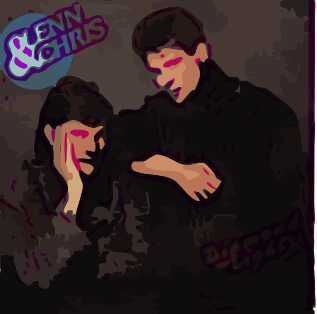 Thursday, April 23, 1987. Sandwiched in between Tom Jones and Madonna on Top of the Pops is a performance by two aspiring pop stars, appearing in the BBC studios for a debut that will hopefully propel their first single up the charts. Gary Davies – or ‘Ooh, Gary Davies’ to give him his full title – introduces the duo.

There is nothing unusual in all of this so far. Yet these two TOTP virgins are anything but your standard pop stars. Glenn Hoddle and Chris Waddle have swapped their normal stage for a completely alien environment. With a ball at their feet, they are fine. But with a mic stand, it is a different story.

How had the Tottenham midfielders arrived at this point? Singing at a Budget rent a car awards night in 1986, the pair impressed friend Pat Nelson, who in turn contacted songwriter Bob Puzey. “We were singing Beatles songs, the only ones we could remember,” Hoddle explained at the time. Puzey, who had written for The Nolans, had a plan.

Listening to Hoddle and Waddle at his house in Barnet, Puzey wrote Diamond Lights, a song about his wife’s eyes: “Eyes that freeze like ice, Cold electric blue those diamond lights.” After recording the song, eventually a record company – Record Shack Records – signed a deal for the single.

The single would be released by Glenn and Chris in April 1987, just a couple of days after Tottenham had beaten Watford to reach the FA Cup final. But why did the pair choose to be called Glenn and Chris, rather than the more obvious Hoddle and Waddle name?

“We didn’t want everyone to associate us with football, so we decided on Glenn and Chris,” Hoddle stated. In the brutal banter-filled environs of a football dressing room, Glenn and Chris revealed that their teammates referred to them as Spam, rather than Wham – a lovely play on words, there – but Hoddle declared that there was some appreciation of the song in N17.

“It’s true we were given a hard time but that was before they heard the record. All the boys are singing it now – they love it,” Hoddle protested. Entering the charts at number 30 on April 18, it appeared as if the UK public – with the possible exception of Arsenal fans – were also enjoying the single.

The song had been played three times by Davies on his Radio One show as a “mystery disc” feature, with the Daily Mirror reporting that the BBC switchboard had been jammed with inquiries relating to the identity of the singers. Even though footballers and music had an uneasy relationship, the fact that Diamond Lights was being performed by two England internationals did little to slow its progress up the charts.

By April 25 the song had reached number 17, leading to a frightening prospect for the pair: an appearance on Top of the Pops. “I’d be terrified,” Waddle admitted at the thought of singing (or miming) the song live. “I’ve never done it before, so I’m sure I’d be nervous.” Conversely, Hoddle was singing from a different hymn sheet. “I don’t think it would worry me, it’s just part of the job.”

The TOTP performance was certainly memorable. Waddle, dressed in jeans and a black suit jacket, was clearly uncomfortable. Hoddle was true to his word; sporting a white jacket and a Waddlesque mullet, he appeared to be enjoying the experience.

Speaking in the Daily Telegraph in 2002, Hoddle revealed that he embraced the day.

“One of the greatest things I ever did was to do a live appearance on Top of the Pops. It was as challenging as anything I’ve ever done because – put yourself in them shoes – I did it, I’m glad I did it and I learnt a lot from it. My word, was that nerve-racking.”

It may have been a song lasting just shy of three minutes, but looking at Waddle’s body language, it must have felt like a lifetime. Shuffling from foot to foot, like he was standing on his very own tiny seesaw, Waddle looked as awkward as many of us would have in his shoes, as he waited for Glenn to get to the chorus.

The performance was far from perfect, although it is easy to criticise from the comfort of your own front room. Hoddle forgot to mime one of his “Darling, I love you” lines, and Waddle later admitted that it was the most nerve-racking thing he had ever done. But at the time, the record-buying nation did not seem to mind.

A week later, the record peaked at number 12, and Diamond Lights spent a total of eight weeks on the charts. But second single syndrome kicked in for the pair. It’s Goodbye only reached number 92 in the UK, and that was it for Glenn and Chris. Waddle put the failure down to the fact that Hoddle moved to Monaco, and they could not promote the follow-up.

But maybe it was better that the pair are remembered for their one hit. Or is it? Time has certainly not been kind to the duo. The single has a cheesy 1980s feel about it, although Diamond Lights is definitely not alone in that regard. Five Star were the first act on TOTP on the same night as Glenn and Chris. Enough said.

Some were openly critical at the time. “I think their best pitch is the one with grass on it,” Louise Court wrote in the Express. As footballer’s songs go, it was far from as naff as many others. Yet in subsequent years there has been many a scathing opinion regarding the song and that performance of TOTP.

In 2000, the Sunday Express pondered whether Glenn and Chris’ appearance was one of the most dreadful moments in television history. Four years later, an article in the same paper stated: “The Eighties hit rock bottom when the footballers entered the charts with the lamentable Diamond Lights – four left feet, two mullets and a pair of ventriloquist dummies in bad suits.” Harsh.

In 2006, the Daily Star listed Diamond Lights as one of the songs that could be played on “mega sound systems” to keep “ASBO yobs” off our streets. In 1996, the Telegraph’s Henry Winter, discussing Hoddle’s appointment as England manager, managed to get a sly dig in.

“Although not the FA’s first choice, Hoddle clearly has many admirers within Lancaster Gate. His unblemished image – unless Diamond Lights, that woeful duet with Chris Waddle, is taken into account – helps explain the length of his FA contract, twice that of Venables.”

Speaking in 1997, Waddle defended the song.

“I’m certainly not embarrassed about making the record, or worried about the stick that came with it. Too many people don’t have the courage to do what they really want to.”

“We always said that if we made a record, it would be a proper one. We didn’t want to just do a ‘here we go’ number. I certainly don’t regret making it because I’m one of those people who will do something rather than live and regret it. What’s the point of going through life and thinking, I wonder what might have happened if we had done that?”

It was far from perfect. Yes, it was a bit corny. Yes, the TOTP display is a little toe-curling. Yet at least it was a little different. Better Diamond Lights on TOTP than Hot Shot Tottenham on Blue Peter. Now that’s what I call embarrassing.