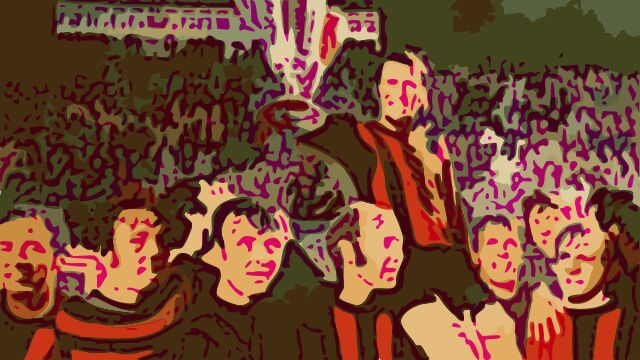 Four Premier League titles in the past five seasons and with undoubtedly one of the best teams in the world, Manchester City have emerged as football’s new dominant force.

However, their rapid rise from obscurity to prosperity often leads to the inevitable comments from rival fans, who take great pride in the fact that City have ‘no history’.

In fairness, many of us can remember the days when City were playing in the third tier of English football so therefore the province of such comments are somewhat understandable. But, if you delve back in time to the late sixties, you will find a Manchester City team that achieved something that Pep Guardiola’s billion-pound team of today haven’t – a European triumph.

Albeit the Cup Winner’s Cup is not quite as glamorous as Liverpool’s 6x European Cup/Champions League triumphs.

But it does, however, provide a reminder of Manchester City’s often-forgotten history and their great team of the late sixties that boasted the likes of Bell, Summerbee and Lee and was guided by the perfectly complementary duo of Joe Mercer and Malcolm Allison.

So let’s reflect on Manchester City’s Cup Winner’s Cup odyssey and illustrate the club’s history that many are not aware that they have.

The men that masterminded City’s Cup Winners Cup triumph were Malcolm Allison and Joe Mercer. Mercer, a league-winning captain at Arsenal and experienced manager, led the side with Malcolm Allison, ever the maverick, his right-hand man.

While Allison attracted the majority of media attention, it was Mercer, reserved and diplomatic, that steered their partnership and Manchester City to success.

The flamboyant Allison had gained a great reputation at West Ham United for helping to mould their footballing academy of stars and Mercer was clearly impressed by the young coach’s credentials and appointed Allison as his no.2 upon becoming manager of the club in 1965.

The pair guided City to promotion to the First Division in 1966 and by 1968, they had led the club to only their second ever league championship triumph.

They had taken City from mid-second division obscurity to first division champions in just three years and created one of the most exciting sides of the late sixties.

On the pitch, Manchester City had found the perfect blend of hard-working professionals mixed with flair players most notably their famous trio of Colin Bell, Mike Summerbee and Francis Lee.

But it was a goal from Neil Young that sent Manchester City on their European adventure, with his match-winning strike against Leicester City in the FA Cup Final qualifying City for the Cup Winner’s Cup the following season.

Manchester City’s first voyage into Europe in the European Cup in the 1968/69 season had not gone well. Malcolm Allison had bullishly claimed that City would ‘terrify Europe’. They didn’t make it past the first round.

However, perhaps buoyed by that disappointment, there was a fresh sense of optimism heading into their Cup Winner’s Cup campaign the following season.

It was a tough opponent that awaited them in the first round, though, in the form of Athletic Bilbao who had taken a 3-1 lead in the first leg before City produced a remarkable turn-around to level the score to 3-3 ahead of the second-leg at Maine Road. In front of almost 50,000 fans at Maine Road, City produced a fine performance to win 3-0 and progress 6-3 on aggregate.

City’s second round opponents proved to be far less of a test, and they swept aside Belgian part-time side Lierse SK, winning 8-0 on aggregate.

In the quarter-finals, Portuguese side Academia Coimbra proved a challenging opponent with Tony Towers’s second-leg goal at Maine Road proving to be the difference between the two sides.

That solitary goal was enough to set up a semi-final with German side Schalke.

Schalke won the first leg 1-0; however, as had become the theme in City’s European run, in the second leg at Maine Road, City prevailed winning 5-1 courtesy of goals from Doyle, Young, Lee and Bell.

Manchester City were just one match away from the club’s first-ever continental triumph.

On 29th April 1970, while 28 million people were estimated to be watching the famous FA Cup final replay between Chelsea and Leeds, just 7,968 people were in Vienna watching City triumph over Polish side Gornik Zabrze.

4,000 City fans made the journey to Austria whilst the rest were confined to watching black and white highlights on BBC2. So, it was hardly the most auspicious of occasions and to make matters worse, the match was played in torrential rain, with the fans in the roofless stadium left saturated and the pitch turned into a quagmire.

City also had injury concerns to contend with, with Mike Summerbee failing a late fitness test pre-match and Doyle forced off early due to injury.

Nevertheless, the Blues took the lead after just 13 minutes with Neil Young, whose FA Cup-winning goal had started City’s European journey, scoring to put City ahead.  Francis Lee added another just before halftime – a great present for the Man City star on his birthday.

The Polish side needed to provide a response in the second half and they did. However, their 68th-minute goal proved to be a mere consolation and City were able to hold on and captain Tony Book lifted the trophy – City’s fourth in three years.

Unfortunately, City were unable to sustain their success and Joe Mercer and Malcolm Allison’s relationship soon became strained. After boardroom turmoil in 1971, Allison took over as first-team manager and Mercer was made general manager. It was a comprise that was never going to work.

Mercer left the club in 1972, later becoming the manager of Coventry City as well as being the highly popular caretaker manager of England. Allison had two tenures as manager of Manchester City and both were ultimately unsuccessful.

City won the League Cup in 1976 which proved to be their last trophy before the club was taken over by Sheik Mansour.

They spent the next three decades lost in the football wilderness, eventually slipping into the third tier, while having to watch their neighbours Manchester United go from strength to strength under Sir Alex Ferguson.

Now, however, Manchester City are the dominant force in Manchester Guardiola’s team have won all the domestic honours and are, this season, going for a third consecutive Premier League title.

However, an illustrious European triumph has still eluded City’s great team, which provides even more poignance to that night in Vienna, 52 years ago, when Manchester City won their first and only European trophy to date.