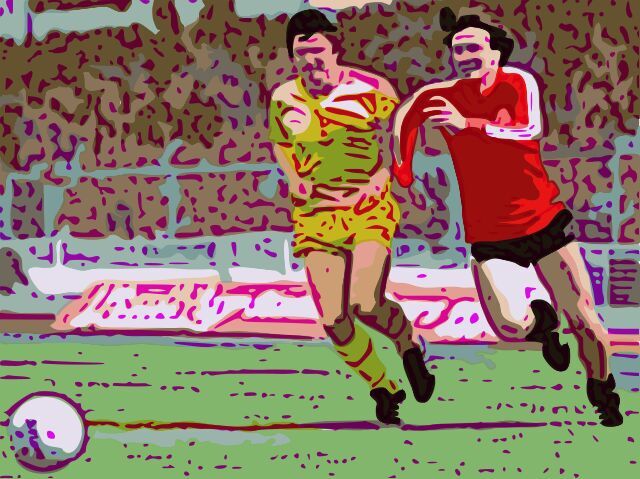 Recently there has been a resurgence in interest in retro football shirts, with the buying and selling of the same becoming rather a booming business. While some manufacturers have seen the upside of reproducing kits from days of lore, a genuine shirt from just twenty years ago can – depending on the team involved – go for upwards of £200 online.

It should be said that some of these shirts are of better quality and in better condition than others, but I must confess to having built up a reasonable collection myself over the past few years and now boast a wardrobe of some fifty or so shirts as worn by a variety of clubs over the past four or five decades.

As a connoisseur of 1970s and 80s football, I spend rather too much time than is healthy, wise or beneficial trawling through YouTube watching old matches. One anomaly that has stuck with me is an old rule that used to exist in the FA Cup concerning kit clashes.

Up to the early-mid 1980s, an FA rule stated that in the event of a clash of colours between two sides meeting on neutral ground – ie: in the final or semi-final – both sides needed to change kits unless the clubs could come to a mutually satisfying agreement. In practicality, this quite often resulted in the clubs agreeing to toss a coin to decide who got the first choice of kits, but on more than a few occasions either no such agreement could be reached or else both clubs simply agreed to change.

So it came to pass that a few FA Cup Finals, and significantly more semi-finals, were participated in by both sides adorned in less than traditional attire.

The year’s prestigious event was participated in by Everton – who normally play in blue shirts and white shorts, of course – and West Bromwich Albion, who are normally to be found sporting dark blue and white stripes and white shorts. Clearly, there was a colour clash and someone would have to be the bigger man and agree to play in an alternative strip, or else the clubs would need to toss a coin to decide. In the end, however, both sides decided to change and so Everton took to the Wembley turf in yellow shirts and socks with blue shorts, while the Albion sported white shirts and shorts and, for some reason, red socks.

When West Ham of the Second Division met London rivals Arsenal at Wembley in May 1980, both sides decided to change strips. Arsenal’s home choice of red shirts and white shorts clashed with West Ham’s preferred option of claret and blue shirts and white shorts. In matches between the two sides at Upton Park, Arsenal would ordinarily change into yellow shirts and socks with dark blue shirts, while West Ham would invariably rock up for league and cup encounters at Highbury adorned in white shirts and sky blue shorts.

While both sides agreed to change for the Wembley showpiece, West Ham’s change colour shorts were deemed to still clash with the dark blue of Arsenal’s, and so the Hammers ran out for the occasion in an all-white strip. This was, incidentally, the kit worn by the Upton Park side in that year’s semi-final clash and replay against Everton, who themselves slightly changed their colours and wore an all-blue kit.

Incidentally, Arsenal for some reason seemed to prefer to play at Wembley and in cup finals in their change kit, having made four appearances in yellow under the twin towers between 1978 and 1980, yet only winning once.

Two years later and once again both sides in an all-London final changed kits. When Tottenham met Manchester City in the 1981 final, Manchester City wore sky blue shirts and shorts while Spurs wore their traditional white shirts and dark blue shorts with no fuss. The following year and Tottenham’s colours were deemed to clash with the blue and white hoops of QPR and so both sides agreed to change.

Thus, under a cloudy North London sky, Tottenham took to the field in a rather splendid all-yellow shiny number manufactured by Le Coq Sportif, while the Adidas-clad Rangers sported a red shirt with black shorts. The match went to a replay and both sides turned out five days later similarly kitted.

As far as memory recalls, 1982 was the last time in the era that both sides changed kits for the FA Cup Final. In 1985, Everton and Manchester United met, and as both sides wore white shorts as their first choice, it was decided that Everton would change and wear an all-blue combination, and then in 1990 when Manchester United’s colours clashed with Crystal Palace, the Old Trafford side changed for the first game while Palace did likewise for the replay.

The number of kit clashes in semi-finals over the years in the 1970s and early 80s was significant and so more often resulted in all-changes. In both 1971 and 1972, Arsenal and Stoke City were drawn to play each other in FA Cup semi-finals. With the sides’ home kits of red and white obviously clashing, a change was required. Each time both sides elected to change and so Arsenal, as was their norm whenever there was a clash, took to the field in yellow shirts and blue shorts each time, while Stoke elected to wear Leeds Unitedesque all-white.

Arsenal prevailed on each occasion and in 1973 were once more at Hillsborough for a semi-final. Once again kitting out in yellow and blue, they faced a Sunderland side electing to follow Stoke in the all-white stakes. It was a case of third time unlucky as the Gunners failed to make it three FA Cup Finals in a row as Sunderland prevailed by a 2-1 scoreline.

In 1972, while Arsenal and Stoke were clashing and changing at Villa Park, Leeds United and Birmingham City were doing likewise at Hillsborough. Leeds trotted out for the occasion in all yellow, while Birmingham sported red and white shirts and white shorts as they succumbed to a 3-0 defeat.

1975 was the next time semi-finalists clashed colour-wise as Ipswich Town and West Ham United were drawn together and met firstly at Villa Park, and then Stamford Bridge when the first game ended goalless. West Ham’s claret and blue home kit clashed with Ipswich’s dark blue, and so the Hammers elected to kit out in all-white while Ipswich went for a yellow and blue outfit that made them look a bit like Arsenal. With referee Clive Thomas playing a blinder in West London, West Ham eventually prevailed by a 2-1 scoreline.

Into 1978 and Ipswich Town once more made it to the semi-finals and met their old friend Clive Thomas. This time it was to Highbury the Portman Road side travelled where Ron Atkinson’s West Bromwich Albion awaited them. The colours clashing once more resulted in yet another fashion statement being made, but this time instead of electing to go for yellow and blue, Ipswich went for white shirts and black shorts and socks, while the Albion wore their away strip of green and yellow striped shirts, green shorts and yellow socks.

The following season, 1978/79, saw perhaps the most confusing of all changes. In 1977, Liverpool and Manchester United had met in the final and had simply decided who would wear their home kits by tossing a coin. United won both the toss and the match and so picked up the famous trophy in traditional red shirts while Liverpool trudged discontentedly from the scene in white shirts and socks with black shorts.

However, when the sides met again two years later in a Maine Road semi-final, both teams were wearing alternative kits. While United sported white shirts and black shorts, Liverpool were in their third-choice strip of all yellow. It was rather perplexing, to tell the truth. Why were the sides happy to toss a coin in 1977 but not so two years later? Also, how did they choose which side would wear their third-choice kit, seeing that both the clubs’ first and second-choice strips clashed with each other?

Anyway, onwards we go. 1980, as mentioned before, saw Everton and West Ham both make alterations for their semi-final clashes, while Liverpool and Arsenal, drawn together in the other semi-final, elected to alternate changes of kit throughout the four-game marathon that prevailed.

At Villa Park in 1981, Ipswich Town were back for their third FA Cup semi in seven seasons as their treble-chasing team came up against John Bond’s revitalised Manchester City outfit. With the sky blue of City clashing with Ipswich’s dark blue, the sides both sought alternative colours. Ipswich went with a tremendous all-white silky Adidas number, while City had an equally glorious Umbro effort in red and white stripes with black shorts.

Look at those kits on YouTube, don’t they just stand out as something special?

After the 1982 FA Cup Final, the tradition of both sides sometimes changing in the event of a colour clash seems to have died a death, which is a bit of a shame really. Looking back at some of these unusual combinations makes for interesting viewing, in my opinion.