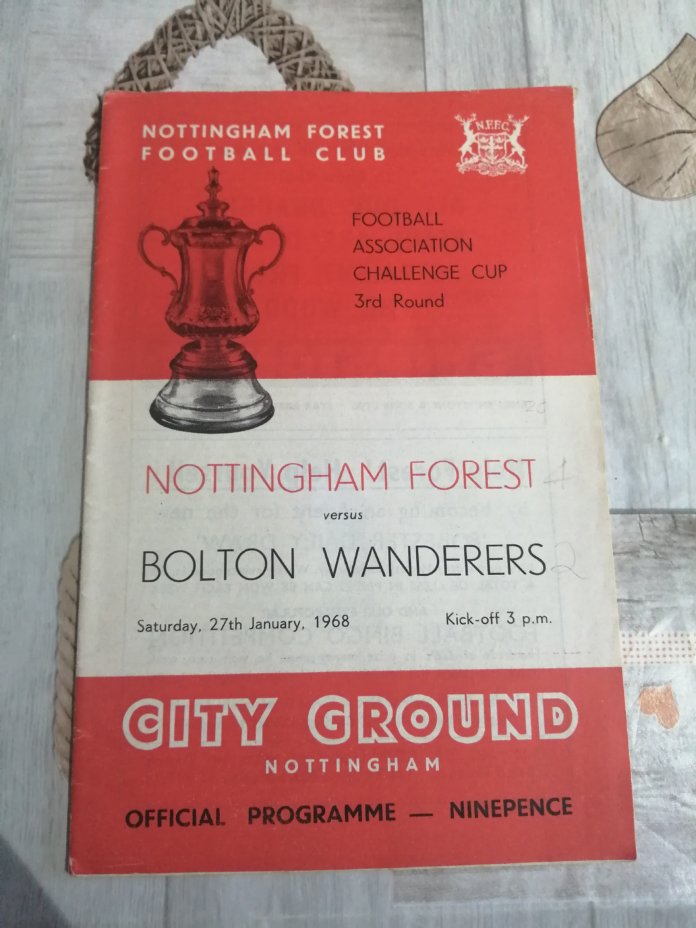 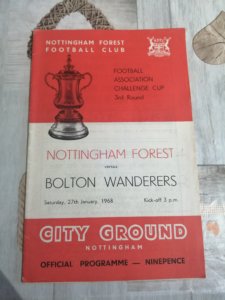 Back to 1968 for today’s review and a FA Cup fixture between then Division One, Nottingham Forest against Bolton Wanderers, who were a Second Division team at the time.

This programme consists of 20 pages from the front to back cover and is a good read.

With Page 1 being the front cover, page 2 features a full page advert with the following page titled News and Views. It is written that this game would be Forest’s 25th home cup tie since the war. The piece also looks back to Forest’s run to the semi-finals in the previous year’s competition.

Page 4 starts what is a run of several pages of information on Bolton Wanderers, probably the most information I have seen on an away side in any programme in my collection. The piece starts off by looking at Bolton’s run in the 1957/1958 FA Cup, when they beat Preston North End, York City, Stoke City, Wolves, Blackburn Rovers and Manchester United by 2 goals to 0 in the final at Wembley. The following page shows a squad photograph of the Bolton Wanderers players for the 1967/1968 season.

Page 6 looks at Bolton’s form in the current season and, although they were then in Division 2, Forest knew they would be in for a tough game as earlier in the season Bolton had knocked Liverpool out of the League Cup. The following page shows two action pictures of Forest’s 1959 FA Cup win in the Quarter Finals against Bolton. They won the game 2-1 courtesy of a brace of goals by Tom Wilson.

Pages 8 and 9 provide pen profiles for the players at Bolton Wanderers. Goalkeeper Eddie Hopkinson was a former England International and at the time, the club’s longest serving player having been at the club since 1952. Half-back Gareth Williams signed for the club in 1957 from Cardiff City for a reported fee of £50,000. The following two pages show the team line ups with the referee named as Mr N. C. H. Burtenshaw from Great Yarmouth. There are more Bolton pen profiles on page 12 with the same page showing all of Bolton’s league results thus far in the 1967/1968 campaign.

Page 13 provides the standings at the time of writing in the Central League. Nottingham Forest were residing in 9th place in the 22 team division. The same page also advertises some merchandise on offer at the City Ground, ranging from enamel badges to car stickers and rosettes.

Page 14 looks ahead to some forthcoming fixtures for Nottingham Forest. On Saturday 3rd February the club would be travelling to Stamford Bridge for a Division One game against Chelsea. Meanwhile, the next game at the City Ground would take place on 6th February against Aston Villa in the Central League.

Page 16 provides Forest supporters with travel details with regards to the club’s forthcoming game at Chelsea. The following page provides all of the statistics for Nottingham Forest in the 1967/1968 season. The club started their campaign with a 3-1 win at Sheffield United in front of 29,223 spectators. Meanwhile, their first home league game saw them drawing 3-3 against Coventry City in front of a crowd of 44,950.

This entertaining programme is then completed by three pages of adverts. Another review from yours truly this time next week.

In the middle of the deep blue sea: Footy and the...