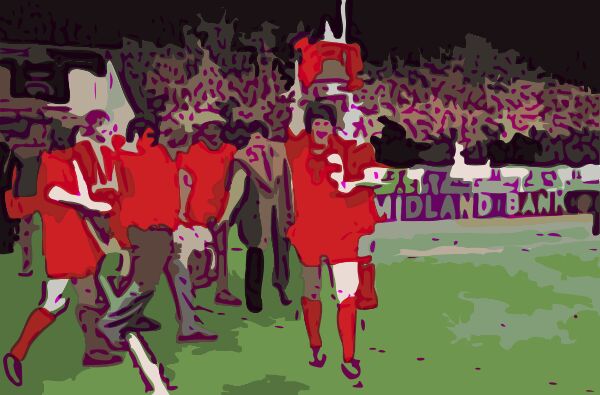 Henderson, it has been claimed in many quarters, is the first Liverpool captain to hoist six different trophies above his sweat-soaked, Liver Bird-shirted head. However, while it is undoubtedly a fantastic achievement, and the lifting of these particular pots and pans is indeed unique as far as any Liverpool captain is concerned, he is actually not the first Redman to lift six different baubles.

That particular accolade goes to none other than the late, great Crazy Horse himself, Emlyn Hughes – Liverpool captain from the onset of the 1973-74 season until his departure from the club in the summer of 1979. Although the composition of Hughes’ haul is slightly different to that of Henderson’s, there are significant similarities. Both men lifted the league title, European Cup (Champions League), FA Cup and European Super Cup, but while Henderson also got his mitts on the World Club Championship and League Cup, Hughes had to make do with the UEFA Cup and Charity Shield.

Some of the aforementioned trophies Hughes won as captain on multiple occasions, but let us have a look at how each trophy was initially won in chronological order.

In the summer of 1973, Hughes entered into negotiations regarding a new contract with manager Bill Shankly. Hughes stated that a condition of him signing a new deal was that he be made team captain in place of the incumbent Tommy Smith. He and Smith had never really gelled off the pitch, although their partnership on it was solid, and despite Smith remaining as club captain, Hughes’ elevation to the on-pitch armband hardly helped matters. The fact that Liverpool were just coming off the double 1973 triumph of the League title and UEFA Cup only exacerbated the situation as far as Smith was concerned.

No matter, as Liverpool under new leadership had a good shot at the League and FA Cup ‘double’ in the 1973-74 season, and although they were to eventually finish six points behind Don Revie’s Leeds United side in the First Division, the FA Cup Final and a date with Newcastle United was reached.

A fairly routine 3-0 Wembley victory ensued, and Hughes had won his first trophy as captain.

The August following the Kevin Keegan-inspired FA Cup victory over Newcastle saw Liverpool return to the hallowed turf and the Twin Towers for the first-ever Wembley Charity Shield. If Keegan had shone in the May cup final, here just three months later he departed the scene in disgrace, sent off alongside Leeds’ captain, Billy Bremner, for fighting. The match itself was a somewhat feisty affair with rash tackles and bad feelings flying in on both sides.

A 1-1 scoreline after 90 minutes took the game into a penalty shoot-out and in shades of Liverpool at Wembley in 2022, the Anfield men held their nerve and prevailed to take the gong with Ian Callaghan netting the decisive kick.

After two successive second-place finishes for Liverpool under Hughes’ captaincy in 1974 and 1975, it was a case of third time lucky as the Anfield men made it over the line in first place in May 1976. A season-long battle with Manchester United and, particularly, Queens Park Rangers, went right down to the wire with Liverpool needing to either win their last game away to Wolverhampton Wanderers or else secure a low-scoring draw.

In his second season in charge, manager Bob Paisley had tinkered with the Liverpool team and refined the squad that Bill Shankly had left behind, and with a late charge, found themselves heading to Molineux for what would be the title decider. Relegation-threatened Wolves needed a win to give themselves any chance of staying in the division, and when they led with 75 minutes gone thanks to a solitary Steve Kimdon goal, it looked as if Hughes might have to wait a little longer to get his hands on the championship trophy.

However, three goals in the final quarter of an hour from Keegan, Toshack and Ray Kennedy did the trick and Liverpool had won their ninth league title.

The Wolves game came sandwiched between the two legs of the 1976 UEFA Cup which Liverpool had reached courtesy of a 2-1 aggregate victory over Barcelona in the semi-finals.

Paired with the Belgian side Bruges in the final with the first leg at Anfield, Liverpool were expected to prevail with little fuss. It, therefore, came a bit of a shock when Bruges raced into a 2-0 lead with just 15 minutes of the first leg gone through goals from Raul Lambert and Julien Cools. Still trailing by two goals as the clock struck the hour mark, Liverpool dragged themselves back into the tie with a three-goal blast within six minutes.

It would not be the last time in Liverpool’s history that a European final was turned on its head in such a manner.

Almost thirty years before a Steven Gerrard-inspired Liverpool side clawed their way back into contention in Istanbul, goals from Ray Kennedy, Jimmy Case and a Kevin Keegan penalty in front of the Kop gave the Reds a narrow 3-2 margin to take to Belgium some three weeks later.

Two goals within the space of five minutes early in the return leg meant the sides cancelled each other out, and the resulting 1-1 draw gave Liverpool the trophy by a 4-3 aggregate scoreline. Emlyn Hughes thus emulated his old foe, Tommy Smith who achieved the feat in 1973, in picking up both the league title and UEFA Cup in the same season as Liverpool captain.

The following season saw Emlyn lead Liverpool back to the European Cup and it was this trophy that would become the fifth different one to be hoisted above accompanied by what one commentator described as, “The biggest smile in football.”

By now an extremely popular player and captain with the Liverpool faithful, even if the same could not be said of his standing within the dressing room, Hughes was at the top of his game. He was seen in many quarters as the face of Liverpool and his beaming smile alongside a comically squeaky voice was enduring to many a neutral. At around this time, he was also doubling up as England captain as Don Revie’s Three Lions attempted to qualify for the 1978 World Cup.

The 1976-77 season saw Liverpool challenge on pretty much all fronts as the league title was retained and the FA Cup Final reached (and lost). It was in Europe where Liverpool really excelled, though, as a memorable 3-2 aggregate victory over crack French side, St. Etienne, in the quarter-finals put the Reds within touching distance of a first European Cup Final.

When FC Zurich of Switzerland were tucked away by a 6-1 aggregate swamping, the stage was set for a trip to Rome and a date with destiny in the shape of the West German side, Borussia Monchengladbach. Bidding to become the first Liverpool captain to get his hands on ‘Ol Big Ears’, Hughes led Liverpool out to a white-hot atmosphere in the Olympic Stadium, home of AS Roma.

Ninety minutes and three goals by Terry McDermott, his old buddy Smith, and Phil Neal from the spot later, and ‘that smile’ was once again seen, this time lighting up the Italian landscape.

The 1977-78 season saw Liverpool retain the trophy at Wembley following victories over old foes Borussia Monchengladbach and Bruges in the semi-final and final respectively, with a certain Kenny Dalglish grabbing the only goal of a dour final.

Dalglish had been an August 1977 signing from Celtic, replacing Kevin Keegan who had left for pastures new in the shape of Hamburg SV, the reigning European Cup Winners’ Cup holders. It was therefore Hamburg and Keegan who Liverpool met in the two-legged European Super Cup in the late autumn of 1977 and a 1-1 draw in West Germany set up the second and decisive game at Anfield a fortnight later.

Keegan ran out at Anfield to a mixed reception from certain sectors of the home crowd, which seemed a bit mean-spirited taking into consideration all he had achieved in his six years at the club, but Liverpool just got on with the task at hand and added another trophy to the cabinet courtesy of a 6-0 drubbing.

It was Hughes’ ninth trophy as Liverpool captain (if Charity Shields are counted) and his eleventh in total as a player at the club. By the time he left Anfield eighteen months or so later, those totals had risen to eleven and thirteen respectively.

The only club trophies Hughes failed to pick up as captain were the European Cup Winners’ Cup – Liverpool were defeated by Ferencváros of Hungary in the 1974-75 version of the competition – the Football League Cup in which Liverpool failed at the final hurdle against Brain Clough’s Nottingham Forest in 1978; and the World Club Championship which Liverpool declined to enter after capturing the 1977 and 1978 European Cups under Hughes’ captaincy.

Upon leaving Liverpool, Hughes joined Wolverhampton Wanderers and, directly installed as captain, promptly won the League Cup and in doing so completed his set of domestic honours.

So, while Jordan Henderson will rightly take the plaudits for his own half-dozen haul of trophies, Emlyn Hughes should similarly be remembered.