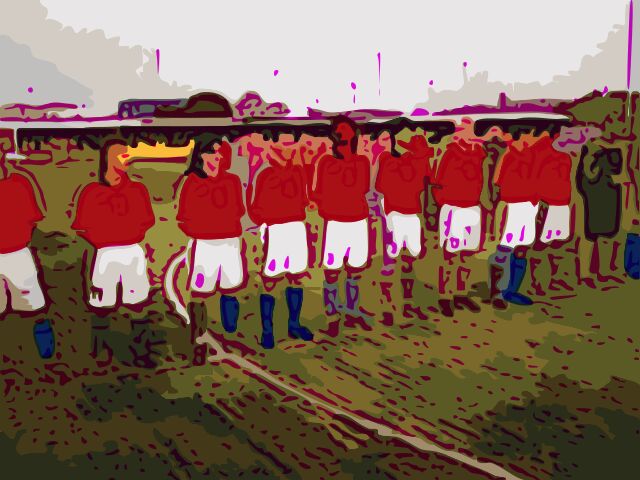 Football is littered with random pre-tournament friendlies. England against Aylesbury ahead of Euro 88 (which really helped England do well), England playing a bunch of Italian hotel workers ahead of Italia 90, Juventus’ annual trip to Villar Perosa, any local side being invited into Marbella to play whichever side is currently residing in the sun and you just know Brian Clough would have put his lot out in a beach kick about versus kids in Spain ahead of both European Cup wins.

And then there is the cultish Czech Republic football team – yes, thems that got to the Euro 96 Final – having a pre-tournament run out against Bamber Bridge.

The Czechs weren’t going into the tournament expected to get as far as a loss to Germany in the final, but they certainly had some iconic players of the day.

Patrick Berger, soon to be of Liverpool fame, was their top scorer through qualifying and had pin-up looks to boot.

Pavel Nedved would go on to become one of the finest players to represent Juventus in Serie A.

Karel Poborsky would score an outrageous goal in the tournament – surely the only reason Sir Alex Ferguson took him to Old Trafford.

And good old Pavel Srnicek was already a hero at St James’ Park in the eyes of the Newcastle faithful.

Bamber Bridge? Well they were non-league minnows, even if they had just won the Unibond League but were unable to move into the GM Vauxhall Conference as their Irongate ground did not meet the safety requirements.

Not that that stopped 2,300 turning out for the hastily arranged fixture with the Czechs.

Russ Rigby, the club’s jack of all trades like so many who make sure English football’s proud non-league scene continues to thrive, was mowing the grass at the Irongate stadium when he received a phone call. The groundsman, club secretary and kitman at Bamber Bridge FC at the time was the point of contact for a hotel owner in Preston.

“It was the hotel’s manager and he just asked if we would be interested in playing the Czech Republic in a warm-up game for the European Championship.”

Somewhat surprised but not foolish, Rigby accepted the offer and let the rest of the details fall into place.

“I confirmed it with our chairman at the time, Dennis Allen, and he said ‘Ring back now and tell him of course we would!’” Rigby recalled to the Set Pieces. “I called the hotel manager to say we’d do it and that’s when it all kicked off: phone calls, faxes, meetings with the Czech Republic FA. It was one of the best times of my life, it just came out of the blue.”

But why Bamber Bridge?

“They were playing Germany in their opening game of Euro ’96 at Old Trafford a few days later, so they were based close by,” added Rigby.

“Preston North End had been approached initially but didn’t want the game for some reason or another, so they passed on my number.”

He travelled to the small Lancashire village to check out what his players would be provided with.

“We’d had the pitch relaid. It wasn’t perfect but it was all right,” said Rigby.

“The Czech manager didn’t speak any English so we had to go through an interpreter, but he was happy with the surface.

“He warned us, though, that he didn’t want a physical game, otherwise he’d take his players off if it got out of hand.”

Understandable, given the Czechs were due to meet the Germans in the group stage in a few days time.

From starting to wind down the activities for a well-earned end-of-season rest, suddenly Rigby’s 15 club roles became more important than ever.

The pitch needed preparing. The club bar needed to be spruced up. Match tickets needed to be printed and sold. Sponsorship needed to be sold to make the most of this golden egg. Interview requests were flying in from all over the place – especially the Czech Republic itself where the match was of huge interest given this was the Czech’s first tournament since breaking up the old Czechoslovakia.

“Sprucing up” the club bar might have been slightly undercooking it – like most non-league clubs of Bamber Bridge’s size, the clubhouse doubled as the bar. This was not going to do for such an occasion so a marquee was settled upon. But where? There was no extra space at Irongate. Rigby settled on the roof.

“The Czech Republic team was sponsored by one of the breweries over there, and they brought their own bar,” Rigby recalled. “So we erected a marquee on top of the clubhouse roof. What a performance it was to get that up there. They had draught beer, bottled beer, their own special glasses. I’ve still got a couple of them at home.”

Unsurprisingly, the match was sold out. Bunting was pinned up as it it was a jubilee and the Czechs rolled into town.

But don’t forget – this was 1996. This was still pre-internet and pre-social media. We didn’t know every single stat of a random Romanian left-back playing in the third tier of Belgium. Even heading into the big tournaments, there was an element of mystery – and the Czechs were not household names yet, certainly not in Lancashire.

“I didn’t know much about the Czech Republic,” Rigby admitted. “I’d never heard of Poborsky, Nedved or Patrik Berger, who later played for Liverpool, but they all went on to be world-famous players with careers all over Europe. Berger was a ladies’ favourite. All the players’ wives and the committee members, they were drooling when they saw him!”

Bridge were used to winning, it was fair to say. Six years previously, they’d been playing their matches on the park pitches of Preston. Promotions followed and that season they’d won the Unibond League, just two divisions from the Football League. It was only ground requirements that stopped them playing in the Conference.

Could they spring a surprise here?

That will have been what the sell-out crowd were wondering as the teams arrived on the pitch to a brass band reception.

No, was the resounding answer.

The game took more of an exhibition feel as every Czech squad member got some minutes, but any hope of a famous upset were gone after a mere five minutes after Poborsky and Nedved put the international side ahead.

Don’t forget – Bamber Bridge had to approach this a little differently to how they’d have played an FA Cup tie against a higher placed opponent. No aggression was to be shown, so they had to try and pass it.

And, they nearly made it 2-1 with a lovely move that led to Srnicek having to make a proper save.

That woke the Czechs up a bit and they made it 3-0. Vladimir Smicer, a future Champions League winner with Liverpool back heeled one home.

Berger came on to the pitch, leaving the home fans swooning. He made it 4-0 as Bridge keeper Stuart Barton was kept busy, earning his eventual man-of-the-match award with many good stops.

If Bamber Bridge were not to kick the Czechs, there must have been a consolation goal agreed somewhere as the home side did get on the scoresheet. Steve Denny got something to tell the grandkids about, netting to make it 4-1.

Just to make it clear there was no comeback available, the Czechs turned it on for ten minutes, scoring another four in quick succession. You know, just in case Germany were watching.

“It was an absolute cracker as well,” said Rigby. “People asked me afterwards, ‘How did you get on?’ It finished 9-1, I told them. And some would say ‘Who to?’”

Just think, had the Czechs gone and won it, Mr Rigby could have rightly said he was part of their triumph.

What a day it must have been.