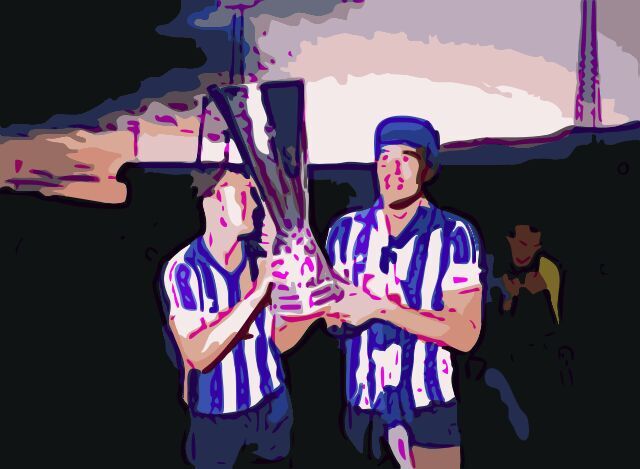 Well, it’s Europa League final week. Rangers have just succumbed to a fervent Frankfurt side on penalties and this Final has me thinking. This term’s grand offering has been between two historic but perhaps vacant clubs in Europe, but after a while away from continental success, they’re back at the top. Two sleeping giants if you will. Now, IFK Goteborg strikes me as a club that similarly fits the mould. 40 years on from their UEFA Cup success – let’s take a look back at a story that includes one of Sweden’s best-ever players, a dramatic two-legged final, and, a certain former England manager.

Build up and the first leg at the Ullevi

Gothenburg, 1982. The city was a hive of activity. IFK were on course to compete for the Allsvenskan title and the Swedish Cup. Their line-up was bolstered by the prolific Torbjorn Nilsson amongst a squad of very capable players. Sven Goran Eriksson was in charge, in what was his second job in his young managerial career.

In Europe, Blåvitt (Blue-white) had battled through a group stage involving Finland’s FC Haka, Austria’s Sturm Graz, and Romania’s Dinamo Bucuresti. The quarter-final opponent was Valencia – fifth-placed in La Liga. They were tough to get past as a 2-2 first leg at the Mestalla showed. Yet, a beating of Los Murcielagos 2-0 in the second leg, was consummated on the home turf. Kaiserslautern came next, and after a tense first-leg draw, were seen off after an extra time 2-1 in the second.

Eriksson’s boys clearly had the legs for this competition. Torbjorn Nilsson had come up with some important goals – as had Stig Fredriksson. Not only adorning a cool name, but the man with four goals was also scoring from left-back. Now, the final hurdle was Hamburger SV.

Runners-up in the European Champion Clubs’ Cup (now Champions League) two years before, Hamburg were looking for redemption. They thrashed Yugoslavian side FK Radnicki Nis 6-3 on aggregate in their semi-final. They had also gone through Utrecht, Bordeaux, Aberdeen, and Neuchatel Xamax.

Few gave Goteborg a chance against West Germany’s champion elect, but in the first leg at the Ullevi stadium, Blåvitt were clever to their visitors’ cavalier approach. In front of just over 42,000 people, Sven’s side soaked up the pressure as much as they did the home atmosphere. Hrubesch was subdued, Magath muffled. In the depths of the Swedish offseason and under the lights of the Ullevi, Goteborg broke through late on.

After a midfield game of head tennis on the boggy pitch, Tord Holmgren found himself played in. The ball bounced up once before settling perfectly for the midfielder. Goalkeeper Uli Stein surged out from between the sticks only for the ball to be slid past him into the bottom left corner. The 87th-minute drama had put one hand on the trophy.

The second leg at the Volksparkstadion

The second leg was quite extraordinary. The Swedish league leaders had the choice of preserving the lead or taking the initiative. Playing a side as dynamic as Hamburg, Eriksson and co. knew they couldn’t risk the hosts getting any momentum. In this final second leg, both sides understood how important the first goal would be.

From the beginning, it was a relatively even battle. Hamburg enjoyed the ball, Goteborg enjoyed time with it as much as without. They were defensively strong when called upon, but the times the hosts did get in, they just couldn’t make the most of it. From a corner on the left, Jimmy Hartwig rose best but his header whizzed past the left upright. Later, Hartwig would head past the other post. It was a real let-off…

Ernst Happel’s men kept the offensive threat alive as the Gothenburg side just kept having to clear, until ultimately a clearance turned into a fast break. A sweeping ball was played to Tommy Holmgren on the left wing, and his cross flew over both defender Bernd Wehmeyer and chasing Dan Corneliusson. The forward tracked the bouncing ball to the back post before blasting high into the roof of the net over Uli Stein to make it 1-0.

After the emphatic goal, usual service resumed, yet the visitors now had a two-goal lead and were confident on the counterattack.

In the second period, Goteborg came out with more ferocity and stunned the favourites with a one-two blow. The first of which came in the 62nd minute as Glenn Stromberg stopped the Hamburg surge from midfield. His block inadvertently found Torbjorn Nilsson. He didn’t need a second invitation seeing gaps at the back and powered through strongly. The forward ran from the halfway line, still no tackle. Goal side of his chasing man – no one could touch him. Into the box! He slots it coolly home into the bottom right corner. Before the ball was even in the net it seemed, the counterattacking Swedes were at it again.

The goal scorer just minutes earlier, Nilsson, was causing havoc on the right wing and when cutting down the by-line, Holger Hieronymus clumsily brought him down. To seal this win, Stig Fredriksson was calm with his penalty and put his kick right down the middle. As fans began to leave, Hamburg looked to have been well and truly beaten. Eriksson’s side played out the rest of this comfortable 4-0 aggregate score-line to cement themselves in European football folklore.

This game immediately sparked great things for the key figures involved. This was, after all, a momentous occasion being the club’s first European honour. Sven Goran Eriksson switched blue and white for the red of Benfica in a big move that kickstarted a wildly interesting career in the dugout. Torbjorn Nilsson solidified his status as one of Sweden’s greats and got a move to Kaiserslautern following his final heroics and solid showings all season.

Goteborg became the first and only Nordic club to win a UEFA competition. Remarkably, this stalwart member of the Swedish big three achieved this same feat in 1987 to really add to an impressive reputation.

To conclude and link back to our earlier mentioned giants – fast forward 40 years and IFK have been away from the top trophies for a while now. In the league, they are bested by most old rivals and sit around the Allsvenskan’s midtable. So, decades down the line, here’s to that two-legged final, the prolific Nilsson and one future England gaffer. And here’s to Goteborg hopefully rekindling some past form.