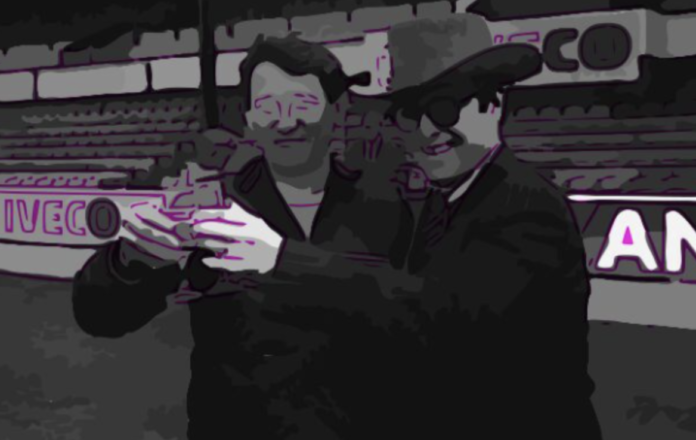 1976 is the year in which the story of Watford’s meteoric rise from Fourth Division obscurity to First Division title challengers began.

It was the year that saw new ownership at Vicarage Road as the club’s Vice-President and lifelong fan Elton John purchased the club. The iconic singer soon found himself with a decision to make having sacked previous manager Mike Keen, who would he appoint? Despite talks with England’s legendary captain and World Cup winner Bobby Moore, Elton John instead snubbed Moore in favour of Graham Taylor – the young, relatively unknown manager of Lincoln City.

What transpired next is one of English football’s most remarkable stories.

In just five seasons, Watford achieved a remarkable climb from the bottom of the footballing pyramid to right at the top, where in 1982/83, their first season in the First Division they took on the might of Liverpool and only narrowly succumbed to second place. Indeed, the fairy-tale ending to Watford’s incredible story never quite came, with Watford also narrowly missing out on an FA Cup triumph in 1984, losing out against Everton in the final.

But how on earth did such an unlikely partnership produce such an epic adventure for all involved at Watford Football Club?

In June 1977, Elton John dismissed Mike Keen, who had taken over as player-manager in 1973, after Watford’s hopes of promotion had faded. He was left looking for a new manager that would fulfil his lofty ambitions for the club.

Bobby Moore was the favourite for the job with the World Cup winner looking to embark on a managerial career. Talks between Elton John and Bobby Moore ensued, and the pair reportedly shook hand on a deal which subsequently never materialised after some of Watford’s directors had raised concerns over Moore’s knowledge of the fourth division.

Elton John decided instead to appoint a young manager who knew and understood the lower divisions of English football and, after asking former England manager Don Revie, found his man.

The chosen man was Graham Taylor: a young manager who had won the Fourth Division with Lincoln City in 1976 and had been strongly linked with taking over First Division West Bromwich Albion. John told Taylor his ambitious dream of Watford playing in Europe and Taylor was persuaded to take over at Vicarage Road. A new partnership was formed – one that would shape the next decade of Watford’s fortunes.

Bobby Moore would go onto have unsuccessful spells in charge of Oxford City and Southend United but was never really given a chance to prove himself as a manager.

The 1977-78 season – Graham Taylor’s first full season in charge – saw Watford achieve promotion to the Third Division at the first attempt as they won the Fourth Division.

There was another new face at Vicarage Road that season as the young duo of Taylor and John were given support by Arsenal’s famous double-winning manager Bertie Mee who joined the Hornets as assistant manager.

While some of John’s more abstract habits, like sitting in the dug-out, frustrated Taylor, the pair were able to create a great rapport with the flamboyant rockstar and driven manager forming an excellent working relationship and friendship.

On the field, Watford had players like Steve Sherwood, Ian Bolton, Ross Jenkins, and Luther Blissett who would all go onto play in the First Division.

John’s decision to appoint Taylor over Moore proved to be the right one with Taylor guiding the Hornets to the top of the league as Watford were promoted as champions.

Watford barely could get accustomed to life in the Third Division before they found themselves in the Second Division.

Just one campaign in the Third Division – in the 1978-79 season – was enough for Taylor’s side to achieve back-to-back promotions and reach the Second Division.

That season also saw Watford put themselves on the footballing map with a shock run to the League Cup semi-final.

Taylor’s Third Division side had already achieved a shock win over Newcastle United before they faced Manchester United at Old Trafford in the previous round and despite trailing 1-0 at half-time, two goals from Luther Blissett saw the Hornets defeat United and claim a famous upset. Watford progressed to the semi-finals of the competition before eventually being defeated by Nottingham Forest.

In the league, everything came down to the last game of the season – a match versus Hull City – and Watford needed a win to secure promotion. A thumping 4-0 win ensued and within the space of two years, Taylor had taken Watford from the Fourth Division to the Second Division; Elton John’s pipe dream was becoming more and more realistic.

After a blistering first two seasons in charge, Taylor was faced with his first real challenge in the Second Division with Watford’s first season after promotion – their 1979-80 campaign – seeing them finish in 18th place.

However, ahead of the 1981-82 season, Taylor would make his best signing yet courtesy of a tip-off from a taxi driver who had spotted a young player playing in a public park. That player turned out to be a certain John Barnes.

With Barnes added to Taylor’s side, Watford were ready to challenge for promotion to the First Division.

A 2-0 win over Wrexham in May was the result that clinched promotion. Watford would be a First Division team for the first time in their history.

The chairman was not present at Vicarage Road on the evening that promotion was secured, he was touring Norway, but he had come off stage early to listen to the commentary before phoning the team to congratulate them. His words to Graham Taylor were: ‘We did it, Graham. We did it.’

Having reached the big time, it would have been easy for Watford’s story to end there, with the Hornets lambasted for their ‘basic’ long ball tactics and many expecting them to go straight back down to the First Division.

Furthermore Taylor had made the somewhat risky decision not to sign any new players in the summer and to keep faith in the team that had won promotion from the Second Division despite the majority of the players lacking First Division experience.

However, Watford, buoyed by the goals of Luther Blissett who finished the season as the division’s top scorer with 27 goals, proved their critics wrong and would have the last laugh as they took the First Division by storm.

Stand-out results included an 8-0 hammering of Sunderland and wins away at Arsenal and Tottenham, with Taylor’s side providing entertaining football throughout the season.

Only English and European footballing giants Liverpool finished above Watford as they finished second and qualified for the UEFA Cup – Elton John’s ambition would be achieved: Watford would be playing European football the following season.

No newly promoted side have finished higher in the top flight since.

Luther Blissett’s individual performances that season saw him earn a £1 million move to AC Milan; less than five years before, he had been playing in the Fourth Division.

The following season saw Watford embark on their European adventure, reaching the third round of the UEFA Cup before being defeated by Sparta Prague.

Due to several injuries and new players failing to gel, Watford’s league form had dipped although over the course of the season they were able to steer themselves away from danger comfortably.

Their 1983/84 season was not about their league form, it was the story of their run to the FA Cup final. Watford had beaten Luton Town, Charlton, Brighton, Birmingham, and Plymouth to reach the final where they faced Howard Kendall’s Everton.

The Hornets were without their captain Wilf Rostron who had picked up a red card three weeks before the final so would be suspended for the match.

Before the match, Elton John was reduced by tears when ‘Abide with Me’ played before the game and unfortunately there would have been more tears from Watford fans after the game as goals from Sharp and Gray for Everton saw Taylor’s Watford experience a bittersweet Wembley occasion as Everton lifted the cup.

It would have been a fitting finish to Watford’s fairy-tale adventure under Taylor and John but sadly it wasn’t to be. It is still quite some story, though, how Watford went all the way from the Fourth Division to Wembley and the FA Cup final.

Taylor left Watford in 1987 to manage Aston Villa after 10 years in charge of the club. John appointed Dave Bassett as Taylor’s successor before sacking him shortly after with Watford being relegated in 1988.

Elton John sold the club in 1990 while Graham Taylor went onto have an unsuccessful spell as the England manager.

However, the story does not finish there as, in 1996, John brought the club again and appointed Taylor again. Even Taylor could not save Watford from relegation to the third division, however, he reassumed his position as manager in 1997 with John hoping they could ‘do it all over again’.

Remarkably, the duo pulled off the same incredible feat of successive promotions again to return to the top flight – now the Premier League – in 1999, 17 years after Taylor had got Watford promoted to the First Division.

Taylor retired in 2001 and a year later John stepped down as chairman for the final time although he has remained the club’s honorary life president ever since.

Graham Taylor dedicated a chapter of his autobiography to his friendship with Elton John, with Taylor sadly passing away in 2017.

I think it’s going to be a long, long time before there is another story as incredible as Taylor and John’s Watford adventure.