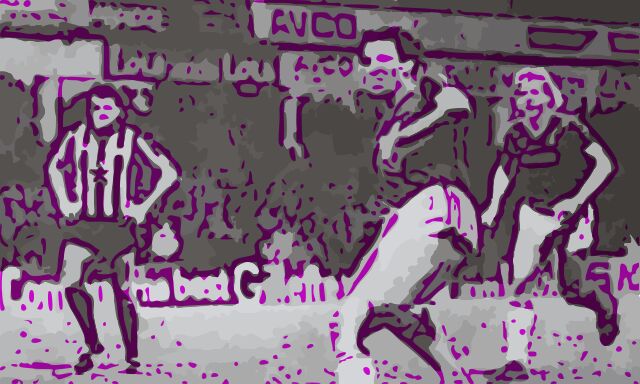 The 1986 vintage of West Ham United was probably as good as it got until David Moyes revived the famous London club in the 2020/21 and 21/22 seasons.

On the 21st April, as they kicked off against a massively understrength Newcastle, the Hammers were still dreaming of the First Division title.

Granted, they kicked off in 5th place – but with games in hand on their rivals they certainly had reason to remain optimistic, especially given that John Lyall’s men had won six of their previous eight.

Beating a fellow First Division side 8-1 was a feat in itself, but the game has gone on to be remembered for the fact that club stalwart and central defender Alvin Martin scored a hat-trick. And, for the only time in top-flight history, each of his three goals came against different goalkeepers.

The West Ham side of the early 80s had a reputation for being a bit too nice, a bit too easy to turn over. Built on the tradition of the ‘Academy of Football’, the emphasis was very much on good play and if that led to losing a match or 20, then at least they were trying to play that way.

But in the summer ahead of the 1985/86 season, West Ham went into the transfer market and signed Frank McAvennie from Celtic and Mark Ward from Oldham.

Alvin Martin, a Scouse central defender who made his Hammers debut all the way back in 1978 was impressed.

“We were always accused of being too nice,’ Martin said. ‘Those signings of McAvennie and Ward made us a little angry.”

West Ham had never (and still haven’t to this day) won the English top flight. In fact, you could probably count on one hand the number of times they have even flirted with the notion of being champions.

The 1985/86 season was severely hit by the weather. Between Boxing Day and March, West Ham had played just four games – hence having so many games in had come the end of April. Their schedule was intense, over the course of 29 days in April they were to play nine matches.

The Newcastle match ended up being one of seven wins in this period, letting the Hammers’ faithful dream that maybe their title drought could come to an end.

Even though it was West Ham with the crazy schedule, it was Newcastle that came into the game suffering from absences.

As the Hammers’ Newcastle-born assistant manager Mick McGiven put it after the match according to the Guardian: “United should forget all about the result – I can hardly remember a team having so much bad luck in one game.”

Ever-present central defender Jeff Clarke was out with a knee injury. Future Hammers boss Glenn Roeder had been down with food poisoning and returned to score an own goal and give away a penalty. Chris Hedworth, one off Newcastle’s youth team production line, made his sixth appearance in midfield rather than his normal defensive position – before, of course, taking the gloves briefly.

John Anderson did start, thought wouldn’t even get near a fitness test in the modern game given his Achilles injury. He was named at the back but ended up being a warm body on the right wing, unable to move as the injury flared up.

And then there was the goalkeeping situation which led to Martin’s treble being entered into the history books.

First-choice keeper Martin Thomas did start at Upton Park, but in normal circumstances would have had his feet up in Newcastle. Thomas had injured his shoulder in March and missed seven matches for the Magpies, before coming back and injuring it again. His understudy, Gavin Kelly, was on the long-term absence list with a knee injury, meaning Newcastle moved to take Hibernian keeper David McKellar on loan – he arrived having not played in nine months and promptly picked up a hip injury in the preceding game, a 1-1 draw with Chelsea.

“Really there was no way I should have been playing but it was a case of having to because Dave found that the hip injury he had picked up at Chelsea had spread to his groin,” Thomas said to the Guardian in 2020. “He could hardly walk.”

Thomas’ patched up start worked well for all of two minutes – landing awkwardly and tearing all the muscles in his shoulder once again. He tried to play through the pain – pain that must have increased after a Martin volley gave West Ham the lead within five minutes.

That lead was soon doubled, Ray Stewart shooting from distance and the ball going through the injured Newcastle number one – a trick repeated by Orr before Roeder backheeled the ball into his own net.

At 4-0 down at half-time, Thomas sensed that he might as well call it a day.

Peter Beardsley, who would go on to become Gary Lineker’s main provider of goals in Bobby Robson’s England team, fancied himself as a bit of a shot-stopper, based on mucking about in goal during training sessions.

The idea was immediately rejected by Willie McFaul, the man in charge of Newcastle. Despite being 4-0 down against a rampant West Ham, McFaul was of the belief that the game wasn’t over.

“I was not prepared to throw in the towel,” he said. “I wanted him (Beardsley) to stay where he was because there was always a chance that he could have pulled a goal back for us.”

One suspects there is a reason McFaul didn’t go on to become a managerial legend.

Hedworth, already crowbarred into one position, was asked to take over. Having picked up a knock and admitting he’d played in goal as a schoolboy, plus a mere 21 years old hoping to get into the manager’s favour, he was stuck between the proverbial rock and a hard place and agreed.

Ten minutes into the second half, Hedworth fractured his collarbone in a collision with notorious hardman, er, Tony Cottee. But, to his credit, he didn’t just throw in the goalkeeping towel – Hedworth believed that he could still do a job in goal despite his lack of experience and a faulty collarbone restricting the movement of one arm.

Martin’s second in the 64th minute soon made Hedworth reevaluate, and he moved to the left-wing – the right-hand side already occupied by someone unable to move.

“It took guts to do what he did,” said McFaul. “How he carried on does not bear thinking about.”

McFaul must have not valued bravery massively highly, as Hedworth was released on a free three weeks later – hobbling around Upton Park was his final act as a Newcastle player.

Beardsley finally got his wish – and at 5-0 down, who can blame him for wanting to be where the action was. With their creator-in-chief in the other box, Billy Whitehurst pulled one back for the Magpies.

Newcastle briefly held out – until the 81st minute at least when the Hammers notched up number six and then two minutes later Roeder’s night got worse, handballing and giving away a spot-kick.

Martin, obviously, wanted it – despite Ray Stewart still being on the pitch, someone who never, ever missed one.

Beardsley did his best to look big, but Martin sent him the wrong way for the hat-trick.

“I got a rollicking from [the manager] John Lyall when we got back into the dressing-room,” Martin told the Guardian. “I’d never taken a penalty before. In fact, it was the only one I ever took in my career … I have to say, Peter did not fill me with fear as he stood there. I stared at the bottom left corner and stared again. He thought I was bluffing but that’s where I put it. He dived the wrong way.”

The Hammers fans finished the game serenading Beardsley, calling him ‘England’s number one’.

West Ham, as we know, didn’t go on to win the title – Liverpool, under Kenny Dalglish, clinched it at Stamford Bridge before going on to win the FA Cup as well.

“We didn’t throw it away,’ Martin said, ‘we were just behind a brilliant Liverpool team.”

Martin will be remembered as an elegant, ball-playing centre half, and only an occasional goalscorer. But he had played up front for Netherton Boys in his native Liverpool as a youth, so scoring a hat-trick in a title charge for West Ham was not completely out of the blue (other than it took seven and a bit years to happen).

“John McBride, who ran Netherton Boys, got me the trial at West Ham,’ said Martin to the Daily Mail. ‘Ron Greenwood, the then manager, did actually try me out as a striker in a trial game to see what I was like. He had turned Geoff Hurst into a centre forward and that turned out all right, didn’t it? Bobby Moore was watching. He said I was a centre half.”

Who knows what might have happened to Alvin Martin if Moore had said something else. He did OK, though – 469 appearances for the Hammers and 17 caps for England. Plus, of course, cult status at Upton Park.