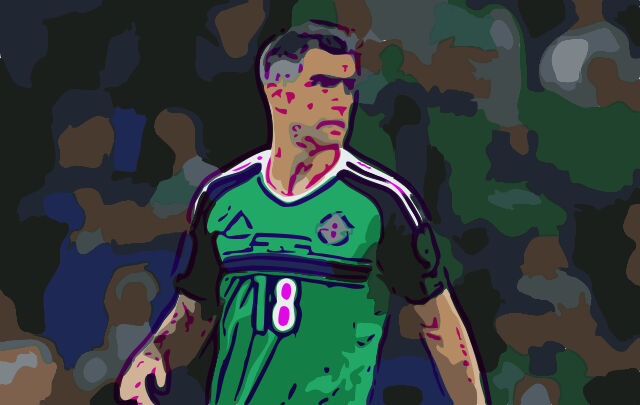 This article originally featured on Tale of Two Halves back in May 2018 by Rowan Shaw-Nicholl.

Longevity in football is as impressive as it is infrequent; a continuous war of attrition against the common adversaries of age, injury and diminishing ability.

Aaron Hughes’ international accomplishments with Northern Ireland is a testament to this, often flying under the radar amongst the wider footballing world.

In Cookstown, County Tyrone, a large billboard featuring a collage of Hughes’ finest international moments could be seen on the main road into the rural town prior to the European Championships of 2016; a tribute to the long serving international who would line up that summer at the fresh age of 36.

In Northern Ireland, he is a national hero who will go down in history accordingly when he finally calls it a day. However, that day shows no sign of arriving any time soon.

Hughes’ club career is most commonly reminiscent from his time at Newcastle United and Fulham. Debuting as a substitute in a Champions League tie against Barcelona at the Nou Camp, Hughes’ career has been a lengthy one for both club and country.

With Fulham, he would feature in Roy Hodgson’s team that lost in the final of the 2010 Europa League to a Sergio Aguero and Diego Forlan infused Atletico Madrid side.

After dropping to the Championship for a handful of seasons, Hughes embarked on a continent-conquering escapade that would see him play in Australia and India for Melbourne City and Kerala Blasters respectively. Currently, Hughes resides in Edinburgh where he plays for Hearts of Midlothian.

Although boasting of a diverse club portfolio, Hughes’ 110 and counting international caps for Northern Ireland suggest a more settled history when it comes to international football.

In 1998, the year that Northern Ireland’s thirty years of bloodshed was brought to an official ending through the signing of the Good Friday Agreement, Aaron Hughes would make his first international appearance in a 1-0 win at home to Slovakia.

Twenty years later and Hughes is still an active player, albeit in a more squad oriented role. His service is as long as Northern Ireland’s peace process; an indication of the imprint Hughes has had on Northern Irish football.

In 2006, Hughes was at the heart of a defence that kept out the likes of David Beckham, Wayne Rooney and Michael Owen when Northern Ireland won 1-0 on an iconic night in Belfast. It was the first time Northern Ireland had defeated England since 1972.

That game lives on in infamy, with the score line taking pride of place amongst a number of murals in Belfast today.

Further success came in 2008 when the ‘Green and White Army’ dispatched of the European champions-to-be, Spain, 3-2 in a qualifier in Belfast – assisted by a David Healy hat trick. For Hughes, who captained his country for the first time in a 5-0 defeat to Spain in 2002, this was a particularly sweet victory.

Hughes’ only international goal would come against the Faroe Islands in a 4-0 win in August of 2011, 13 and a half years after his debut in the previous century.

Later in the same year, he announced his retirement from international football; a fitting time to bow out. However, incoming manager Michael O’Neil had other plans and would convince the experienced central defender to remain an option to be called upon. As ever, Hughes answered the call.

He would win his 100th cap against the same team he made his debut against all those years ago – Slovakia. The 0-0 result would mark a 12-match unbeaten streak ahead of the European Championships and the best record amongst the 24 teams that would compete in France that summer. Although adopting a more intermittent role within the squad, Hughes’ leadership and aura of calmness was invaluable to that record.

Five years after his provisional retirement, O’Neil had led Northern Ireland to the European Championships, with Hughes still in the squad. This would be his only participation in an international tournament, a wait of 18 years. He would make his first appearance against Ukraine in a 2-0 win, astutely marking the quick and skilful Yevhen Konoplyanka. Hughes would go on to feature in three of Northern Ireland’s four games that summer.

This summer’s upcoming World Cup in Russia will not feature Northern Ireland, despite a heroic qualifying effort that fell short at the final hurdle. However, it would not be outrageous to suggest that Aaron Hughes will once again pull on the green and white strip next year when European qualifiers commence ahead of Euro 2020.

Although not blessed with the same fame or technical prowess, Hughes is just one-year shy of pulling level with his former Fulham teammate Jari Litmanen (even though Litmanen would never make an appearance for the London club), an icon in Finland and the wider footballing world for his 21 years of international service between 1989 and 2010.

International careers are often short-lived and undervalued when placed against the financial draw of club football. A player that can sustain a long career within an international setup is a rare and dying feat, with the 100 cap milestone acting as the widely accepted beacon of recognition for an exceptional international career.

However, 20 years of service eclipses this benchmark, and in Aaron Hughes’ case this legacy is apparent. He is Northern Ireland’s most capped outfield player and has helped shape the country’s modern era of football. A consistency that defines the national team.

From the dark ages of the early 2000s where a consolation goal was celebrated as progress at Windsor Park, Aaron Hughes has allowed a nation to ‘dare to dream’ whilst leading his country into its more fruitful years of recent.