Bethany Balcer’s 2019 rookie campaign was out of the ordinary to say the least. The 23-year-old from Hudsonville, Michigan was recently crowned as Seattle Reign’s first-ever NWSL’s rookie of the year. Perhaps even more out of the ordinary is Balcer’s journey to NWSL soccer, which consisted of playing at NAIA powerhouse Spring Arbor University. Balcer was crowned the NAIA player of the year three times during her collegiate career while adding two national championships to her decorated resume at Spring Arbor. The Seattle Reign acquired Balcer after impressing scouts, while playing for the Seattle Sounders 2018 WPSL championship-winning side.

Vlatko Andonovski quickly realized that Balcer had potential, and signed her one day before the Reign’s opening NWSL regular season match. Balcer would go on to lead the Reign with 5 goals and 2 assists in the 2019 NWSL season while playing multiple roles in Vlatko’s tactics. In this scout report, we will analyse how Bethany Balcer’s playing style expands the Seattle Reigns attacking potential. A tactical analysis portion of this piece will review the holistic traits that make Balcer so effective.

Bethany Balcer has been utilised in a wide variety of attacking positions for the Reign due to her high tactical understanding of the game.  Balcer possesses the unique ability to understand when the correct opportunity is present to either drop deep to receive the ball, or stay high to provide an attacking outlet. This high level of tactical comprehension is due to her relationship with teammates in the Reign’s 1-4-2-3-1 system.

Balcer’s positioning is dependent on Seattle’s selection of available players, and the tactical components of the opposition. Seattle has a wide array of attacking talent consisting of Megan Rapinoe, Beverly Yanez, Jodie Taylor, and Jessica Fishlock, who all have the tactical flexibility to play anywhere in the attack. Balcer’s flexibility to play forward, attacking midfielder, and winger, is vital to how Seattle Reign’s fluid attack operates.

This provides evidence that despite finishing below the Chicago Red Stars and the Portland Thorns, the Seattle Reign was very proficient when playing a 1-4-2-3-1 formation against other 1-4-2-3-1’s head to head. This proficiency is largely due to Bethany Balcer’s ability to exploit space within the tactical confines of the formation.

Attacking prowess in the build-up

Balcer’s influence in Seattle Reign’s attack rests heavily on her ability to operate within the half-spaces of opponents. Her positional relationships with Jodi Taylor, Jessica Fishlock, Ifeoma Onumonu, and Beverly Yanez, are particularly important due to the interchanging roles which are required in the Seattle Reign’s tactical demands. The general principles of Seattle’s attack consist of pressing to win the ball as high as possible, retaining possession through the use of backs, and finding the interchanging forwards in space. The passing range of Barnes and Oyster provides Seattle with the flexibility to commit numbers forward into attack. By committing more numbers forward, Seattle can then begin to create overloads and interchanges within their fluid 1-4-2-3-1 formation.  This is where Balcer is particularly dangerous.

Balcer typically positions herself as high as possible, hanging off the shoulder of the deepest centre back. By positioning herself off the shoulder of the centre back, she can dictate whether to run in behind or check into space in front of the opponent’s backline. This movement is an integral part of Seattle’s attack and incorporates the interchange of Fishlock, Taylor, and Onumonu, to move into advanced positions.

If the opposition chooses to let Balcer check into the half-space under no pressure, then she can turn and create danger by running at the backline. If the centre back makes the decision to follow, this cues the interchange of Seattle’s midfield to advance forward. Balcer’s movement into the half-space pulls out the right centre-back, exposing a hole in the backline. This cues Fishlock to advance forward from midfield into the space in behind as well as Onumonu. Balcer can then utilize the midfield by playing the way she faces, and create a chance for players to run into. The following centre back creates space in behind for Seattle to run into.

While being primarily utilised as a central striker, Bethany Balcer also has the ability to play on the wing. Her wide positioning is centred on the movement of Seattle’s centre-forwards, which range from running into the channel and checking into space in front of the backline. Balcer’s uncanny ability to anticipate the movement of her teammates is what makes her particularly effective in wider positions as well.

Balcer’s movement inside also triggers the “weak sided” wide players to run in behind and the midfielders to join the attack. This is where the combination of Fishlock, Yanez, and Onumanu is particularly dangerous.

Seattle Reign’s use of Bethany Balcer in the half-spaces is key to how they attack. Her outside-in movement and ability to drop into space is has been particularly effective in Seattle’s build-up tactics. These spaces are especially open when playing against other 4-2-3-1 formations, which the majority of teams in the NWSL play.

This section of Balcer’s tactical analysis will focus on her ability to score and create goals for Seattle. The 23-year-old attacker produced an average xG of 0.27 showing a great ability to create danger for the Seattle Reign, which ranks second on the team.

Leading Seattle with five goals and two assists on the year, Bethany Balcer was particularly effective in the final third. Balcer’s ability to operate in the half-spaces of the attacking third and her quick decision-making skills created numerous opportunities for her.  Balcer not only led Seattle in goals but also in shots, with over 62 opportunities taken placing her at 5th most in the NWSL. Balcer also follows up this impressive stat by making the second-most appearances in the NWSL with 25 total.

This indicates that Balcer is primarily the main attacking threat in Seattle Reign’s front line. Balcer is not the kind of attacking player you will typically see taking on multiple defenders with the dribble before finishing in on goal. Instead, Balcer often positions herself in dangerous goalscoring positions through intelligent off-ball movement and anticipation. Similar to how Balcer operates in Seattle’s build-up play, she prefers to drift into half-spaces in order to exploit the opposition’s defence.

Balcer’s impeccable timing and awareness have made her abilities particularly dangerous inside the box, where she has scored all five of her goals from. this “fox in the box” quality is the result of Balcer’s relationship with the opponents positioning, her teammates, and her gut instinct of where the ball may be. The ability to manipulate half-spaces, create overloads, and make late runs into the box, all encompass to her scoring prowess.

Complimenting her footballing IQ is her impressive ability in the air. A staggering 6.41 (53%) aerial challenges were won by Balcer in the 2019 NWSL season, placing her at 9th overall in the league and 1st amongst all strikers in aerial win percentage.

This superior ability can be seen in an analysis of the goal she scored against 1st placed North Carolina Courage.  Balcer initially flicks on a floated ball into the box which is headed out by North Carolina, but the ball falls Kindly to McNabb for a re-service into the box. Knowing the ball will be whipped in as an out-swinging cross with McNabb’s left foot, Balcer first analyzes surroundings. While checking her position, she realizes that she is unmarked and can create an overload on the back-post. She then holds her position in the box while her teammates rush in to force North Carolina to drop onto the edge of the 6-yard line. As the ball is crossed into the area, Balcer moves towards the out-swinging ball and redirects it off the crossbar and in for a 1-0 lead.

In this scenario, Bethany Balcer dictated her own position in the box rather than the defenders because she was able to forecast the trajectory of her teammates cross. Countless opportunities like this are squandered because players fail to be patient when timing runs into the box. This is where Balcer shines and can win the majority of aerial duels despite being 5’9.

Defensively, Anonovski often wants the Reign to press when the opposition is looking to play from the back. Bethany Balcer’s positioning is particularly crucial as she normally operates as the first defender in the press, dictating where the opposition can pass. When playing centre-forward in the 1-4-2-3-1, it is vital that she presses to make the opposition predictable from the back. Balcer does this by cutting the centre-backs off from one another, forcing them to play wide. This helps Seattle press as a unit and often “cues” the wingers and midfielders to move high into the wide channels, forcing the opposition to play long or cough up the ball. Balcer is a key component of Seattle’s pressing tactics, commonly being the first player to limit the opposition space.

When playing in a withdrawn role or out wide, Balcer’s duties remain fairly similar. In the images below, Balcer is shown tracking Denise O’Sullivan in the middle of the park as an attacking midfielder. Seattle was able to be fairly successful in the first and second half of their match against the North Carolina Courage, by denying passing lanes into O’Sullivan who typically switches the point of attack. Balcer’s attacking midfield position focused on marking O’Sullivan and cutting off her passing lanes. This helped Seattle remain compact and North Carolina’s attack more predictable.

Bethany Balcer is a versatile centre-forward that is especially dangerous off the ball. Her movement has created multiple chances for the Seattle Reign this season, and will only improve with further experience in the NWSL. Her shot selection, ability to exploit space, and defensive work rate, are all tangible qualities that have the potential to make her a real threat in the near future. This tactical analysis reviewed many positives of Balcer’s attacking play, but she does show room for improvement in her ability to be more clinical in front of goal (40.3% SOG average).

Andonovski’s choice to gamble on a relatively unknown NAIA player certainly paid off in spades and may result in the development of a real star. Bethany Balcer’s potential to be a real world-beater is not out of the question if she continues to improve her work-rate and understanding of tactics on both sides of the ball. 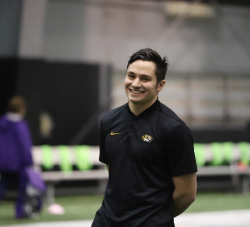