Full-back James Justin was a key part of Luton Town’s set-up as they secured back-to-back promotions from League Two up into the Championship. The 21-year-old was equally as important offensively as he was defensively, and his stellar displays attracted interest from Stoke City, Aston Villa and Leicester City amongst others – however it is the Foxes who look to have stolen a march on their Midlands rivals as they appear to be in the driving seat to secure Justin’s signature for a fee of around £10 million.

In this tactical analysis, we will analyse Justin using both match analysis and statistics to identify how he has become such a highly-rated young star.

In Justin’s heatmap from the season 2018/19 (below), it is clear to see how he spent as much time attacking as he did defending. This was due to Luton’s 4-diamond-2 formation, in which Justin and fellow full-back Jack Stacey were vital in the Hatters’ attacking armoury through their ability to provide genuine width and thus open up space for their teammates positioned centrally.

As he operated at both right- and left-back (albeit primarily the latter) he was an indispensable asset to his side through his adaptability to perform to an outstanding level in both positions, allowing them to continually adopt their precisely honed system. 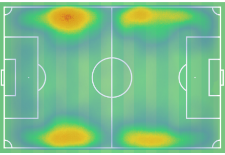 The gap between the defensive hot zones and attacking hot zones are due to his tendency to, having initially gained the ball in his traditional position, then instantly took up an offensive position to provide an option to be passed to. Instead of carrying the ball all the way up the pitch, he would look to give the ball to one of the near midfielders before then regaining possession in the latterly-accommodated higher position.

The most striking aspect of Justin’s game is his penchant for attacking. Throughout the season he averaged 1.31 shot assists per game, highlighting his ability to supply his team’s forward line with high-quality chances. His blistering pace and power made him a huge threat to opposing defences with frequent driving darts up the pitch.

Furthermore, his offensive dribbling proficiency gave him an outcome of 68.7% attacking dribbling success, again indicating his outstanding capabilities for providing a huge attacking threat. In addition, he completed on average 1.72 progressive runs and suffered 1.67 fouls per game, denoting his superb capability to produce penetrative, aggressive surges in the final third. His additional goal-related statistics throughout the season also back this up: he managed nine assists and three goals in all competitions.

His one-on-one capacities are evidenced in the below image, where he received the ball when penned tight to the touchline yet still managed to beat his man, reach the byline and deliver in a cross. As Luton play with the diamond formation, their reliance on Justin and Stacey to provide passing options out wide were crucial to their team’s overall success. 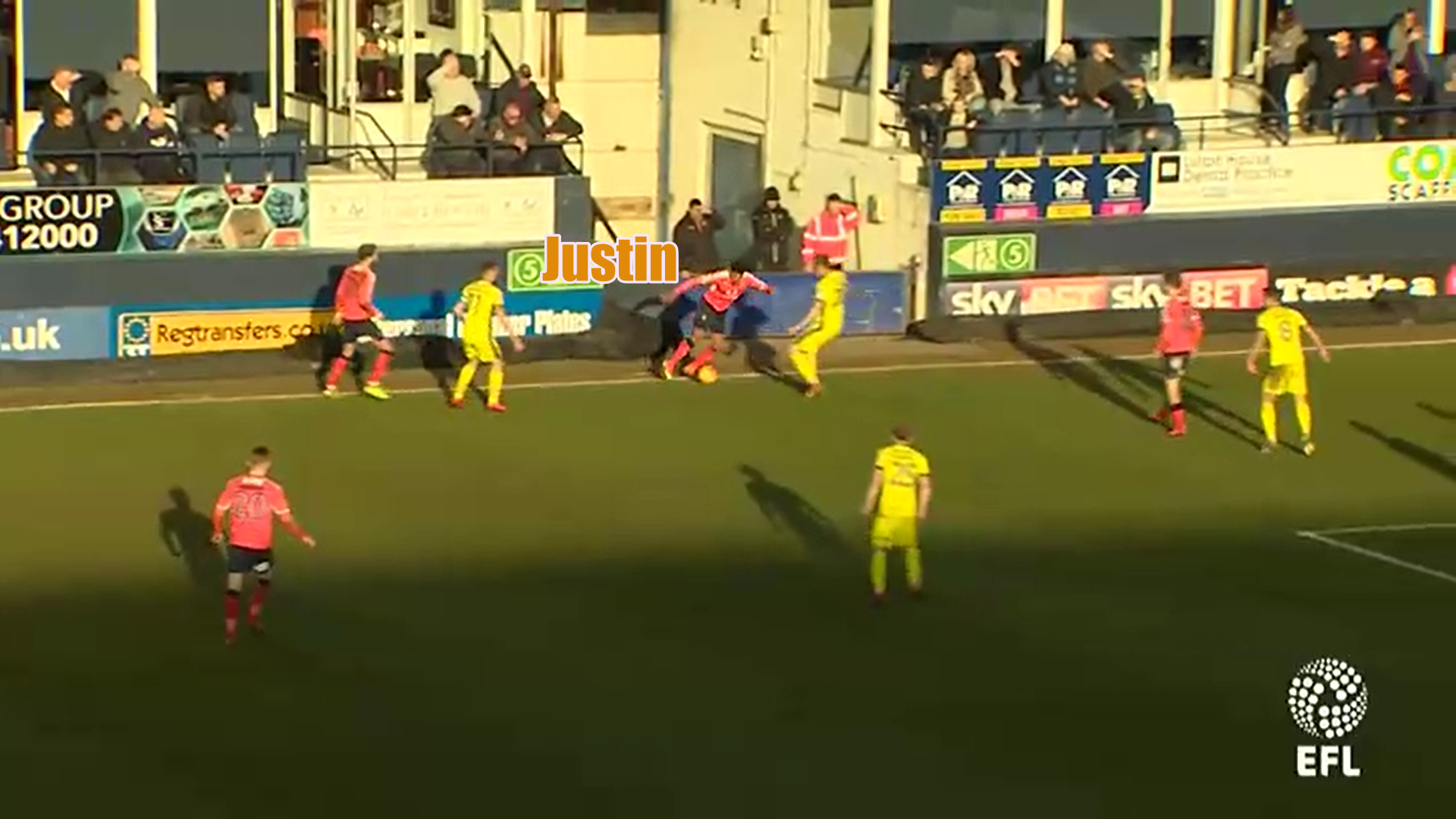 In addition to his individual propensity, Justin’s relationship with the wide midfielder playing in front of him was crucial to the overall success of the side. The understanding between the two – when to come inside, when to stay out wide and knowing where the other was going to move into – was vital in their overall fluidity and output. As can be seen below, Justin and, in this instance Pelly Ruddock Mpanzu, instinctively adjust their positioning in order to suit the other. Both are comfortable either moving inside or conversely beating their man on the outside, and as a result, this versatility allowed Luton to combine smart positional rotation with swift, slick passing centrally. 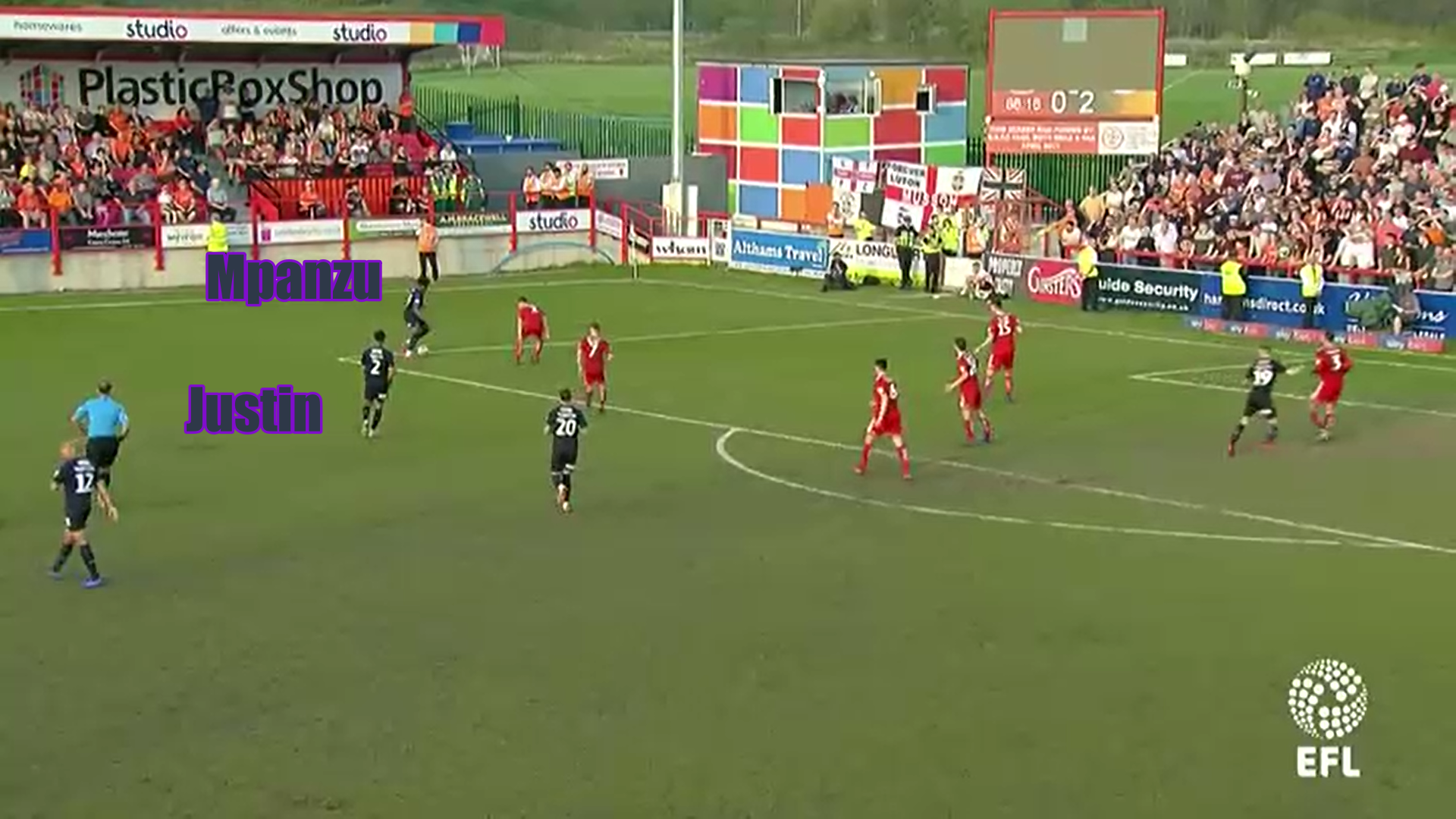 Despite offering such a huge attacking threat, the dynamic England under-20 international is also an excellent defender. Using the express speed he puts to good effect at the top end of the pitch, he is able to snuff out any potential danger posed by either the winger directly opposing him or the central strikers when covering.

As illustrated in the following image, in this instance Justin is able to ensure that the striker is not able to latch onto the lobbed ball over the top of his central defensive colleagues due to his smart work on the cover. He puts his pace to good effect as he comes around to marshal the advancing forward and prevent him from getting a shot away. 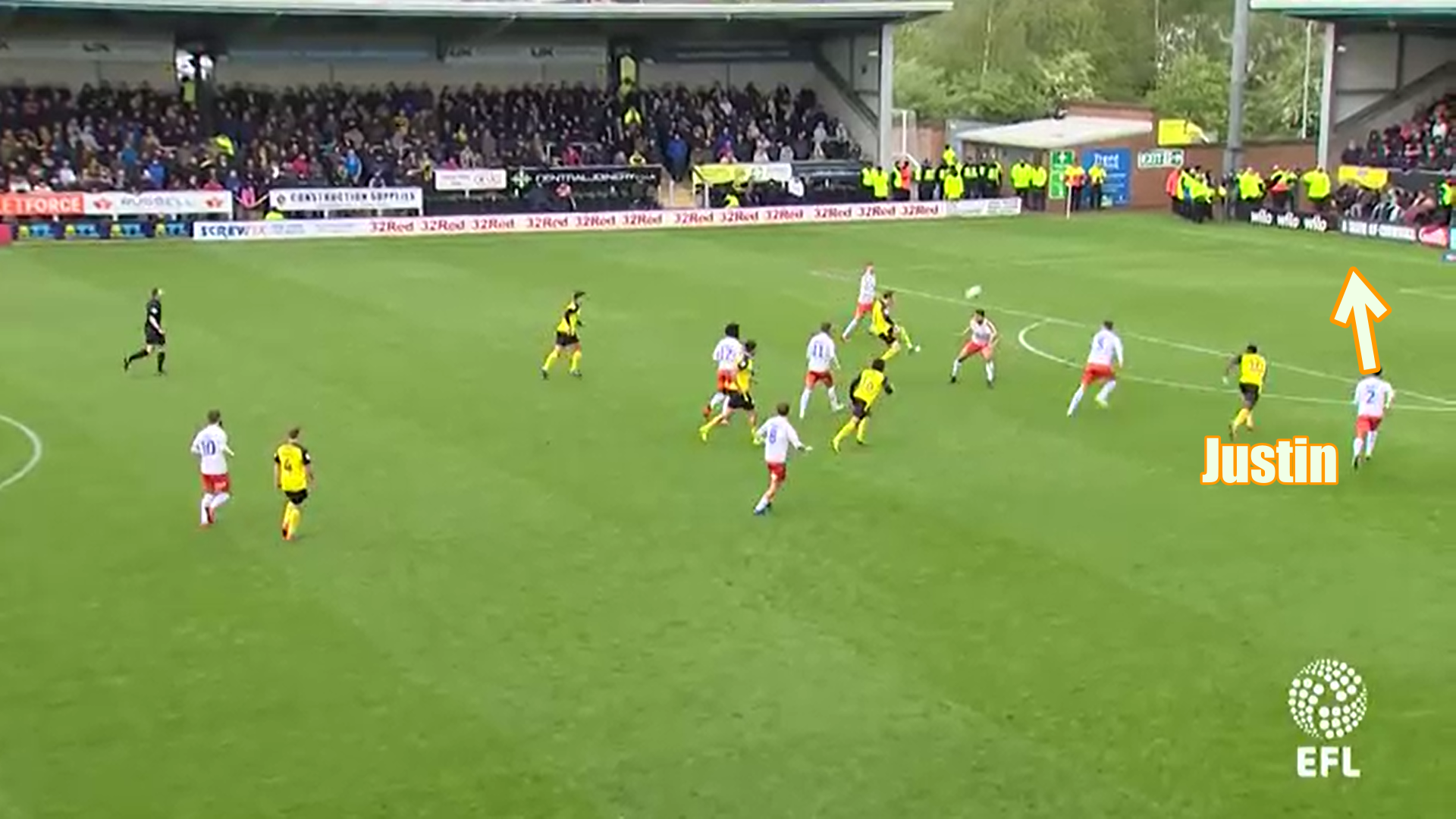 Additionally, his one-on-one aptness offensively is also extremely useful defensively. Not only does it allow him to know what his opponent is likely to do and thus counteract it, but also use his speed to reduce the chance of them beating him and therefore gaining a chance to cross. In support of this, Luton’s structure gives Justin the support of a man inside to allow him to concentrate on showing the winger down the outside, as is highlighted by the purple box in the image below. As such, this plays to his strengths (his pace) as it forces the winger into a foot race with him – a task he is likely to win. 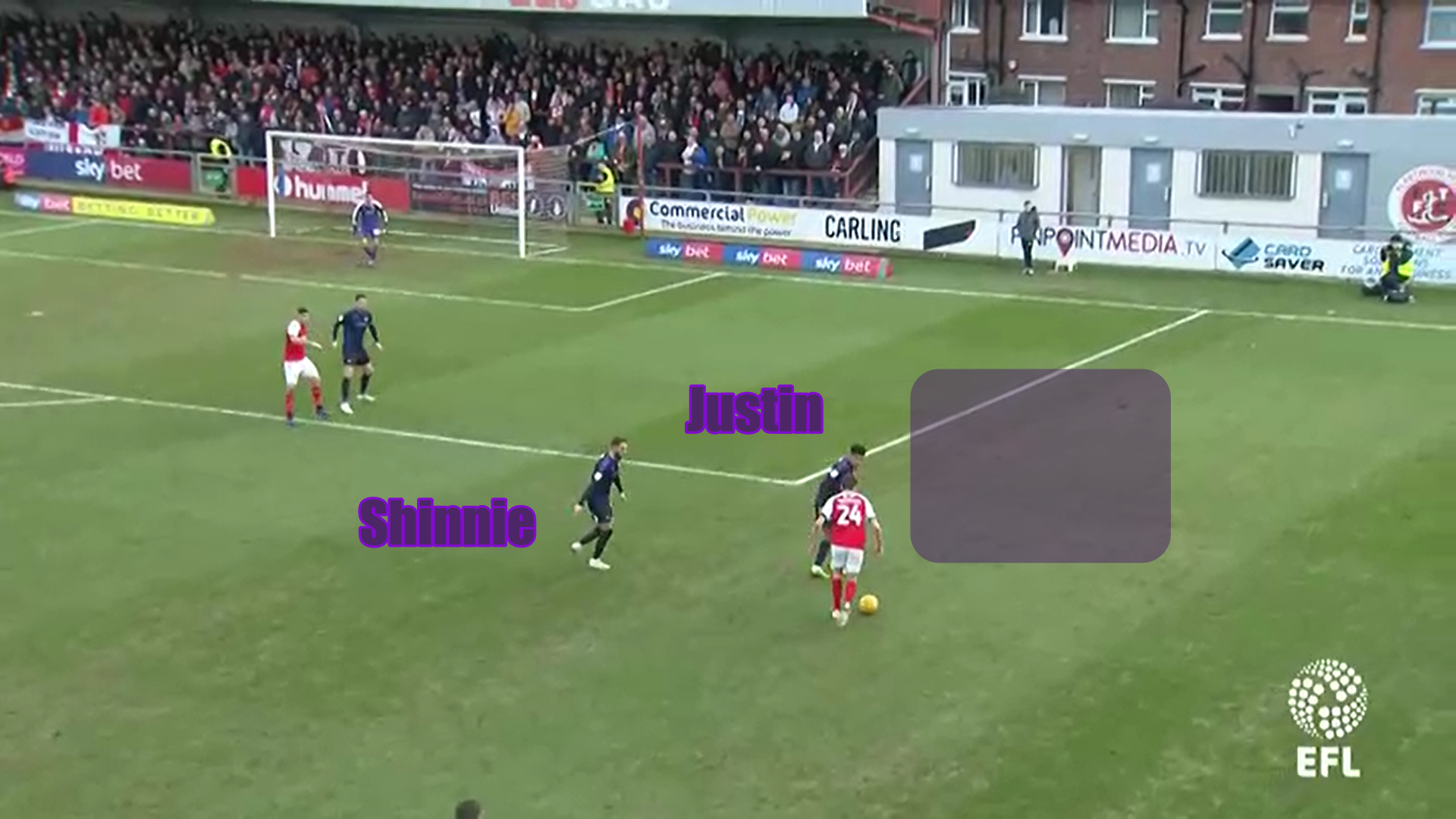 His average fouls conceded per game of 0.38 is exceptional for a player who is consistently presented with one-on-one situations and highlights his considerable defensive capabilities. He also performs, on average, 5.27 interceptions per match, indicating his great aptitude at reading the game, adjusting to the situation and capitalising on errors in order to regain possession.

It is plainly obvious why Justin is attracting attention from larger clubs off the back of last year’s performances. He is equally dangerous going forward as he is defensively solid, and has all the qualities – pace, power and intelligence – to not just survive but thrive at a larger club in the higher echelons of the footballing world. It will be fascinating to see how he adapts to life in the top tier.

Jack Groom
Sports writer and analyst from England with a deep love for the EFL. 19.