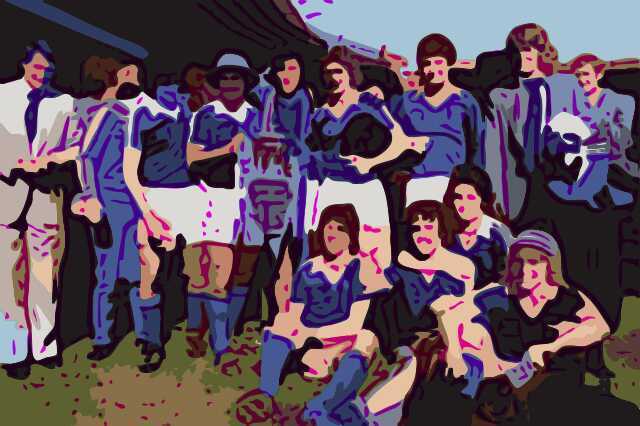 Some time ago we ran a series based on the 1980s. It was a look at the (mostly) domestic football happenings and events of each of the years from a calendar viewpoint rather than a season one. We ran the series in random, non-chronological order and while we mainly stuck to events in the public domain, we did include a few personal tidbits with an emphasis on how events affected us personally.

Now, we feel it is time for a follow-up and so we are initiating a look back on the years of the 1970s. Although the basic concept will be the same as our earlier series, there will be some slight differences – namely because the 1970s were such a long time ago (even for us) that personal memories are in reasonably short supply.

Right, that’s got the introduction out of the way, so where should we start?

Let’s go with 1978, shall we? The New Year started with Brian Clough’s Nottingham Forest side, newly promoted from the Second Division, sitting pretty atop the First Division, five points clear of the chasing pack which included Arsenal, Liverpool, their Merseyside rivals, Everton, and Manchester City. Manchester United had been expected to challenge, but after dispensing with the services of manager, Tommy Docherty, the previous summer due to a nocturnal habit that involved the wife of a club employee, the Red Devils, under new manager, Dave Sexton, had failed to mount any sort of challenge and lay in 13th place at the turn of the year.

Despite being at the helm of a table-topping side, and into the quarter-finals of the Football League Cup to boot, Clough was not exactly on Cloud Nine, having learnt just the previous month that he had been unsuccessful in his application to become England manager in succession to his detested rival, Don Revie.

Rather than take a gamble on the outspoken and irascible Clough, FA had instead rubber-stamped the appointment of Caretaker Manager, Ron Greenwood, who had been filling in since the season’s start. Clough would never get his chance to manage England and he would never forgive the slight from the FA.

James Callaghan sat in the pristine offices of Number 10 Downing Street as the head of a Labour government struggling to keep unemployment down and inflation at bay. Giving him daggers at Prime Minister’s Question Time from across the aisle, and biding time like the most deadly of predators, was the first-ever female leader of a major British political party, in the form of Margaret Thatcher.

Topping the charts as the Christmas lights burned brightly into 1978 was Paul McCartney and his mates in Wings with his/their charming little ditty extolling the virtues of a rather obscure and windswept Scottish outpost known as Mull of Kintyre. It would sell more than a million copies and go on to become the biggest-selling single of all time for many years with its almost hypnotic musical arrangement. (Admit it, you’ve already started humming it, haven’t you?)

Once Cloughie had cleared his head a bit, the football began again and with no World Cup to look forward to for England fans, attention was soon on the FA Cup. A 4-1 home victory over Swindon Town set Nottingham Forest on their journey for an unlikely treble, while second-placed Everton managed an identical scoreline at home against Aston Villa.

An all-non-league tie between Blyth Spartans and Enfield Town ended in a single-goal victory for the home side, but the major shock of the day came at Stamford Bridge, where a struggling Chelsea side came up against reigning League Champions and European Cup holders, Liverpool. Defying all the odds and the formbook, it was the home side that prevailed by the unlikely scoreline of four goals to two.

By the end of January, both Nottingham Forest and Liverpool had successfully negotiated passages to the last four of the League Cup, where they were joined by Leeds United and Arsenal, respectively. Forest had also defeated Manchester City in the Fourth Round of the FA Cup, while Arsenal had overcome Wolverhampton Wanderers, Everton had fallen to Middlesbrough, Ipswich had swiped aside Hartlepool United, and the last remaining non-league side, Blyth Spartans, had recorded a famous 3-2 away win over Second Division Stoke City.

On the international front, only Scotland of the four Home Nations had the upcoming World Cup in Argentina to look forward to, finishing at the top of a group that included both Wales and Czechoslovakia. England had failed to qualify on goal difference from a group containing Finland, Luxembourg and Italy, while Northern Ireland had finished third in their group behind both Holland and Belgium.

The £500,000 transfer barrier was broken for the first time between two English clubs when Gordon McQueen was transferred to Manchester United from Leeds United in early February 1978, and shortly afterwards his former Leeds teammate, Joe Jordon, joined him at Old Trafford to leave Leeds fans feeling doubly aggrieved.

Their old club, Leeds, succumbed to their favourite ex-manager in the semi-finals of the League Cup as Brian Clough and Nottingham Forest triumphed 7-3 on aggregate. Waiting for them at Wembley would be Bob Paisley’s Liverpool side.

In the Second Division, Bolton Wanderers, Brighton and Hove Albion, Tottenham Hotspur and Southampton were all amongst the pacesetters trying to secure one of the three automatic promotion spots. Struggling to avoid going in the opposite direction were West Ham, Leicester City, Newcastle, Wolves, and surprisingly, Queens Park Rangers, who had nearly won the league two seasons earlier, and Ipswich Town, who had finished in third place just the previous May.

The FA Cup Fifth Round came and went and Blyth Spartans finally bowed out, losing 2-1 to Wrexham of the Third Division after a replay. Blyth had led 1-0 in the first match at Wrexham’s Racecourse Ground right up to the 90th minute when the home side scored a contentious equaliser.

In Northern England, a spate of murders of single and vulnerable women continued with the crimes being suspected to be the deed of a single person, who the press dubbed the “Yorkshire Ripper”. Meanwhile, both ABBA and Kate Bush topped the charts with ‘Take a Chance on Me’ and ‘Wuthering Heights’ respectively.

When Liverpool and Nottingham Forest finally met at Wembley for their much-anticipated League Cup Final clash, a dour affair abated. Not for the first time, and certainly not for the last, Forest threw a defensive blanket across the Liverpool attack which enjoyed the lion’s share of the play but was unable to make the breakthrough and get past Forest reserve keeper, Chris Woods, who was only playing due to first-choice Peter Shilton being cup-tied.

The replay four days later followed a similar pattern, with Liverpool making all the running but being unable to capitalise on their superiority and pressure. Shortly after the hour mark, with Liverpool getting frustrated and pushing too many men forward, Forest hit Liverpool on the break and getting through the offside trap, John O’Hare found himself bearing down on Ray Clemence in the Liverpool goal.

Unable to stop O’Hare by fair means, Liverpool defender, Phil Thompson, made the ‘professional’ decision to bring him down on the edge of the area, Unfortunately for Thompson and his Anfield pals, the referee deemed the foul to be inside rather than outside the area and John Robertson duly despatched the penalty for the only goal of the final. Interviewed on television afterwards, Thompson and his teammate, Tommy Smith, were both comically most indignant that Liverpool’s attempt at blatant cheating had been foiled.

Out of the title race and now bound to finish the season empty-handed as far as the domestic cups went, Liverpool were free to concentrate on attempting to retain the European Cup they had laboured so strenuously to win the previous season. Buoyed by the signing of midfielder, Graeme Souness, from Middlesbrough, Liverpool overturned a 2-1 deficit in the semi-finals to defeat Borrusia Moenchengladbach 3-0 at Anfield and set up another Wembley clash, this time with Club Brugge of Belgium.

By the time Bob Paisley and Ernst Happel were leading their respective sides out for the showpiece event, all the domestic gongs and plaudits had been settled and tidied up. Nottingham Forest had failed in their bid to win all three domestic trophies when they were defeated 2-0 by West Bromwich Albion in the last eight of the FA Cup, but had been consoled by winning the league title by a seven-point margin over Liverpool.

West Brom, under their new manager, Ron Atkinson had fallen in the semi-final of the FA Cup to Bobby Robson’s Ipswich Town, who had then gone on to meet Arsenal, conquerors of Orient in the other semi-final.

Huge underdogs on the day due to the lowly league position the Portman Road side found themselves in, Ipswich had nevertheless played to their true potential on the day while Arsenal pretty much failed to turn up. The single-goal margin by which Ipswich prevailed barely did their superiority on the day justice.

Ipswich had just about pulled themselves clear of the drop zone by cup final day, but the same couldn’t be said of West Ham, Newcastle United, and Leicester City who were all relegated. Moving up in the opposite direction were Bolton, Tottenham and Southampton, led by Lawrie McMenemy.

For the second time in two months, Liverpool found themselves up against a side in a Wembley cup final happy to sit back and soak up their pressure. Unlike the clash with Forest, however, this time Liverpool found there was a way through when the Argentina-bound duo of Souness and Dalglish finally unlocked the Belgian defence to score the only goal of the game.

In the next part of this look back at 1978, we will reminisce about the 1978 World Cup in Argentina as well as have a look at the opening months of the 1978-79 season.