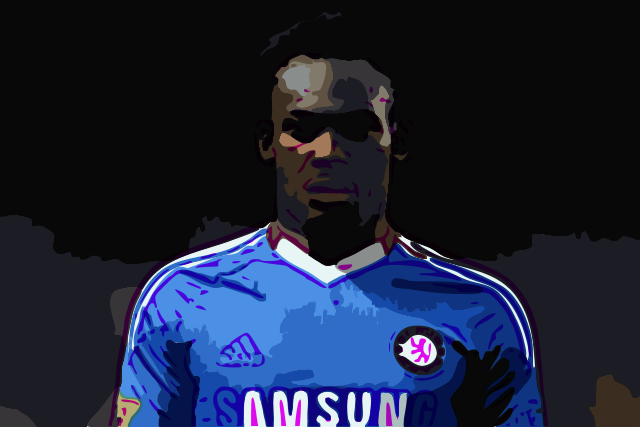 In the Chelsea squad these days, N’golo Kanté encapsulates the midfield action man role – albeit humbly. The Frenchman is small in stature. Subtle and nuanced in character. Yet his tireless playing style is a vast contrast. He truly is a different beast once he crosses the white line. When fit, he seems able to cover every blade of grass. He wins the ball effortlessly. Wins duels that he has no right to win. He’s an opposition player you’d love to hate – but can’t. Rightfully, Blues fans love him. Alas, his position is nothing new. This love of the midfield utility man has found a few before him and one of the finest players to slot into the West London club’s midfield is Michael Essien. This week’s subject, he signed for Chelsea on this day in 2005 and in the years to come would become the spine of many a successful side and an icon of modern African football.

Cast your mind back to 2005. The name Michael Essien was beginning to crop up. In France they already knew him, Corsica especially. He moved to Bastia in July of 2000 from the aptly named Ghanaian side Liberty Professionals. Within two seasons he had become an undisputed starter under new gaffer Gérard Gili. His tenacious and physical style of play started to take form. Although becoming a force in the middle of the park, he was still rough around the edges. This was evident through his penchant for bookings. In the 2002-03 league season alone, he picked up an alarming 12 yellow cards. Come to think of it, this later quote really connects the dots…

“We used to watch the Premiership and the Bundesliga. I wanted to be like Roy Keane, he was one of my heroes. I liked the way he went into tackles” – Michael Essien, 2013

Despite constant chats with refs up and down the country, Essien did make up for his lack of discipline with sheer determination. He scored six goals in Ligue 1, including one in a shock victory against champions Lyon. Bastia themselves, were boosted to consistent mid-table finishes. This could’ve been one the deciding factors in his next move, as amidst interest from PSG and Marseille, he made the switch to L’OL in 2003.

Bastia had actually accepted PSG’s bid as a best offer, yet Essien and Lyon looked a perfect match. The midfielder turned down a contract with the Parisiens to play with the two-time defending champions. Essien spent two years at the iconic Stade de Gerland and was deployed as a box-to-box midfielder. In a lineup that would later involve a young Karim Benzema, Essien would serve as on-pitch enforcer for Juninho as both deeper midfielders Edmilson and Mahamadou Diarra behind assisted the defence. In his two terms, Lyon continued with domestic dominance yet it would be in the Champions League where Essien would meet a key future figure.

In 2004, Lyon would enjoy a brilliant European campaign and ‘The Bison’ as he would later be known, played in eight of the ten matches. In the quarter-finals though, Lyon’s solid Champions League runout would come to an end at the hands of Porto. Eventual champions under a young and exuberant José Mourinho, Porto polished off the first leg at home 2-0 before Lyon tried to fight back in a 2-2 second leg in France. That season, Mourinho’s Porto sent shockwaves around Europe by beating Monaco in that final in Gelsenkirchen, yet the Portuguese boss had been impressed by a certain midfielder.

Inevitably ‘The Special One’ moved on from Porto and took with him Ricardo Carvalho and Paulo Ferreira. In that transfer window, he also looked back on his campaign with Essien on the brain. On the 14th of August, Lyon and Chelsea agreed to a £24.4 million fee. This ended a long and tedious saga and at the time made the Les Gones midfielder Chelsea’s most expensive purchase. He signed on the 19th of August 2005. With Mourinho delighted with his newest acquisition, he said:

“We believe he is the best we can get for his position and he can play anywhere in midfield” – José Mourinho, 2005

At Chelsea, Essien slowly established himself in a quality midfield alongside fan favourite Frank Lampard and the tireless Claude Makelele. However, initially it wasn’t all plain sailing. The Ghanaian’s issue in his first term in England was reining in that lack of discipline. One flashpoint that comes to mind was his tackle on Liverpool’s Didi Hamann. Planet Football suitably described the challenge as a “contractually obliged ‘horror tackle'” yet the ref somehow missed it. The UEFA didn’t however and Essien was handed a two-game ban following the Champions League group game.

Once fully settled though, Essien carved out an excellent spell in West London. Nine years with Chelsea reaped rewards such as two Premier League titles (one of those impressively in his first season), four FA Cups, a League Cup, Community Shield and more impressively a Champions League victory. Described by his teammates at Lyon as a “physical monster”, Essien later developed the nickname “The Bison”. As with Lyon and Juninho, at Chelsea the midfielder’s hard work brought more creative players into the spotlight. That said, his work rate was also paired with spotless technique. He possessed excellent vision, tactical acumen, leadership qualities and oh boy… could he pelt a football from range. You know the goals, well, they’re one of the big reasons that inspired this article.

Chelsea’s number five only bagged 25 goals in all competitions but he blasted many in with signature gusto. There’s Arsenal in 2006, a beautiful outside-of-the-foot effort that Roberto Carlos could’ve wept over. Pinging one from a near commutable distance with his right, it left Jens Lehmann in near-suspended animation. There’s also Barcelona in that infamous 2009 Champions League game. Hit from similar range, imagine, just on the volley. Victor Valdez endured the same fate as Lehmann, this time as the ball smacked the underside of the crossbar in the top left. Sensational viewing.

Essien as an International and his legacy

Michael Essien played for Ghana between 2002 and 2014 and amassed 59 caps with 9 goals. Playing in teams that have included the likes of talent ranging from the great Samuel Kuffour to the Ayew brothers, Essien’s spell with Ghana was a mixed bag. Although he was a proud member of the Black Stars, and earning personal plaudits like Ghana Player of the Year (2007), many international tournaments were a case of so near yet so far. In Essien’s career, Ghana would never win the Africa Cup of Nations. They’d have to settle for a runner’s up spot in 2010, just bettering 2008’s third place.

In terms of legacy, “The Bison” is one of a number of players not only from Ghana but from Africa as a whole that have spread great football in their wake. Fritter away your time on the easy-reading football pages and you’ll see Essien pop up in top XIs for African football. Aside from Chelsea, he also took his physical midfield presence to Real Madrid, AC Milan, Panathinaikos and then ultimately obscurity – as his career wound down in Indonesia and then oddly, Azerbaijan.

His longevity and skill have now extended into coaching as he works with Danish side FC Nordsjaelland as a coach. So, not only does he act as a name of inspiration for the young Ghanaian, his prowess stretches into developing youngsters in Europe. It makes you wonder how many horror tackles and 35-yard screamers the Danish youth leagues will have been seeing since his introduction…