This scout report will be about David Ayala, a young central midfielder from Tigres UANL‘s U20 side. The analysis will come from the match against Xolos U20. This was their first game since March due to the pandemic.

Many European teams see Mexico as a potential region to invest in young talent. Carlos Vela, formerly of Arsenal and Real Sociedad, Javier Hernández, formerly of Man United and West Ham, as well as Raúl Jiménez, who currently plays in the EPL with Wolverhampton Wanderers are some examples of Mexican players who have reached a decent potential in European football.

David Ayala will hope to follow in their footsteps and he is only 20 years old. His position is in the midfield. Within his side’s tactics, as we will see in this tactical analysis piece, he normally acts as a box-to-box midfielder or as an advanced playmaker. The Tigres midfielder’s physical stats are of 1.82 meters and 73 kilograms. His player comparison could be a slightly smaller Paul Pogba, because of his dribbling skills.

The Mexican hidden gem has shown his versatility across the field. He has impressive stamina, which is greater than the current central midfielders of Tigres’ senior squad: Jordan Sierra, Rafael Carioca, Jesús Dueñas and Guido Pizarro, according to their club medical.

In the first matchday, Tigres went against Xolos from Tijuana, where Tigres dominated the game, the midfield, and the result. The game finished 2-0, where David was seen in his position, dominating the midfield and supporting in the last third of the field. His work rate is high in the team, he functions as a player to connect the defence to the attack and keep the space between the defenders and strikers on point.

Also, Ayala has the ability to outrun his opponents to get off the mark. There is needed quickness and acceleration, which makes him faster than the average U20 central midfielder. These types of movements allow him to break the opposition lines and help to distribute the ball faster. The constant movement between channels enables the team to be flexible and unpredictable when in possession.

The lack of pace and aggression in the first team midfield could be solved by David, who has high stamina and is seen on every inch of the field. Not only to read movements but to cover large areas with a single sprint. Pizarro and Carioca are seen to understand each other, but the age has only made them slower and finishing the games with low energy, making them lose or tie games in the final minutes.

Passing and working under pressure

The first game of the year ended with two set-piece goals from Tigres, but that does not mean that David did not perform well. He was one of the most creative players on the pitch in this game, making two key passes, while no other player made a key pass in the game.

His first half was impressive because he maintained 100% in pass accuracy (short 14/14 and 1/1 long), 0.1 xG, and 3/3 dribbles. This shows his quality and reliability on the ball. He did not risk the ball until using his intelligence to know when to make his key pass where the shot was missed, but showing high skill in through passes. Ayala managed to control the match tempo correctly.

With the U20 Tigres tactics, there is a great number of passes and possession, but a few moments for creativity, which David can produce when required. The transition from his natural position to his best suitable position has created a strong and defensive midfielder, whilst still retaining the skill, creativity, and ability on the ball of an attacking midfielder. Having at least one key pass per game this season makes him one of the youngsters to watch for the future.

Tigres boss Ricardo Ferretti has restrained the team from taking long shots to a large extent, but not from making long passes. Ayala could help the team in long passes, as only Gignac, Ayala, and Carioca have the skills to change the ball from side to side. This could help the performance of Javier Aquino, Julián Quiñones, and Raymundo Fulgencio.

With 1/1 aerial duel won and 5/5 tackles won, David had a high-quality defence on the game. Xolos did not make a single shot throughout the first half, showing the compact, well-drilled, and defensively skilful team that Tigres U20 has.

David also has a high IQ, because when the left central defender went to anticipate the ball in the midfield, he went between the defenders to cover the space in case of a counterattack. In addition, David had three successful pressures, which led to risky passes.

Throughout the game, Ayala makes pressures and fake tackles in order to trick the player and make him go another way. Finally, he had a quick reaction to stop a counterattack by a hard header which helped Tigres regroup.

David (black) covers Ávalos (blue) which went to pressure the striker. There was a space for a counterattack, but David read it. The other striker makes the left-back go left wide, leaving the centre free. Ávalos is a great centre-back which makes almost no mistakes and David made sure this play was not one of them.

Not only can he perform attacking duties, but he is responsible for the defensive side of the game as well. In every counter-attack, there is no moment where you see David walking. It is noticeable that he is already positioning his body to the run in order to make the opponents uncomfortable.

With 2 successful defensive pressures per game, Tigres has no goals against when David plays, but an average of a goal per game when David is not on the field. This stat shows the dominance of his positioning defensive movement in the Tigres U20 tactics.

Last but not least, the young Mexican player has a strong ability for intercepting. This ability allows him to stop balls from going through and some of them to regain possession. Not letting the opponent create is one of David’s favourite duties, because he does it regularly. It can be seen throughout the games, that he reads the opposition from the first minute and acknowledge the main targets for passes as well for plays that are predictable.

Tigres may not need to invest in another midfielder player for the future, because David is the future. He is a well-rounded midfielder who performs at a high level and is not too far away from the first-division football. The young player is lacking from match fitness, due to the lack of games thanks to the current viral outbreak. However, he seems to have a more muscular tone and physically better.

He may not be the fastest nor the strongest, but he is an intelligent midfielder and he can bring the best out of himself thanks to his intelligence. He has good potential to be one of the best midfielders in local or even foreign leagues. There is a lot of hidden talent in Mexico, but it is impossible to ignore this one. 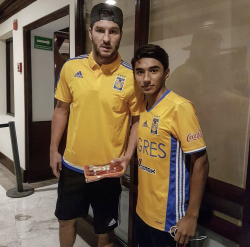 Follow me 🙂
Max Pamanes
Max Pámanes is a young economics student from Mexico. He is a passionate Tigres and Barcelona fan. Max has many friendships with players in the U20 Liga MX.

Follow me 🙂
Latest posts by Max Pamanes (see all)