So far, in his reign as Hibernian manager, Jack Ross has experienced an indifferent start to life in the Ladbrokes Scottish Premiership. In his 22 games as manager, he has racked up 10 wins, 5 draws and 7 losses, all of which have come in the league. Also, under Ross, Hibs have conceded an average of 1.5 goals per game, suggesting a tactical analysis of this Hibs side would likely highlight some defensive frailties. A notable absentee in recent months, has been Ryan Porteous, with the 21-year old having been sidelined with a knee injury since the new year. Aside from a suspension in late December, Porteous had played every minute since Ross’s appointment in late November, suggesting that upon his return from injury, he will be key to Ross’s tactics.

This scout report will provide a tactical analysis of Ryan Porteous and will highlight exactly what the young Scot can bring to both his club, and perhaps in the future, the Scotland national team. In addition, the scout report will identify the areas within Porteous’ game, that if developed, could lead to a big move for the youngster in the coming seasons.

With central defenders now playing a pivotal role in the build-up phase of the game, players must be comfortable playing and receiving under pressure, as well as possessing excellent passing ability, to play their way out of the defensive third.

Porteous’ passing ability is, without doubt, one of his main strengths, highlighted by his 85.82% passing accuracy this season, which when compared to league centre backs leading this metric, such as Celtic’s Jozo Simunovic (91.48%) and Rangers’ Filip Helander (91.87%), is very impressive. Porteous shows patience and calmness on the ball, which leads to him rarely conceding possession and allowing Hibs to successfully build attacks under opposition pressure. The 21-year old’s effectiveness in this area is further emphasised by his 75.18% forward passing accuracy, with Jozo Simunovic’s rate of 84.5% leading the way in the league. The Hibs defender also scores an admirable 75.52% progressive passing accuracy, while the highest success rate belongs to Hamilton Academical’s Markus Fjortoft (82.93%). Success in both these metrics indicates that not only is Porteous able to move the ball comfortably around the defensive third, but he is also extremely capable of finding forward players and advancing possession into more threatening areas of the pitch.

The image above shows Porteous in possession on the edge of the 18-yard box. The Dundee United forwards are high and applying pressure, limiting his ability to play into midfield or wide areas. On this occasion, Porteous is able to play over the first two lines of the Dundee United press, into the Hibs centre forward, who links with the central midfielder, allowing the team to attack in a 4v4 situation.

This second example demonstrates that when there are limited options to play through the opposition press or play onto the striker as shown previously, Porteous possesses the intelligence and awareness to play around pressure. Here, Porteous plays a long diagonal pass to the Hibs left-back, Lewis Stevenson, who is able to secure possession in the middle third of the pitch and advance into the Rangers defending half, allowing Hibs to attack.

This third and final example displays Porteous’ ability to play through the opposition’s block into midfield players. This pass eliminates the first line of the Celtic press and is intelligently played to the safe side of the Hibs midfielder, thus increasing the distance between the player in possession and the nearest Celtic player. This provides Hibs with an excellent opportunity to advance into the final third.

The examples above illustrate Porteous’ passing ability and in particular his vision and awareness, which in turn, enable him to play a variety of passes over, around and through opposition pressure. This chart also emphasises that compared to the other central defenders in the Scottish Premiership, Porteous is one of the best passers of the ball. Notably, his passing accuracy is bettered only by the central defenders of Celtic and Rangers, which suggests that in the future, he may be capable of slotting into possession-based teams of this quality.

In addition to his superior passing statistics, Porteous also ranks among the league’s best for interceptions per game, making an average of 8.44 interceptions every 90 minutes. This indicates that his ability to read the game and his defensive decision making, allows him to step in and effectively block passing lanes, thus stifling opposition attacks.

In the example below against Rangers, Porteous seems slightly out of position, and could potentially be caught the wrong side of Jermaine Defoe should the ball be played in front of the Englishman. However, Rangers midfielder Scott Arfield opts to play a ball into Defoe’s feet, and Porteous quickly steps to intercept the pass, halting a potentially dangerous Rangers attack.

This next example, against Celtic, once again illustrates Porteous’ capability to read and prevent dangerous situations. Celtic right-back Jeremie Frimpong, has driven through the Hibs midfield, leaving the back four exposed with little protection in front of them. Frimpong then opts to play a pass into the feet of striker Odsonne Edouard, where Porteous’ aggressive front-foot defending and excellent decision making sees him again step in quickly to cut out this pass to the Frenchman.

The movement of Celtic’s front players causes major problems for many of the league’s defences, and below we see an example of how Porteous’ excellent anticipation can stifle arguably the most dangerous team in Scotland. Celtic left-back Boli Bolingoli has possession and has central midfielder Callum McGregor on the left side, making a penetrating run in behind. Concurrently, James Forrest comes short towards the ball in an attempt to drag centre back Porteous, out of the block and create a passing lane for McGregor. However, Porteous, once again reads the pass from the Celtic fullback and can step across quickly to intercept the through ball.

Defending in the right-hand channel

Another area of strength within Porteous’ game, is his willingness to defend in the channel and cover his right fullback. He shows great intelligence and calmness when defending in these areas and does well not to recklessly dive into challenges and leave his fellow defenders outnumbered.

In the example above, Porteous isolated 1v1 with Celtic’s pacey centre forward Odsonne Edouard. The Scot resists the temptation to dive in and instead opts to slow the striker down, allowing Hibs to regain their defensive structure. Once this happens and there is enough defensive cover, Porteous challenges Edouard, winning back possession and stopping a dangerous Celtic move.

This next example, from the same game, presents a different problem for Porteous, as Celtic winger James Forrest has received the ball and if given the opportunity, can drive at Porteous and beat him with pace towards the by-line. This is recognised by the young defender who allows Forrest no time to get the ball under control and makes a fantastic sliding challenge, which wins his team a throw-in and again, halts a promising Celtic attack.

Despite his impressive ability to intercept passes into the final third, there are occasions where Porteous’ eagerness to close down attackers in the space between the lines of the Hibs back four and midfield, causes real problems.

In this example above, the Dundee United forward receives the ball into his feet and is immediately pressed from behind by Porteous. However, the young centre back gets too tight to the striker who manages to roll him and turn to face goal. As can be seen from the second image, this creates an issue for the Hibs defence, as the space vacated by Porteous now allows Dundee United to play through. The issue is further emphasised by the right-back’s failure to narrow and cover the space behind Porteous, which sees the Dundee United left-winger make a penetrating run through the defensive line.

This issue was also evident against Rangers, and as can be seen from the image, Porteous has applied pressure from behind when the ball is played into the feet of striker Jermaine Defoe. The experienced striker manages to hold off Porteous and slip in Joe Aribo down the right flank.

Again, the highlighted area indicates that Porteous has left space behind him for Rangers to exploit, which they do. As seen below, Ryan Kent makes a run into the space left by Porteous which causes Paul Hanlon, Hibs’ other centre back, to move across to track Kent’s run, which in turn, gives Aribo freedom to attack into space on the right side of Hibs’ final third.

These statistics support the images presented above and indicate that despite winning well over half of his defensive duels (62.38%), there is room for improvement for Porteous in this part of his game if he is to become one of the league’s best central defenders.

A crucial part of a central defenders’ role is to win aerial battles, and this is another area of Porteous’ game that could be improved. The statistics demonstrate that Porteous’ aerial duel success rate of 54% is below the league average of 63%, suggesting that the young centre back fails to dominate in the air. This may cause him problems, given the physical prowess of many of the league’s forwards, such as Aberdeen’s Sam Cosgrove and Livingston’s Lyndon Dykes.

The image below highlights Porteous challenging in the air alongside Celtic’s Christopher Jullien, a huge aerial threat, and the young Scot is dominated by the Frenchman, resulting in a Celtic chance, which the Hibs defence are just able to scramble away.

This scout report indicates that 21-year old Porteous’ excellent ability in possession is nearing the level of the league’s top central defenders. This suggests that in the future, he could well become linked with a move to clubs such as Celtic and Rangers, or even south of the border. His calmness and decision making in possession, as well as his aggressive front-foot defending, has also caught the eye of Scotland manager Steve Clarke, who called him up for November’s Euro 2020 doubleheader against Cyprus and Kazakhstan.

However, if Porteous is to flourish in years to come and establish himself as one of Scotland’s best centre backs, then he must improve some defensive parts of his game, such as his aerial ability and defensive duels, particularly those where the striker receives with his back to goal. Development of these areas will no doubt solidify his place in the Scotland squad for years to come, and perhaps open the door for a big move in the seasons ahead. 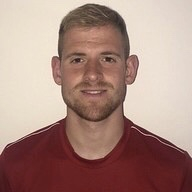 Ross Mitchell
I am a 22-year-old performance analysis student from Scotland.