Brighton and Chelsea this game with an inconsistent base of form, with the aim to put some disappointing recent defeats behind them! Brighton, tasted success in their previous game against Bournemouth, with a 2-0 win courtesy of goals from Jakanbakhsh and Mooy, yet were winless in four prior to this victory.

Whereas, Chelsea came into the game fresh on the back of a superb comeback victory against Arsenal at the Emirates, yet prior to this they suffered an extremely disappointing home defeat to a re-energised Southampton side. Undoubtedly, the key aim here was to begin the 2020 Premier League campaign with not only a positive result but also a positive performance and this tactical analysis will have a little focus on Brighton’s tactics.

Brighton entered the game with only two minor changes, a straight swap in central defence with Shane Duffy departing the starting 11 at the expense of Adam Webster, whilst Alireza Jahanbakhsh was also replaced by Steven Alzate, perhaps in a more cautious move by the Seagulls boss Graham Potter to restrict opportunities for a Chelsea side that are certainly a more dangerous proposition than Bournemouth.

Meanwhile, Frank Lampard reverted to type after making a tactical switch to 3-4-2-1 against Arsenal just a few days prior to this game with Tomori, Emerson and Kovacic being replaced by Jorginho, Reece James and Christian Pulisic. An intriguing battle, with the immediate formation match ups (Brighton, 4-3-1-2 & Chelsea, 4-3-3) suggesting that the midfield battle and exploitation of wide areas would be key to any potential successes.

However, these formations changed within the game! Particularly from Brighton’s perspective who were forced to make adaptations following an early injury to Dan Burn, their formation fluctuated between a 4-3-1-2, 4-2-3-1 and a 4-4-2, although it must be stressed the positional rigidity of these formations were in no way evident with rotations and fluidity between Brighton’s midfield players evident at the vast majority of time during the game.

Brighton’s style of play (in possession)

Building out from the back, upon initial analysis Brighton looked to be positive and create space as much as possible through expanding the distances between both individuals and units. The central defensive pairing of Webster and Dunk split wide towards the outside of the area, whilst the full-backs Montoya and Burn (Bernardo once Burn was substituted through injury) pushed past the edge of the defensive third.

As a result, this created space for the midfield unit to drop in and receive the ball from Matt Ryan in the Brighton goal. This changed fluidly throughout the game, initially within the 4-3-2-1 formation, there were vertical and horizontal rotations from the midfield three of Propper, Alzate and Bissouma with Mooy providing a higher option to potentially split and play forwards directly. However, as the changes in formations occurred this changed to simply two midfielders dropping in to receive, with the outlet increasingly becoming Montoya and Bernardo in wide areas.

However, as we will progress onto later on within this tactical analysis, Mooy continued to drop into narrower positions and began to re-create this three-man rotation within the second-half, despite playing on the right-hand side of midfield.

However, Brighton had limited success in pushing this numerical advantage into clear penetrative passing success. As shown within the analysis of Matt Ryan’s distribution it is evident that the midfield combinations were difficult to complete, with the vast majority of distribution passing through the centre-backs initially and then onto the full-backs and beyond.

Moving on to more advanced play within the midfield third, Brighton retained the same approach throughout the game, despite the change of formation throughout certain aspects of the match. The midfield three retained their space by positioning themselves on differing lines to receive and rotated both vertically and horizontally as mentioned.

When the Seagulls adapted to a more attacking two in attack, either Connolly or Maupay would drop into the space vacated by having no formal No.10 to receive and create space, whilst the opposite striker stretched the pitch by making runs into the half-spaces or making runs in behind the defence.

With a specific focus on Aaron Mooy and Leandro Trossard, even when pushed out onto their respective wings they continued to make the pitch narrow and tuck into middle areas of the pitch. This allowed Brighton to become particularly effective when attacking in wide areas, through the use of overlaps, underlaps and in particular third man runs following a bounce pass into a congested midfield area – subsequently allowing Montoya and Bernardo to exploit even more space in wide areas.

Through the images below, there are a number of areas to understand in Brighton’s approach to play when in possession. Firstly, Mooy’s narrow positioning in the first image shows to highlight how Potter’s team aimed to create opportunities for Montoya to push forward into the forward areas, almost forcing a lob-sided system as a result. This is also highlighted within the image of regular passing combinations, showing how Trossard and Mooy are unnaturally narrow for wide players, despite playing the vast majority of the match as wide midfielders.

Secondly, the partnership of the attacking duo, Connolly and Maupay is evident in the first image with both moving in opposite directions to create gaps between the Chelsea defenders. Also, the attacking runs of Montoya are evident, although Brighton did not exploit this as much as they would have wished – which may be something the Seagulls can look to implement over the future games in the season.

Progressing onto the final third, there was very little success for Brighton on the attacking front. Their attacks were mixed the left, right and middle, although their Expected Goals was higher within the central areas as would be expected due to the positioning of their midfielders and strikers.

However, one area that Graham Potter will be pleased with, linking to the previous example of narrow midfielders is the exploitation of forward and 3rd man runs from the full-backs following combinations in the tighter central areas.

Following triggers of passes into midfield, Bernardo and Montoya explosively drove into the final third and looked to deliver cutbacks into the onrushing Brighton attackers, though again there was limited success in the eventual output. There was variation within this, Montoya used overlaps frequently, though occasionally underlapped to retain an element of unpredictability, though Montoya’s position restricted his opportunities especially in the second half as he was playing as if he was a right midfielder for many of the attacking moves.

On the opposite side, Bernardo created good opportunities through underlaps more often, as Trossard seemingly preferred drifting into wider areas allowing Bernardo the space to drive infield.

Brighton’s style of play (out of possession)

Transferring focus onto Brighton’s approach to play out of possession, they had a structured approach to their pressing and engagement with Chelsea’s backline. Initially, the two strikers (Striker and No.10 within the 4-3-1-2/4-2-3-1) restricted the passing options available to Zouma and Rudiger, with one applying pressure whilst the other dropped off, however still in a position to press the opposite central defender whilst also protecting the bottom point of Chelsea’s midfield, usually Jorginho.

It must be expressed though, that this was not a press seen through the performances of Manchester City or Liverpool, it was a more conservative approach to restricting the passing lanes and forcing Chelsea into “traps” to win the ball back.

There was no engagement until the ball was released from the central defender, apart from natural triggers of bad touches or passes. Rather, Brighton looked to pounce upon Reece James or Cesar Azpilicueta whilst the ball was travelling through Mooy (before Jahanbakhsh was introduced) and Trossard, or upon Kante/Mount in central areas.

Although the effectiveness of this approach was different within a medium block, when play progressed into the middle of the pitch, Brighton took a similar approach, with the two strikers restricting the opportunities to the central defenders.

However, due to more space being available because Brighton’s backline dropped off, there were instances where Chelsea were able to play one-touch combinations into their full-back, midfielder and into the wingers who were Willian or Pulisic (Hudson-Odoi later on). This can be seen in the first image below, where Azpilicueta was able to quickly combine with Jorginho in central areas to push Chelsea into an attacking position.

Similarly, in the second image, a simple combination between Azpilicueta, Kante & Jorginho open up an opportunity for Reece James to drive into space vacated due to the narrowness of Brighton’s midfield and formation.

Interestingly, at times within the medium block it appeared that Brighton wanted to force play into central areas to take advantage of their numerical superiority, though many times the man-man pressure was too little and without locking on to Chelsea’s players, Chelsea were able to escape and create attacks. This would be a particular area of focus upon future Brighton matches.

However, the biggest weakness within Brighton’s approach out of possession was undoubtedly their vulnerability to a switch of play, even more so when combined with a combination of passes within a congested midfield area.

As shown within the following examples, there were opportunities across all areas of the pitch for Chelsea to switch play and create overload opportunities on the opposite side of the pitch. If we link this into Brighton’s approaches with formations, even though they attempted to move to a 4-4-2, this lacked protection in wide areas as Mooy and Trossard were narrower which allowed Chelsea opportunities to exploit, particularly when in transition.

An ideal approach may have been to simply double up on Chelsea in wide areas and drop one of the striking options into a No.10 role out of possession to prevent Jorginho from dictating possession.

Finally, touching upon Brighton within the defensive third. A vast amount of Chelsea’s attacks were down the right side, as shown by the chart that has been shown previously. Though, a lot of effectiveness was within wide areas on both sides. As can be expected, there was much congestion in central areas from Brighton however the lack of recovery in wide areas allowed overloads when Reece James, in particular, looked to combine with Willian to attack. Chelsea will be disappointed with the lack of clinical edge within these areas, though their goal in the first half did come from one of these attacking forays from Reece James.

Ultimately, Brighton had a lot of positive aspects of their play in possession, when on the ball within the defensive and midfield third they built possession well and looked comfortable even when subject to pressure from Chelsea’s attacking line led by Tammy Abraham. However, this did not correlate to attacking success and clear chances were few and far between in the final third.

On the flip side, Brighton were organised and restricted Chelsea’s clear goal-scoring opportunities in the first half. However, as Brighton opened up in the second half I’m sure a worry for Graham Potter will be how easy it was for Chelsea to create overloads through a quick combination in midfield and switch of play, though to their luck Chelsea simply couldn’t capitalise on any of these opportunities! Arguably, Brighton can take heart from the fact they only conceded from a set-piece, though this is something that will be worked upon by Graham Potter.

Despite this, a wonder-goal by Jahanbakhsh late in the game did rescue them a point that I’m sure many Brighton fans would have taken before the game, so despite the difficulties within the game, this can still be filed under a positive end result for Brighton! 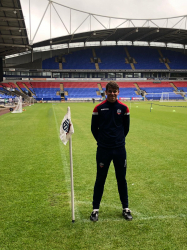 Football Teams That Agreed to Promote Gambling for Money

Top Managers who will be Feeling the Pressure this Year