Argentina and Venezuela came into this match with unexpected results. Venezuela were unbeaten in their group, finishing in second place with five points, while Argentina mightily struggled against the likes of Colombia and Paraguay, only narrowly getting through the group stage through the crucial 2-0 win over Qatar.

After some terrible formation testing in the first two matches, Lionel Scaloni seemed to have found a more reliable and stable formula, with which they can beat inferior opponents without having to dominate possession. Yesterday, they were happy to slow things down, sit deep and absorb Venezuela’s pressure after scoring the first goal. In this tactical analysis, you will find out both managers’ strategies for this match and how did they fare against each other.

Venezuela started this match in a 4-1-4-1, with Junior Moreno playing behind Tomas Rincon and Yangel Herrera in central midfield. Darwin Machis was the notable left winger, and Salomon Rondon was used as a sole striker.

Argentina used a 4-3-1-2 throughout the match, with Juan Foyth being pushed to the right-back position. Rodrigo De Paul, Leandro Paredes and Marcos Acuna sat behind the legendary Lionel Messi, while Lautaro Martinez and Sergio Aguero were the two forwards. 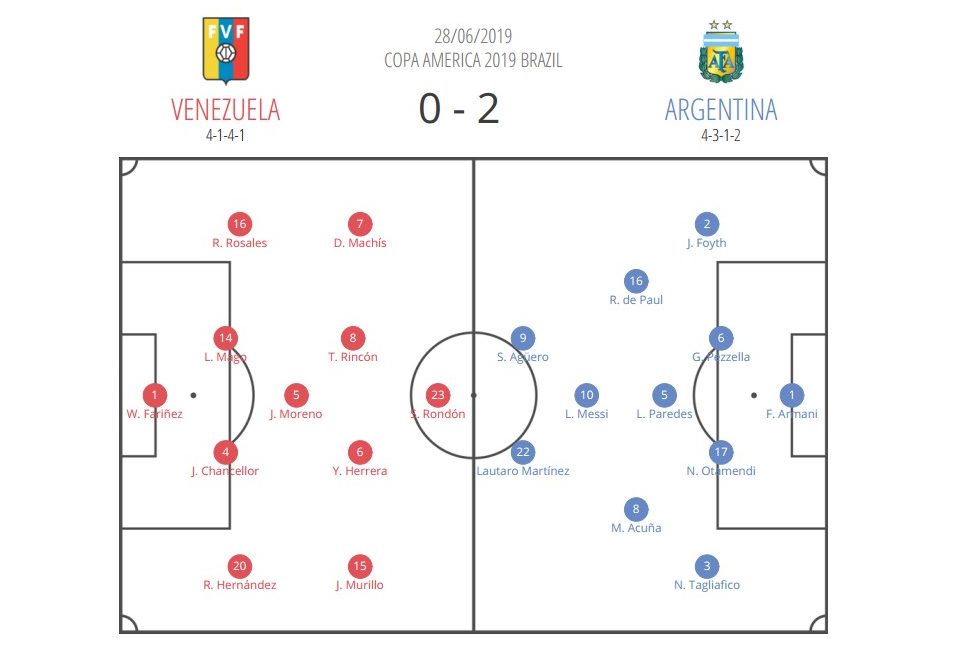 One small revelation: this would be the only period in the match that Argentina had more possession than their opponents, which sounds rather unbelievable. One important thing that lead to this was Lautaro’s tenth-minute goal. Argentina dominated 70% possession during this spell, attacked fiercely with eight shots registered (they took 11 shots during the whole first half and 17 shots throughout the match), got the goal and then happily slowed things down and let the opponent got more and more of the ball.

Argentina operated in a 4-3-1-2 with the ball. There was a lot of ball circulation between the back four as they seem very conservative in their positioning. Below we can see that the positioning of Tagliafico and Foyth throughout the match were quite low.

The low positioning of the full-backs can lead to a lot of U-shaped, sideways passing. The back four look somewhat isolated from the higher lines. If they were higher, they would have had more passing lanes opened, allowing more short-passing penetration through both the centre and the flanks. The width was often provided by sided central midfielders Acuna and De Paul, who are essentially wide players by nature. Aguero and Lautaro also moved wide a lot to help to progress the ball forward.

As Venezuela tried to block central progression and Argentina’s central players moved wide to stretch the opposition defence (as the full-backs didn’t move forward a lot to provide width), La Albiceleste often had to attack through the flanks by the means of low and whipped crosses. Here we can see that only 22% of their attack went through the middle, which is pretty low.

One way of getting through the U-shaped cycle is a long pass straight to either of the two forwards. If it leads to an aerial duel, then Lautaro and Aguero will more often than not lose it, as they are both quite short. Their percentage of aerials won for this match were 40% and 11% respectively. Below we see a through ball from Tagliafico to Aguero. This is a better option as it exploits the space behind Venezuela’s defensive line, and El Kun (and the same case for Lautaro) can use his pace and timing – his main strengths – rather than engaging in aerial duels. Otamendi was Argentina’s most active long passer with eight long balls attempted.

Venezuela defended in a 4-1-4-1 with the aim of staying narrow and compact to block passes through the centre. This was a reasonable strategy as Argentina don’t have forwards with good headers in their squad: Icardi was not called up for this Copa America, leaving Scaloni with no forward taller than 1.74m. A deep 4-1-4-1 could ensure Messi is often surrounded by two or three Venezuelans who would look to challenge him strongly, making sure La Pulga didn’t have enough time and space to work his magic. It was the central midfield area that Venezuela tackled opponent’s ball-carrier most fiercely, as they use their numerical superiority in this area to stop central progression at all costs.

Rondon mainly stayed central and at times close down the nearby opposite player. The higher midfield four tried to stay central (most notably the position of right winger Jhon Murillo in the below picture) and close to each other. The winger would step out of position to press (but not intensely) the opposite full-back if that player had the ball near him. Venezuela’s full-backs will take care of the opponent’s side central midfielders if they are high and wide like in the picture below.

In situations like the below picture, there should have been third-man combinations with the full-back to find the side central midfielder, but Argentina’s centre-back will often simply pass to his centre-back. The passing of the back four was often too slow to penetrate their opponent’s defence, and De Paul and Acuna often had to drop deep and central to help circulate the ball.

We can see most of the top passing links involved the defenders, with number one being the link between the centre-backs. This definitely shows that Argentina has some problems with their build-up. In addition, only 23 out of Argentina’s 293 passes were to the final third. Their passes often lack progressiveness, quality and penetration. It would be safe to say that they seemed content with getting the early goal, and for the majority of the match did not try hard to push for another.

Sometimes due to Argentina’s slow build-up, Venezuela’s wingers had the time to even move close to each other to overload the ball side and coordinate pressing. Venezuela is disciplined and systematic with their pressing: they moved together and patiently waited for opportunities to step up and close down the opposition. When right winger Murillo moved inside like the below picture, right central midfielder Herrera would move to the wing to cover him, allowing him to move high to press.

Argentina’s most prolific passers last nights were Paredes (40 passes attempted) and De Paul (38 passes attempted). Paredes was dictating play from deep and stopping opponents’ attack, while De Paul played higher and more on the right half-space, stretching the opposition defence and connecting with the forwards.

They were the main engine in Argentina’s game, helping the defenders circulate the ball and help progress the ball forward. They proved to be incisive passers too: De Paul got one key pass, while Paredes got two. In the example below, Paredes’ wonderful first touch helped him get away from an opponent. He then raised his head up very quickly and found Martinez, who unfortunately hit the post.

Messi played very far from the opponent’s goal in this game, mainly helping with the build-up with his dropping deep movement. These movements can also drag opponents’ defenders higher upfield, creating more space for Aguero and Lautaro to run into. He still got three key passes, the most on the night though.

Here, we see Messi dropping between the opponent’s first two defensive lines to help to bring the ball forward. He lacked some energy in this game though, often failing to take on the opposition player (only one successful dribble out of five attempts) and was bullied by many surrounding opponents multiple times.

As we said, Argentina controlled 70% of the ball in the first 15 minutes. But throughout the rest of the match, Venezuela had 64.2% possession.

How did they manage to do this?

Argentina’s 4-3-1-2 is a good formation to block central progression with its numbers in the middle. Lautaro and Aguero showed good work rate in this match, willing to close down opposition defenders multiple times. Messi was much lazier and often static, which means that Argentina’s front three did not coordinate pressing effectively and systematically, and Venezuela could still bring the ball forward without a lot of difficulties, though more on the wing than in the centre.

A weakness of Argentina’s pressing scheme is that it will leave the opponent’s far-side full-back and winger free on the wing, as the whole Argentina unit has been dragged to the near side. A good switching team with pacey full-backs and wingers may exploit this easily. Venezuela did try to switch flanks at times, but their passes and wingers’ quality were not enough.

To escape Argentina’s two-one forward triangle, pivot Moreno often became the third centre-back in the build-up. In these situations, Rincon, a good passer, will move to the left-back position to support ball circulation, allowing left-back Rosales to push upfield. Venezuela attacked more through the right, with Moreno, Rincon, and Rosales the three players with the most accurate passes on the field.

Look at the heatmap of Rosales and Rincon. Rosales showed an incredible work rate, running back and forth on the left side.

From there, though, Venezuela showed their lack of idea and creativity against Argentina’s numbers at the back. They mostly tried long balls to Rondon, who is very good with holding/shielding the ball, then passing to the near winger and rushing into the box. We all know how good he is with headers, but isn’t it too predictable if all you do is try to cross the ball to him? Rondon won four headers, but Pezzella and Otamendi even won five each: Argentina’s centre-backs are also strong headers of the ball. Acuna also won five aerials.

Left winger Machis, understandably got a lot of the ball, and he did attempt multiple dribbles, but Foyth was never caught out of position and more often than not stopped him. Foyth registered six successful tackles, the most on the night.

Using a deep 4-1-4-1 to penetrate through a defensive Argentina side was not effective. Therefore Dudamel tried the top-heavy 4-2-3-1 formation, with Rincon joining Moreno to form the double pivot. Soteldo replaced Herrera to become the attacking midfielder – thus Rondon became less isolated. Soteldo is an explosive dribbler, completing five successful dribbles (the best of the night) in just more than half an hour.

Venezuela had more and more control of the ball as the match went on. They also started creating better chances, but couldn’t beat Armani even once. Argentina finished the match 2-0 with a goal from substitute Lo Celso after Venezuela’s build-up play at the back was disrupted by Argentina’s pressing.

In the end, Argentina deservedly won this match, despite their multiple issues shown in the analysis. Venezuela was allowed a lot of the ball but didn’t seem to create much danger from it. Argentina will definitely look to beat their archrival Brazil, who came through a penalty shoot-out against Paraguay. La Albiceleste will have to really improve their tactics, though, if they want to make it to the Copa America final for the third time in a row. The semi-final will surely be one you can not miss.