Uruguay and Japan came into this match after contrasting results. Uruguay destroyed Ecuador 4-0, while Japan unluckily lost 0-4 to Chile in what was actually a fairly even contest. Luck favoured Japan this time though, as they managed to hold on for a draw against the South American giant. This tactical analysis will show you how the team played and the tactical match-up between them. 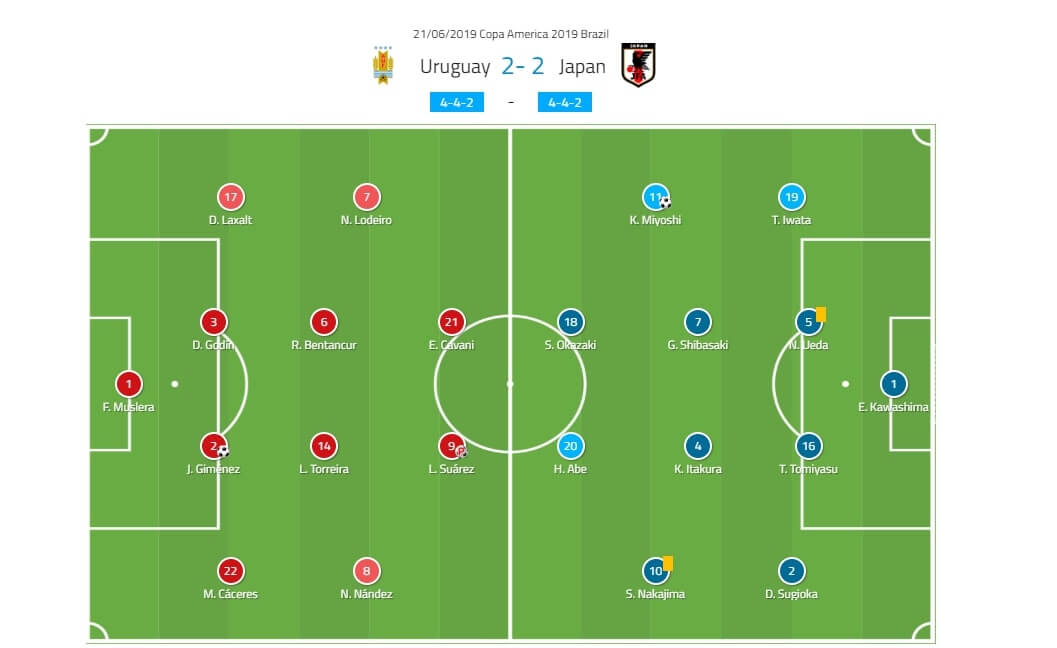 Uruguay lined-up as expected. Apart from Nicolas Lodeiro, the other 10 are familiar faces from the 2018 World Cup: the infamous front two of Edinson Cavani and Luis Suarez, the solid back four of Diego Laxalt, Diego Godin, Jose Gimenez and Martin Caceres. Oscar Tabarez made only one change to the eleven that comfortably beat Ecuador: Arsenal’s Lucas Torreira was chosen instead of Matias Vecino.

In contrast to Uruguay’s consistent line-up, Japan made six changes to their previous eleven against Chile, as (also Japan U23 coach) Hajime Moriyasu wanted to prepare their young squad for the Summer Olympics held in Tokyo next year. The centre-back pairing was still Takehiro Tomiyasu and Naomichi Ueda, the promising wingers of Shoya Nakajima and Koji Miyoshi were selected alongside forwards Shinji Okazaki and Hiroki Abe.

How did Uruguay set up their defence?

There wasn’t much of a surprise about the way Uruguay started this match. They both attacked and defended in a 4-4-2. First, let’s talk about their structure without the ball. Uruguay always try to be narrow and compact, and the whole unit moves a lot with the aim of overloading the ball side.

Their forwards don’t press a lot, but the midfield does, and they do so intensely. Uruguay use a medium-high press, which will be trigger when a Japanese carries the ball close to Uruguay’s midfield line – which is often not far away from the forwards as Uruguay wants to be horizontally as well as vertically compact.

Here we see Uruguay’s two banks of four in a small amount of space. The midfielders, sometimes in coordination with the full-backs tried to surround the ball-carrier from all directions, giving him no space and time. The aim is to prevent forward progression, and here the ball-carrier had to pass back.

Here we can see that Nakajima’s near passing options were all covered, and he was pressed intensely by Caceres and Bentancur.

Here again, Uruguay’s midfield four are extremely narrow and close to the ball, forcing Nakajima to switch the ball to the other flank.

With both teams using a 4-4-2 formation, there was numerical equality in all areas of the pitch – things would then come down to individual quality. This made it very difficult for Japan to attack as they are a weaker side, both in terms of class and physicality. Their movements were most of the time quite rigid, so there was no numerical superiority to break through Uruguay’s solid defence.

Their short passing style requires more flexible and smart passing and movements, as Uruguay is a very hard working side who move constantly as a unit to cover all the penetrating passing lanes.

Therefore, Japan often tried some early crosses in but Japan’s wingers played on the “wrong” sides (for example the left-footed player plays on the right), so the quality of the weak-footed crosses, especially Nakajima’s, were not good. Okazaki and Abe are no match for Godin and Gimenez in aerial duels anyway. Atletico‘s centre-back pairing Godin and Gimenez won 9 aerial duels combined, while Japan’s forward pair won only one in total.

Japan mainly attacked through their wingers. Nakajima on the left is a good dribbler with exquisite skills, who often cuts inside and combines with the near central players to penetrate Uruguay’s defence. On the right, Miyoshi hugged the touchline more, trying to combine with the near central midfielder and the right back to progress forward. He also positioned himself smartly to open a passing lane through the flank for the central midfielder and at the same time giving himself time and space to put a cross in.

Meanwhile, the forwards try to come deep to get the ball and help to move the ball forward. Here we see them positioning smartly between Uruguay’s two banks of four.

There was only one instance that Uruguay’s system was really disrupted. That was the one event that lead to the first goal of the match. Shibasaki, the ball-carrier, was as expected closed down by several Uruguayan players. He found Miyoshi on the other flank, thus a 2 v 3 was created.

Godin was not in a good position to support Laxalt – Miyoshi then dribbled past Laxalt and beat the poorly positioned Muslera at the near post from a tight angle. It has to be said that Laxalt was already injured and was replaced by Giovanni Gonzalez right after that. Gonzalez played on the right, while Caceres moved to the left.

Uruguay’s attacking strategy is rather simple, the sophisticated part of their system is without the ball. A common play is a long ball from deep by Muslera or the centre-backs to the centre forwards, who will lay the ball off to the winger – the winger will run down the flank to cross in. Suarez and Cavani understand each other very well, and both of them can wreak havoc on the opposition defence by themselves.

This second-ball, individual reliant strategy was enough to create many dangerous opportunities for Uruguay because they have the physical advantage to win the duels – well sometimes the Japanese didn’t even bother to try to challenge for the header. Cavani is a very industrious player: he was very willing to come deep or move to the wing at times to facilitate the play, notably switching the ball to the other flank; he also ran deep a lot to help the defence, completing two tackles.

Uruguay’s full-backs are not good passers, and during the build-up they often went higher up, expecting a long ball forward and challenging for the second and third balls if necessary. Below can see the full-backs, double pivots and near winger’s positioning below to help them coordinate pressing right away if Japan won the second ball.

Sometimes when Laxalt went high up, we can see Lodeiro coming deep to help with the build-up. Lodeiro is by nature an attacking midfielder, and he likes to roam a lot to get the ball. He is a good passer – he made 9 key passes, the most on the night, alongside an assist to Gimenez from the 66th-minute corner. In contrast, Nandez tried to stay up high and hug the touchline most of the time. He wanted to run with the ball down the flank and get the cross in. After finding Nandez on the flank, Caceres often ran straight into the box to receive his crosses.

During the build-up phase, either Bentancur or Torreira will come deep to support the centre backs. At times, the centre-backs and double pivots looked rather isolated from the rest of the team, as they had all moved high up the pitch to challenge for the long ball. Uruguay never tried to play from the back anyway.

Japan also defended in a 4-4-2 mid-block. Like Uruguay, they also try to compress the ball side.

The forwards don’t try to press Uruguay’s centre-backs but rather positioned themselves in the middle, close to each other. They care more about the opponent’s pivots instead. Japan’s central midfielders will close down these pivots if necessary. The wingers will take care of the opposite full backs.

In the 60th minute, attacking midfielder De Arrascaeta came in for Nandez. Uruguay then had  no real wingers left on the field, suggesting they switched to the 4-3-1-2 they famously used at last year World Cup, with De Arrascaeta the highest midfielder, Lodeiro (and from the 73th minute, Fede Valverde) and Torreira on either side of Bentancur, who often stays deepest to protect the back and distribute the ball.

The full-backs were expected to take charge of the wing attacks by themselves, as the central midfield four pulled Japan’s system narrower and also helped Uruguay take complete control of the centre. In the last third of the match, Uruguay got 66.8% possession, comparing to the 54.5% in the first two thirds. Fede Valverde and De Arrascaeta helped Uruguay penetrate Japan’s defence much better, with the latter registering 4 key passes (2nd best on the field behind Lodeiro) despite only playing 30 minutes.

They also use the 4-3-1-2 in defence, allowing Japan more time on the flanks so the likes of Miyoshi could cross with their strong foot. Tabarez purposefully did that as he knew Japan couldn’t create much danger from the wings against a taller Uruguay side. Uruguay’s side central midfielders could still help the full-backs if needed.

Overall, this was a good display from the Japanese youngsters. Uruguay would definitely believe that they should have got more from this match, as they missed some great chances and were unlucky at times. This would be an encouraging result for the Japanese youngsters as they look to build for the future. Uruguay will look to beat group C leaders Chile in the last match to claim the top spot, while Japan will need to beat Ecuador to become one of the best two third-placed team at the group stage. One thing is for sure: if they advance to the next round, they will be tough challenges for other teams in this competition.