This weekend, the third match-up of the season between Newcastle United and Watford took place. After a home win for Newcastle in early November and a draw at Vicarage Road back in December, both teams met once again for an intense battle in the FA Cup. This time, Javi Gracia’s side managed to beat Newcastle, as Watford won the game 2-0. We will provide a tactical analysis with the help of statistics.

Just like in December when they met in the Premier League, Rafael Benitez set his team up in a 5-4-1 formation. Watford on the other hand played a 4-1-4-1 system, which was surprising as Javi Gracia has relied on a two-striker system throughout the season thus far. Instead of Isaac Success, ex-Barcelona winger Deulofeu or Troy Deeney up front, Watford started with former EFL star Andre Gray. The 27-year-old striker justified his coach’s trust with the important opening goal.

Success on the other hand played as a left winger in this slightly different one-striker system and did a good job. Man of the match though was none other than 19-year-old central midfielder Domingos Quina, who was by far the most active player on the field with 75 touches and 58 passes. The young Portuguese talent was without doubt an important factor in Watford’s game, as individual performances decided the game.

Watford’s problems in the build-up

Obviously, Rafael Benitez came prepared, as Newcastle did not allow Watford to circulate the ball. Watford tried to use their full-backs rather often in the build-up, so Janmaat and Masina had many touches. The following image demonstrates the resulting problems. 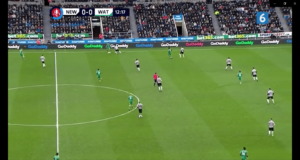 Masina receives the ball, but his body positioning is not optimal. The only option is to play the ball to the central midfielder, who can be pressed easily by the opponent. Other than that, playing back to the centre-back is dangerous with the opposing striker nearby.

As Newcastle closed down the wings properly, Watford’s build-up got stuck pretty often. Central midfielder Quina tried to solve this problem, but a pass success rate of 77% as a team demonstrates that Watford had issues circulating the ball.

Looking at the image above from Newcastle’s point of view, we can see that Benitez built a stable defence. The back line with five players is useful to defend wide without having huge gaps between each player. Furthermore, the midfield line does also provide width, so that the opponents’ full-back can be put under pressure.

As a team, Newcastle shifted towards the ball compactly and reduced Watford’s options. Also, the gap between the lines was held quite small. This minimization of space led to a good control of the opponent, even without having the ball.

Occasionally, we can observe that Newcastle tried to press a bit higher in order to provoke long balls by Watford. Consequently, Watford’s reduced possession percentage and their mere three shots on target underline the positive effect of the measures taken by Benitez.

While the defensive measures were rather good, the attacking performance of Newcastle needs to improve drastically. The attacking match plan relied on long balls, as can be seen in the following image. 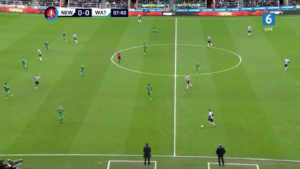 The full-backs go high up the pitch. Left-back Matt Ritchie is not even in the frame anymore. Thus, there remains a back three plus the two central midfielders. The central midfielders stay nearby in case there will be a need for a short pass. In fact, there are some sequences where the ball is circulated amongst these five players.

Most of the time though the long ball occured. The team is thus parted into two separate pieces. The five players up front tried to hold the ball when it came long, or in case the defender won it and Newcastle tried to counter-press. As Watford defended these long balls well, Newcastle only got one shot on the target.

Counter to end the game

During the last minutes of the game, when the score was just 1-0 to Watford, Newcastle tried to find the equalising goal. After a loss of possession, one rare counter-attack occurred which Watford effectively used to end the game. 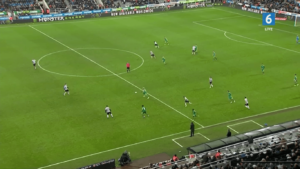 As the image shows, Newcastle only had three defenders behind the ball. This one situation in the 90th minute was one of the very rare occasions where a counter-attack could be seen in this game. Nonetheless, it could have been defended since Newcastle has still the numerical majority in this situation.

The individual class of Watford’s attackers sealed the deal, however. In the end, Isaac Success scored the goal after an assist by Quina. Watford’s individual quality and effectiveness decided the game. Newcastle can now focus on the Premier League, while Watford continue on their FA Cup journey.

If you love tactical analysis, then you’ll love the digital magazines from totalfootballanalysis.com – a guaranteed 100+ pages of pure tactical analysis covering topics from the Premier League, Serie A, La Liga, Bundesliga and many, many more. Buy your copy of the January issue for just ₤4.99 here, or even better sign up for a ₤50 annual membership (12 monthly issues plus the annual review) right here.