The race for the Premier League continued at the John Smith’s stadium where the relegation-threatened home team currently fighting for relegation, Huddersfield Town faced current champions Manchester City. Pep Guardiola had the obligation to win after Liverpool fought more than usual to beat 4-3 Crystal Palace. Manchester City were clear favourites but had to fight more than expected to grab the three points from a team that always felt happy with a tie.

The result left Huddersfield without a manager, as David Wagner left his post by mutual consent leaving the team at the bottom of the table. In this analysis, we dig into the tactical concepts that arose during the game and that allowed Manchester City to score 22 goals in the last four games, without any goal against.

Huddersfield Town started the game with a defensive tactical positioning, a 4-5-1 that had Diakhaby as the lone attacker, and with the rest of the team focused on containing the attacks of Manchester City. The line in the middle of the pitch stood just in the middle between the goal area and the middle line. 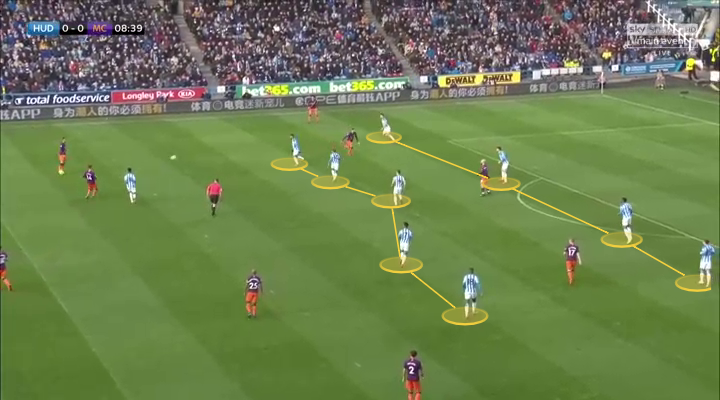 They applied a mix between a defensive zonal-marking and man-marking. When Manchester City had the ball until the final third of the pitch, they stood marking their zone waiting for them to move forward, and as Manchester City moved closer to their goal area, they had individual marking to the player holding the ball and the ones in front of him.

As they rotated the ball laterally, the man-marking scheme rotated into the new player holding possession in Manchester City. But always focused in the midfield and attack of Manchester City, if the ball reached the defensive line, they would not press higher and wait for Manchester City to move forward. Look at the sequence below where there is no pressure on defenders Laporte and Otamendi, but as Danilo and Fernandinho receive the ball, Huddersfield immediately presses them. 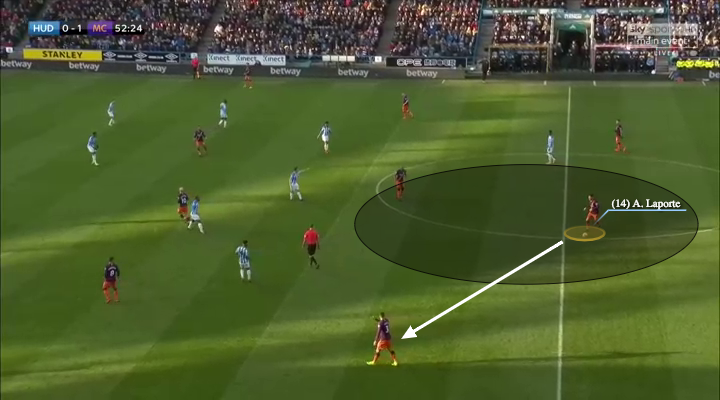 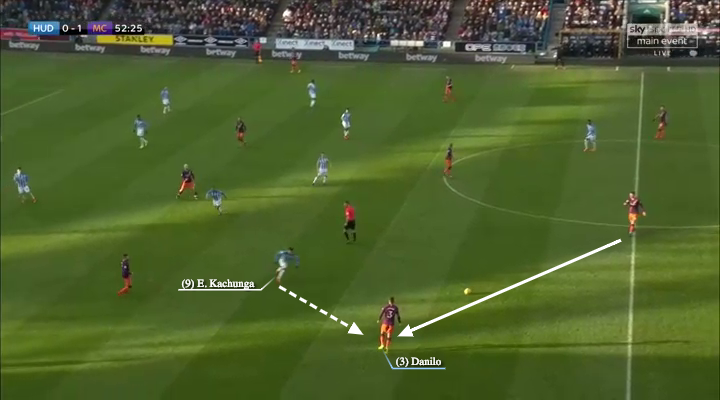 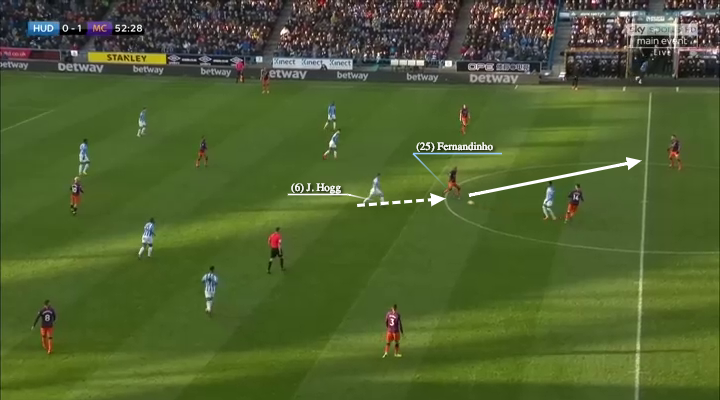 Meanwhile, Manchester City continued with their usual 4-3-3 formation, with some specific rotation, including positioning Danilo as left-back and Walker as right-back, something we highlighted in the report against Liverpool where Guardiola put Laporte as left-back when he had Walker in the bench. Although against Liverpool they had higher defensive concerns with the rival’s forwards that could justify that,

Using two natural full-backs allowed Manchester City to better use the wings and rotate the ball to try to open Huddersfield’s defensive setup. They made more vertical deep movements to pull some of the midfielders out of their position. In the middle of the pitch, Guardiola had Fernandinho as centre-midfielder and Gündogan and Kevin De Bruyne as inside midfielders.

Manchester City had a hard time trying to open up spaces to get closer to Huddersfield’s goal. The home team’s defensive positioning was very cohesive, all movements were very well mechanized and seemed to have been deeply trained during the week reducing the creativity of the players.

The first goal came after a long shot from Danilo that was deflected in. After the first goal, we saw some insinuation of Huddersfield trying to step up and position themselves higher, but it didn’t last much, and they lacked any offensive strength after. While Manchester City, although had possession, continued to have trouble to create any clear chances.

On both sides, Manchester City had to use long-balls to try to get closer to Huddersfield goal area without much success. Alternatively, on the right-wing Sterling had to move back to be able to receive the ball, maybe too much to inflict any danger, and on the left side, Sane and Gündogan alternated interesting deep runs. 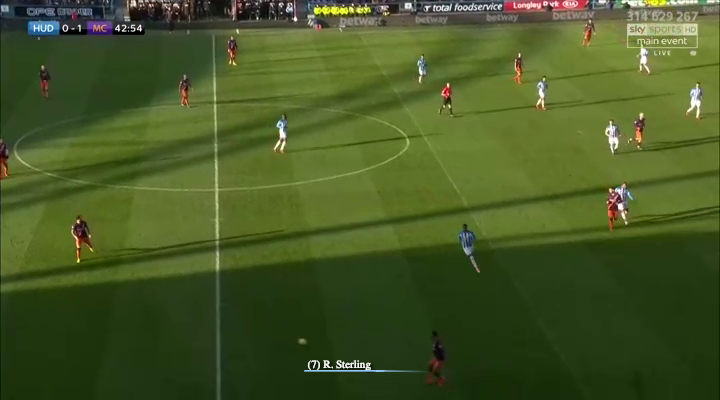 Those runs were more useful to pull defenders into the middle allowing the ball to be crossed to the other player staying wide, rather than getting the ball into the goal area, but Huddersfield players were fast enough to reach the receiving player with two or even three players. 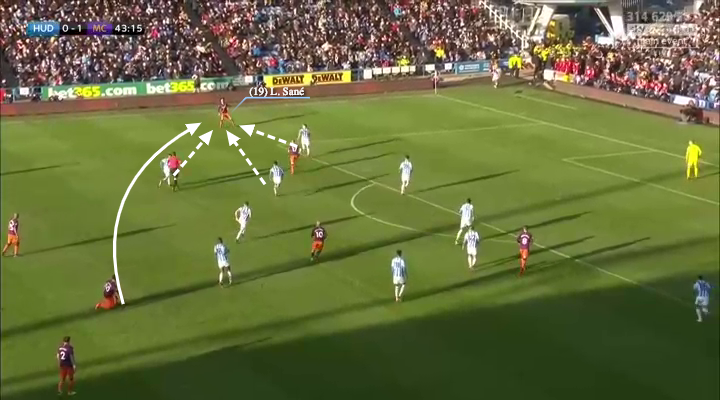 The tight spaces and lack of offensive creativity by Manchester City resulted in very few clear chances for Guardiola’s team, that had seven shots during the first half but only one on target, the goal by Danilo.

After 10 minutes of the second half, the game was over

The second half started in a similar fashion compared to what we saw in the first half. Huddersfield kept their defensive positioning while Manchester City kept possession without enough deepness in their build-up. The conservative positioning of the home team resulted in Manchester City losing possession more than usual high in the pitch, as closer to the middle they were not pressured enough to lose a lot of balls.

In the same direction, Manchester City only recovered six balls in the first third of the pitch out of 77 total recoveries, small share considering the intense pressure we are used to seeing from Guardiola’s team when they lose the ball. This is because as soon as recovered Huddersfield tried long balls to Diakhaby that was usually easily recovered by Manchester City. 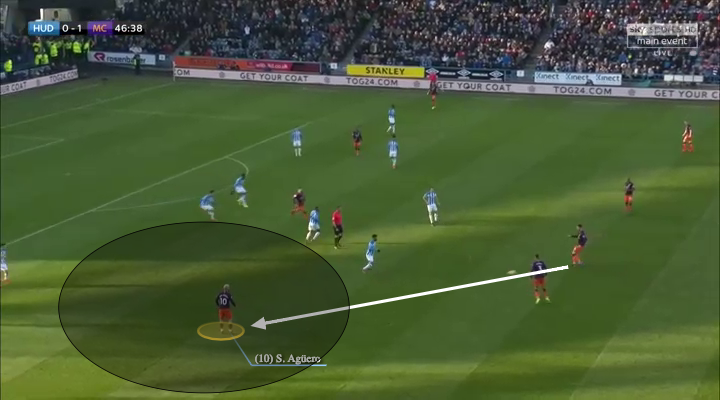 Agüero had a hard time receiving balls with enough advantage close to Huddersfield’s goal. As a result, he was forced to move back or wide to be able to receive the ball. These types of movements are very well managed by the Argentine striker, and usually opens up spaces for both wingers and midfielders to receive with much more space in front of them.

The perfect example for these types of movements and positional swaps is the second goal scored by Sterling. As Agüero falls back to receive the ball, he opens a space in the middle that is used by Sterling to receive a long ball opening to the left. They start passing the ball between Sterling, Sane, Gündogan and Kevin De Bruyne, and suddenly Sterling, located as left-winger at that moment moves to the centre of the attacking front pulling to defenders with him and leaving the left wing open for Sane who receives unmarked.

He crosses the ball and is headed home by the same Sterling, now on the right flank of the attack, and also completely unmarked. This offensive versatility is probably the biggest asset Guardiola has influenced in Manchester City game plan. In the sequence below you can see all the movements happening before the second goal by Sterling. 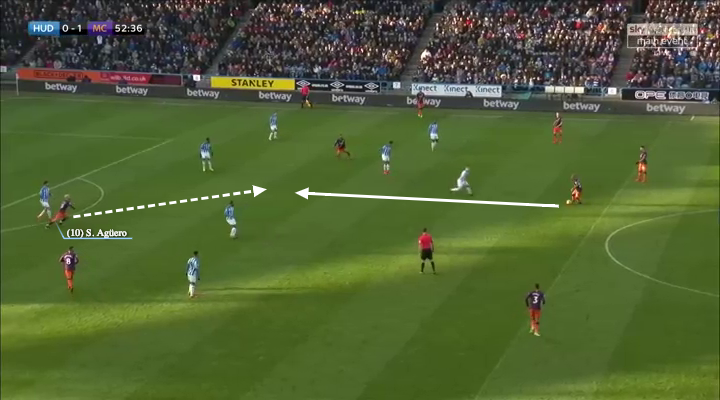 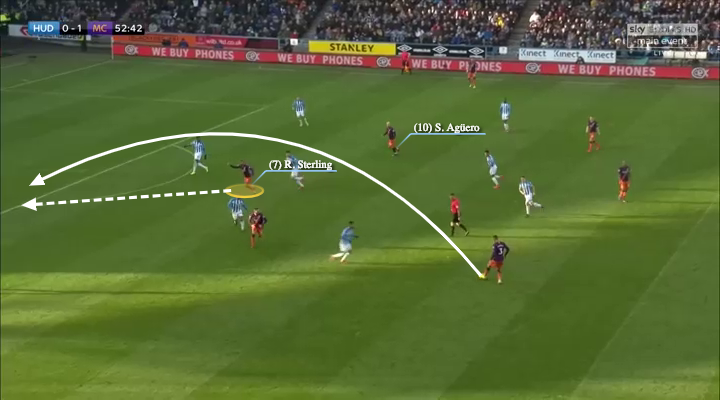 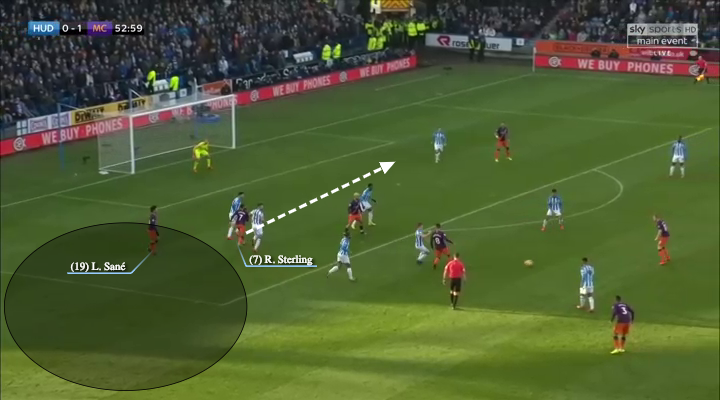 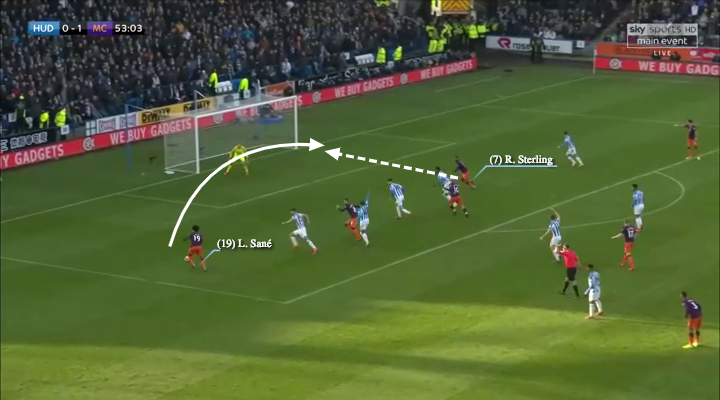 Just two minutes later, a good combination between Agüero and Sane ended up with the German scoring the third and last goal, putting the final 3-0 in favour of Manchester City.

Afterwards, Guardiola tried several substitutions looking to continue testing for a Fernandinho replacement. First he tried Gündogan and then Delph as centre-midfielders, but the results have been unconvincing so far. While Gündogan adds a lot of value in the build-up phase, he lacks the physical strength and persistence of Fernandinho. Delph, meanwhile, is closer to the Brazilian on the defensive side, but doesn’t add differentiation while attacking.

Guardiola also tried Bernardo Silva as right-winger, but the Portuguese player tends to get involved in the build-up phase reducing the offensive strength on that wing. Kevin de Bruyne completed again 90 minutes, but it was not his best game, as he was mentally slower and lacked the precision and leadership he is used to show.

Meanwhile, Huddersfield stepped up in the last 15 minutes and had a couple of good chances to score, mainly in the feet of Mounie and using the left wing, but he lacked composure to finish the situation correctly. Manchester City’s victory was never under threat.

The fight at the top continues as key games approach

After several games where we criticized their defensive performance, Manchester City has had four games in a row with a clean sheet. Their offensive production is out of question, they are the team with most goals scored in the top leagues in Europe, but they need to improve and cement their defensive strength in order to be able to fight for all prizes, especially their biggest dream: the Champions League.

If you love tactical analysis, then you’ll love the digital magazines from totalfootballanalysis.com – a guaranteed 100+ pages of pure tactical analysis covering topics from the Premier League, Serie A, La Liga, Bundesliga and many, many more. Buy your copy of the January issue for just ₤4.99 here, or even better sign up for a ₤50 annual membership (12 monthly issues plus the annual review) right here.