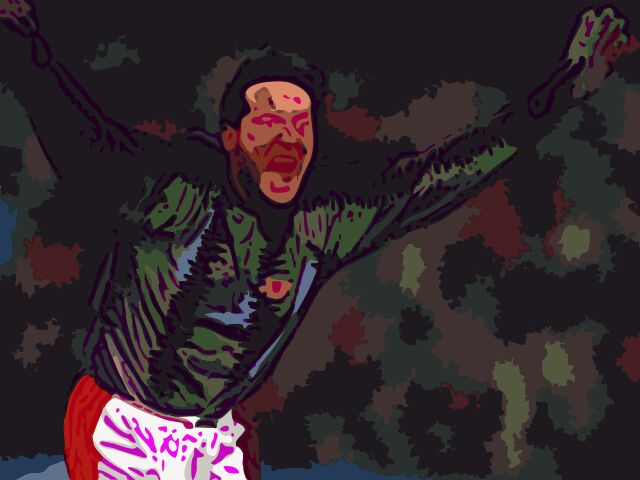 As a kid, I was a goalkeeper. I still don’t really know how or why other than my slightly older cousin Rich was very, very good and when sitting in the car ahead of my first-ever game for Heath End Wanderers U9s, the manager asked me what position I played and I blurted out “goalkeeper” for some unknown reason.

It is highly probable that on some level, I sussed that not many kids wanted to play in goal and every team needed one – therefore I was very likely to play every week.

This was the 1987/88 season – and by the end of that season I was a fully-fledged Luton Town fan. And as a budding goalkeeper who now supported the Hatters, it made perfect sense that I started to follow our goalie, Les Sealey.

My earliest memories of Sealey were probably exactly as people would remember him – football wasn’t massively televised at this point, so I would have seen some highlights, footage from Saves Galore and what I read in the press.

With that knowledge base, I knew Sealey was good. But I also knew he was loud – very, very loud.

My first season as a goalkeeper would have been well underway by the time Luton and Sealey were important to me. I know I started supporting them after they were winning on TV in the Littlewoods Cup semi-final – quite possibly the first time I’d seen Sealey play, but then as a football badger already at that point, there is every chance I was aware of every goalie in Division One.

I suspect I was already quite verbal with my defence in my first season – I do remember making a conscious decision at some point early that rather than sitting around making mud-pies in a game we were dominating and I’d probably not touch the ball that often, that I could start to watch what was happening and why and make sure my defence was always alert.

This could well be a reason why Sealey stood out to me too – he did not give Steve Foster and the others a single moment’s rest.

He was by far and away my favourite at a young age – though, credit to Andy Dibble, he probably found himself as my second favourite after that penalty save at Wembley which won us the Littlewoods Cup.

When Sealey moved on loan to Manchester United I know I was disappointed but also excited – after all, United were much, much bigger than Luton and when he was called into the FA Cup Final replay side in 1990, I was bizarrely happy.

And then when he signed for them, well I am not too proud to admit that I started following United a lot more closely than I had before – and even got his goalkeeper jersey for Christmas, probably in 1990. It was the really cool green and black hazard-style striped one that they had. I loved it.

Les, as we’ll go on to mention in this piece I am sure, was a bit of a cultural architect at Old Trafford – his demanding style certainly fitted what Alex Ferguson needed as he slowly turned the oil-tanker round. And Sealey, without doubt, paved the way for another obsessive, loud, obnoxious personality to take over from him – Peter Schmeichel really was just a much better version of Les in reality.

I celebrated him winning the Cup Winners’ Cup in 1991. I was amazed at his bravery staying on the pitch after the Wembley injury in the Rumbelows Cup Final against Sheffield Wednesday. I was grateful for his example from a distance as I developed into a decent-ish but loud goalkeeper in the local area.

Les Sealey, you were one of a kind.

Let’s look back on your career.

Sealey was born in East London, Bethnal Green – one of many talented players to come out of East London but not start their life at West Ham.

He was an apprentice at Coventry City of all places, making his debut as a 19-year-old in 1977. Coventry drew 1-1 with QPR that day and Sealey went on to represent them 153 times before David Pleat paid £100,000 to take him to Luton Town.

Sealey was a cult hero at Kenilworth Road – playing 207 times. Unfortunately, he missed out on the club’s finest moment – the 1988 Littlewoods Cup Final win over Arsenal. Sealey had reported injured the morning of the game and his place went to his understudy, Andy Dibble.

Dibble, famously, was superb on the day – keeping Arsenal at bay several times and then saving Nigel Winterburn’s penalty that would have probably meant victory for the Gunners. Luton recovered and went on to win 3-2.

The Hatters were back at Wembley again the following season, playing Brian Clough’s Nottingham Forest in the Littlewoods Cup Final. Sealey started but had what was considered to be his worst performance in a Luton shirt.

He conceded a penalty, cleaning out Steve Hodge and Nigel Clough scored – Forest went on to win 3-1.

He was dropped for Luton’s next Division One game, replaced by Alec Chamberlain.

In December 1989, Alex Ferguson needed an experienced backup to his out-of-form number one, Jim Leighton. Sealey moved to Old Trafford on loan and after Leighton’s dismal performance in the 1990 FA Cup Final, a 3-3 draw with Crystal Palace, was called up for the replay.

United won 1-0 – Sealey had an FA Cup winner’s medal out of nowhere. A mark of the man, he offered his medal to Leighton – who refused – but the FA eventually saw to it that both men received one.

Fergie had seen enough and signed him permanently that summer. In the 90/91 season, Sealey was Man United’s first-choice keeper and as mentioned, played in the League Cup Final and then was part of the team that beat Barcelona 2-1 in the European Cup Winners’ Cup Final.

Hoping he’d done enough for a two-year deal, Sealey was offered just one by Ferguson so he chose to leave Old Trafford.

The next destination was Villa Park – he was Aston Villa’s number one for the start of the 91/92 season but soon lost his place to Nigel Spink.

Incredibly, a return to United came about – and Sealey went back to Old Trafford as Schmeichel’s backup. He only played twice, once as a sub in the FA Cup quarter-final after big Pete got sent off and then in the League Cup Final, a 3-1 defeat to Aston Villa.

Short spells with Blackpool, West Ham and Leyton Orient would follow and Sealey was still registered as a player after his 42nd birthday.

Tragically, he died of a heart attack at 43 – the same age as I am now.

What did they say about him?

“Les was a very quiet, unassuming man… No, he was exactly the same as you saw him on the pitch! A larger than life figure with a great sense of humour who loved his football and worked hard. He realised he had a marvellous opportunity coming to United and he made the most of it.”

“I took a gamble replacing Jim Leighton, but I knew Les had the character and personality to play on the big stage.”

“Every day Les was here was like a birthday for him because he came out of nowhere to play in the cup final. He was always saying, ‘I’m happy to be here’ and the players took to him because of his attitude. Les was thrust straight into it but his off-the-cuff personality allowed him to adjust quite quickly. He could be relaxed or hyper, loud and funny or sometimes just a pain! With Les, what you saw was what you got.”

“His knee was cut right down to the bone, but he didn’t want to go off because he was desperate to play in the Cup-Winners’ Cup final a few weeks later. He had a big, big heart.”

“Well all i can say is what a fantastic guy a class goalkeeper who i learnt so much from. He helped me so much during my time at the Hatters”