Scotland came into this match with a high confidence level after winning the historic match against Serbia last week. They were first in the UEFA Nations League’s Group B2, with 10 points ahead of the kick-off. The Scots needed one win from remaining two matches to secure top spot in the group and promote themselves to the top tier of the Nations League.

However, it was Slovakia that secured the victory when a first-half goal from Ján Greguš gave them a 1-0 win in their home stadium. The Slovaks ended Scotland’s nine-match unbeaten run and prevented them a promotion to the top league with one match to spare. The victory was more impressive as they only won just one point from four games before coming into this match.

In this tactical analysis, we will study the prominent aspects from both tactics in this match in terms of in and out of possession. This analysis will also analyse with more details about Tierney’s contribution to Scotland’s attacking phase and why should he received the recognition in this match.

Before we delve into this tactical analysis, we will look at both teams’ formations and starting line-ups in this game.

Slovakia caretaker head coach Stefan Tarkovic went into this game by implementing 4-3-2-1 formation, with four changes from their play-off final against Nothern Ireland. Marek Rodák continued his role as a goalkeeper for the home side, with Inter’s Milan Škriniar and Lubomír Šatka stood in front of him. Róbert Mazáň and Peter Pekarík started at left-back and right-back respectively. The centre-midfielders consisted of Ján Greguš and Juraj Kucka, with Patrik Hrošovský taking on the defensive midfielder role. The attacking midfielders were Ondrej Duda and Marek Hamšík, with Michal Ďuriš getting the nod as a lone centre-forward.

Meanwhile, Steve Clarke applied a three centre-backs in his 3-4-1-2 formation. The visitors made eight changes, with the gaffer recalled Craig Gordon into this line-up as a goalie. Liverpool’s Andy Robertson was a doubt into this match, so Andy Considine returned in defence with Arsenal star Kieran Tierney shifted out to the left wing-back position. Liam Cooper, Scott McKenna, and Liam Palmer completed the defence for the Scots. The two pivots were John McGinn and Kenny McLean, with Stuart Armstrong playing as attacking midfielder. Oliver McBurnie returned to the line-up to replace suspended Lyndon Dykes, with Celtic’s Ryan Christie as his partner in attack.

The Slovaks came into this match with a defensive and cautious mindset during the build-up phase. They preferred to win the ball inside their own third and launched an attack when the opportunity arises within Scotland’s half. The numbers tell us that Slovakia had only eight shots throughout the match, even though they attacked the opposition half 29 times.

From the pass map above, we can observe that Slovakia’s midfielders played a big role to build their attacking in the centre of the pitch. The structure of their build-up was similar to the starting formation, as they wanted to ensure both attacking midfielders, Hamšík (17) and Duda (8) receive enough supply from the back. Greguš (6) and Kucka (19) were acted as decoys to create spaces for the aforementioned players in the centre of the pitch. In certain occasions, they also acted as the connector between the defenders and forwards upfront.

Slovakia’s build-up tactics can be seen in the image below. Slovakian defenders just won the possession from a good interception in the middle of the pitch. They restarted their attack by passing back to Šatka to take time for the midfielders to get into the right place. The three centre-midfielders dragged their markers out of their position to create big space in the centre pitch. Duda and Hamšík positioned themselves in this area before one of them received the ball from the defender.

This was the initial build-up from Slovakia before they progressed into the final third. To create a space in the middle of the pitch was not an easy task for them as they needed to wait patiently inside their own third before passing the ball to one of the attacking midfielders. Slovakia defenders had to pass the ball between them and waited for Scotland to press them inside their defensive half.

There were also certain cases where Scotland did not press the midfielders as they wanted to cover Duda and Hamšík from getting the ball in the middle of the field. When this scenario happened, Slovakia will use Greguš or Kucka’s availability to carry the ball into the final third. Their approach was still the same; both midfielders will hold the ball before releasing it to other midfielders once they were free.

In the above analysis, we see that both Hamšík and Duda already being covered by Scotland players. Greguš cannot pass to both players as the opponents can easily anticipate the pass. He held the ball and scanned the field to find if there were any teammates available to carry the ball. Kucka already made his run into space, so Minnesota midfielder passed the ball to his teammate, who already free from any markers.

Once they were in the final third, they applied the same approach when finding the opportunity to break their opponent’s defence. They tended to stop and think first before deciding on the next course of attacks. This behaviour in the final phase of attacks affect the team’s attacking movement as Scotland could read their movement easily. They had lost the ball 105 times throughout the match, with half of the numbers coming from their forwards.

Despite the fact that Tarkovic’s men won this game with only one goal in full 90 minutes, they had a hard time to create quality chances as Scotland had blocked and restricted Slovakia’s creativity inside the visitor’s penalty area. They created 0.21 xG (expected goals) compared to the Scots, which was 1.36 xG. Slovakia had attempted a total of eight shots, with five shots testing Scotland’s goalkeeper. One of the reasons why Slovakia’s xG was lower than their actual goal, was because of all of the shots they attempted were from outside of the penalty box. The shot map below illustrates Slovakia’s shots in this match.

Scotland were pretty straightforward when it came to defending their own territory. They started to defend when the opponents built from the back. Their defensive structure also depended on Slovakia’s transition from defence to attack. When Slovakia played patiently at the back, they deployed a 4-3-3 formation, with the forwards put pressure on Slovakia defenders and the midfielders mark Slovakia midfielders. This example can be seen in the image below.

In the above analysis, the ball was carried by one of the Slovakian centre-backs in the initial build-up. McBurnie and Christie were given a task to pressure and man-mark the centre-backs, while Armstrong moved upwards to block any pass to the goalkeeper. McLean and McGinn man-marked the midfielders from receiving the ball at the centre of the pitch. Since the ball carrier cannot build the attack through the middle, he passed the ball to the right-back, who was being marked by Tierney. When the right-back received the ball, most of the times Tierney succeed to stop the attack and Slovakia needed to switch the play to another side.

However, when the Slovaks triumphed to progress the ball into the final third, their structure became different. They wanted more robustness at the outside of their own penalty box, so they created a low and compact block with five defenders covered the whole space near to the penalty box. The objective of this structure was to reduce any horizontal gaps between each defender that can be capitalised by Slovakia when they are looking for penetrative passes.

This time, Armstrong had to join the midfielders to close the vertical gap and space between the defensive line and midfield line. So, their structure inside the defensive third became 5-3-2. The structure can be observed in the image below.

When they were in their own defensive third, Scotland tended to sit back and absorbed the pressure from Slovakia’s attackers. They did not man-mark or press any Slovakians as they had to ensure they were in the right position to block any passes or shots. Other than that, they also wanted to steer Slovakia’s play into the wide channel. In terms of defensive situations, Scotland were better when they defended at the flanks. Scotland’s full-backs have high tenacity and sheer strength to defend the wider areas.

Scotland had won the ground duels mostly at the flanks, thanks to the tactics deployed by Clarke. They had won 73% of the duels and recoveries at the wide channel, with Cooper and Tierney winning the duels 22 times out of 64 winning duels. Their defensive tactics at the flanks proved influential in restricting Slovakia from creating chances as the Slovaks only attempted seven unsuccessful crosses, with zero successful crosses and seven key passes for the whole 90 minutes.

It is an undebatable issue when finding the man-of-the-match in this game as there was only one obvious choice that made things work for his respective team. The player played an integral role in his manager’s tactics. Other than that, he contributed in many ways during attacks and defensive phase. The player who performed impressively and above par in this match is Scotland’s left-back, Kieran Tierney.

The Arsenal left-back was a constant threat to Slovakia for the whole match with his lung-bursting runs down the flank. He was a crucial piece in Scotland’s build-up and attacking phase as most of the attacks came from his side. Tierney’s role (6) can be analysed in the pass map below to determine his actions in Clarke’s tactics.

From the above chart, we can see that Tierney’s position was in line with the forwards. His circle also one of the biggest as it shows he received many touches compared to other Scotland players. His line stroke was also the thickest as he received more passes and attempted more passes to the other players. Most of the passes went through him before he carried the ball into the final third and put the crosses into Slovakia’s 18-yard box.

One of the examples of Tierney’s action in the final third can be seen in the above image. He received the ball from Christie before proceed to carry into at the edge of the box. At the left flank, Pekarík was readied to tackle him to prevent him from delivering a cross. Tierney used his slick movement to get past the right-back and deliver a whipping cross towards McLean. McLean successfully headed the ball in the six-yard box, but Rodák denied the equalizer with an unbelievable save.

Tierney had been hardworking throughout the match to create chances and defend his own flank. His tenacity and stamina gave Scotland another aspiration for them to keep going in this match. Tierney had done so much for Scotland that the only way for the host could stop the 23-year old was by fouling him.

To conclude this analysis, patience had provided convenience for Tarkovic’s men as they succeeded in frustrating the Scots and getting awarded for a winning goal through their composure build-up and a little bit of luck. Clarke will also take heart from a spectacular display from a second-string line-up that suggests he has a degree of strength in depth. Credit should be given to Arsenal man as he proved to be a headache for his coach to decide who will fill the left-back position between Tierney and Robertson in the future games. 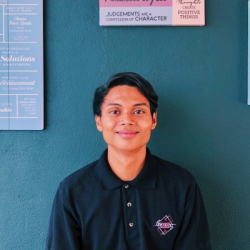 Follow me
Aliff Mustaqim
Aliff Mustaqim is a data scientist in an IT company and a volunteer in analysing data in Malaysian football. An avid Liverpool fan since 5 years old.

Follow me
Latest posts by Aliff Mustaqim (see all)