Italy was held to a 0-0 draw when they visited Poland on Sunday. Roberto Mancini’s Italy wasted many chances to take a commanding lead at top of the Group A1 in the UEFA Nations League. Italy posed a greater threat and remained the dominant force throughout the match. Poland tightened up in the second half. It became difficult for Italy to break them down. The first half was very entertaining, and Italy enjoyed a positive start as they had several chances to take the lead in the match. Marco Verratti kept things in control for the Italians with a commanding performance in the midfield. Poland went close a few times in the second half but couldn’t convert their chances or the danger was cleared away by the Italian defenders at the last moment. It was a rare quiet day for Robert Lewandowski as he could not inspire his national team to a victory. He failed to register a single shot; the service given to him was not great as the team was playing with 11 men behind the ball most of the time.

In this tactical analysis, we will have a look at how Italy impressed with their all-round style of play but lacked precision. In this analysis, we will also see how Poland kept a clean sheet against one of the best nations in the world.

Jerzy Brzeczek opted for his usual 4-2-3-1 formation and made six changes from their last win against Bosnia. Former Arsenal goalkeeper Łukasz Fabiański started in goal. There were two changes made in the defence line, Sebastian Walkiewicz and Bartosz Bereszyński came in for Jan Bednarek and Maciej Rybus, respectively. Brzeczek made four in the midfield, Jakub Moder started along with Grzegorz Krychowiak as the double pivot. Former Championship midfielder Mateusz Klich replaced Piotr Zieliński as the “no. 10”. While Kamil Jóźwiak and Sebastian Szymański started on the left and right flanks, respectively. Lewandowski made a return to the starting lineup in place of Arkadiusz Milik. He led the front line as a lone centre-forward.

Former Manchester City manager Mancini made seven changes to his side and deployed his preferred 4-3-3 formation. As usual, Gianluigi Donnarumma started in between the posts. Mancini chose Leonardo Bonucci to captain the side in place of Giorgio Chiellini, who made his way to the bench. Mancini made three changes to the defence line, Alessandro Florenzi started at right-back, Francesco Acerbi partnered Bonucci in the centre while Emerson came in for Leonardo Spinazzola at left-back. In midfield, Marco Verratti and Nicolò Barella partnered Jorginho. Mancini revamped the front three, Andrea Belotti led the line, Federico Chiesa and Luca Pellegrini started on the right and left flank, respectively.

Since joining in 2018, Mancini has only made Italy stronger. Their defence is stronger than ever but is limited offensively. Mancini has used an attack-minded 4-3-3 system over the past two years. We will now have a look at Italy’s build-up play and attacking tactics implemented by Mancini in this match.

Mancini’s back four comprised Florenzi, Bonucci, Acerbi and Emerson. The front three comprises  Belotti, Pellegrini and Chiesa, positioned very far from each other in which Chiesa and Pellegrini operated as wingers, touching the sideline. The trio of Jorginho, Veratti and Barella made up a very strong midfield for Italy which compensated for the lack of great strikers. The likes of Lorenzo Insigne, Ciro Immobile, and Belotti have been too inconsistent. Mancini has always depended on his midfield to propel his team. He has integrated this trio of technical players to his side and changed his tactics. The team now plays a more fluid and possession-based football to progress up the field collectively.

As you can see here, Jorginho and Veratti are operating in front of their defence line as a double pivot. Jorginho is the “metronome” of this Italian side, and Veratti helps in the build-up by playing short and long passes. Thus, along with Barella, these two midfielders create rotations in the midfield. Barella plays a more attacking role as he has the license to move forward and operate in the half-space between the opposition’s defence and midfield. The double pivot of Veratti and Jorginho help in creating triangles in the midfield to provide a numerical superiority and move the ball up. The movement of both these players are very fluid and not automatized. Hence, which allows them to make the best situational decision possible.

While in possession of the ball, Italy formed a 3-2-4-1 structure. Florenzi tucked into the defence line as a right centre-back along with Bonucci and Acerbi, forming a back three. This gave the Italians stability at back and allowed one defender to step out of the defence line and win possession aggressively when opposition team is coming at them on the counter. Still, they would have two defenders covering the space in behind. Veratti and Jorginho remained as the double pivot in this structure while Emerson moved up and operated as left midfielder. Thus, Pellegrini operated in the half-space between opposition’s defence and midfield along with Barella. Hence, Italy could create overloads by using Jorginho and Veratti as the two 6s and, Pellegrini and Barella as the two 10s in between the lines. This gave the back three more support whenever the ball was turned over. Also, allowing them to bring the ball forward to play penetrating passes to the players in between the lines.

Italy used a slow build-up play from deeper positions. The Italian defenders would bring the ball forward carefully and methodically. Thus, Poland tried to overload that side where Italy brought out the ball from. Hence, this allowed the Italian defenders to play long diagonal balls to their wide midfielders, Emerson and Chiesa to bombard the space behind the opposition’s full backs. Similar to how you can see in the above image, Chiesa plays a long diagonal ball in the space behind Kedziora into the path of Emerson.

Veratti was heavily involved in the match and helped to switch the ball to the opposite flank by making use of his excellent technical ability. He completed a game high 9 long passes at an accuracy of 82%. As you can see in the above picture, Poland has shuffled to the right side. Immediately, Veratti plays a long diagonal pass over the head of Poland’s left midfielder Kamil Grosicki, who’s literally in the centre. Veratti easily finds Chiesa, who is in open space with the ball on their right flank. Thus, this left Chiesa 1 v 1 with the opposition left-back. Such long diagonal passes forced Poland to shuffle from one side to another. But they worked hard and maintained their defensive resilience.

As we know it was all square at Gdansk on Sunday, Poland kept the Italians quiet. Having won only one match in their previous seven matches, they hoped that the return of Lewandowski will boost their chances of winning this match. We will analyze how Brzeczek used the 4-1-4-1 system.

Italy was the dominant side throughout the match thus, Poland had only 41% possession of the ball. As you can see here, in the defensive phase Poland defended in a 4-1-4-1 system. This structure comprises a back four, a holding midfielder, four attacking midfielders and a centre-forward. Poland played with a typical flat back four and defended as a unit. Italy played with only Belotti at the top, so it was Glik or Walukiewicz marking him. Poland was not aggressive while pressing and preferred to let Italy come till the middle third. This allowed the Italian defenders to have more time on the ball and come out of the defence line. Poland used a man-oriented zonal marking system which meant that the players were covering their respective zones and once any opposition player entered the middle third, Poland marked his passing options man-man.

The four attacking midfielders’s task in the centre was to protect the central lanes collectively and not allow Italy to play through the middle. Brzeczek deployed the attacking midfielders to overload the midfield and to break through on the transition when they would win the ball. While defending, Brzeczek used Moder as a holding midfielder to cover the space in front of the defence and behind the four attacking midfielders. He was also tasked to cut off the supply to Barella, who was given the license to roam in front of their front four. Lewandowski played as a lone striker in between the opposition centre-backs to not allow them to play passes in between them.

Italy played well and got some big opportunities in both halves to take the lead. They could have scored a couple of goals and I am sure it is a result Italy would not have wanted. Mancini’s team had only 1 shot on target out of the 12 they attempted We will now have a look at how Italy failed to find the target even from excellent positions.

In the 10th minute, Barella initiated the move by playing a one-two pass with Pellegrini. While Pellegrini runs towards the centre of the box after a nice link-up play, Barella chips the ball first time onto his head. Pellegrini gets the first effort on goal and heads it just wide to the left.

In the very next minute, Italy gets a huge chance. Jorginho intercepts the ball in the middle third and passes to Veratti. Then Pellegrini and Veratti work the ball onto the left flank to the feet of Belotti, who is unmarked. Immediately, Belotti puts in a low cross and finds Chiesa at the back post to open their account, but Chiesa’s right footed shot from close range blazes over the bar.

Once again, Italy in the 34th minute has a chance to score a goal. Barella moves to the right channel and allows Chiesa to get into the box. He crosses the ball into the box, Belotti cleverly steps over it as Pellegrini was in a better position to score right behind him. The ball reaches the feet of Pellegrini and gets a very weak shot as Kedziora tries to hold him off. Pellegrini could not get his feet sorted, and he wasted the chance.

Emerson got the biggest opportunity to score a goal for Italy in the 64th minute. As you can see here, Chiesa manages to work the ball into the box from the right flank after being chased by two opposition defenders. He crosses the ball into the centre and finds the onrushing Emerson, who heads the ball inches wide of the post from the six-yard box.

A draw for Poland looks like a good result, given that the Italians had more chances to score. Poland tried to build their attack around Lewandowski, but Brzeczek’s tactics didn’t work out this time. Italy struggled to create chances as they were lacking the final ball and some sharpness in attack. They managed only 1 shot on target despite enjoying 59% of the possession. The Italian’s unbeaten run extended to 18 matches. They stay on top of the table with one point more than Poland and Netherlands and three more than Bosnia. 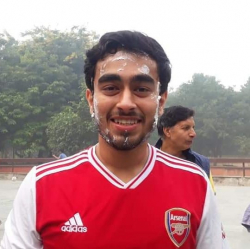