India stunned the Asian Cup champions Qatar when they played out a 0-0 draw at the Jassim Bin Hammad Stadium in Doha on 10th of September, 2019. This draw earned India their much-awaited first point in the joint World Cup 2022 and Asia Cup 2023 qualifiers after the Blue tigers had been beaten by a late goal in their previous encounter with Oman at home. It required a mammoth Man of the Match performance from the Indian Captain for the day and their number one in goal – Gurpreet Singh Sandhu who made a total of 11 saves throughout the course of the game.

This tactical analysis will consider how Igor Stimac’s Indian team managed to grind out a point by defending in low blocks of four against Felix Sanchez’s Qatar who threw the kitchen sink at the Indians only to be denied every time, with the Spanish and Barcelona legend Xavi Hernandez watching on from the stands as the Qataris felt short of expectations.

India lined up without their talisman Sunil Chhetri who was out with illness and Ashique Kuruniyan with an injury. Brandon Fernandes and Subhashish Bose dropped out for Nikhil Poojari and Mandar Rao Desai. Rowlin Borges sat in front of the defence as the defensive midfielder linking play and sitting at the base of the diamond in midfield.

Udanta Singh and Manvir Singh started up front with Udanta holding the byline and stretching the pitch as much as possible with Manvir playing a much central role. Gurpreet Singh Sandhu who also shares the dressing room with Chhetri at Bengaluru FC in the Indian Super League was given the armband in the absence of Chhetri and it is fair to say he lived up to his billing.

Qatar started the game with their usual 4-3-3 system with the captain Al Haidos on the left-wing, Yousuf Abdurisag on the right with Almoez Ali playing through the centre. Abdulhaziz acted as the link between defence and attack and most of Qatar’s offensive play was through him. Madibo and Khoukhi were well advanced and Qatar had very less threat coming from the other side. Both the fullbacks advanced to the final third of the pitch on multiple occasions and Madibo dropped deep forming a three-man backline while the fullbacks provided width to Qatar’s attacks.

India was ranked 47 places below Qatar at the time of the match arrived in Doha with Igor Stimac having a pre-set plan to shut out the free-flowing and goal-scoring football Felix Sanchez’s Qatar had played throughout the year. During the course of this analysis, we see that India started out to sit deep and defend from the very first minute against the reigning Asian champions. They were well drilled to sit into two blocks of four and absorb all the pressure Qatar were to throw at them. Here we see how tightly compact are the four Indians in the backline determined to not allow an inch of space through the centre. Sandesh Jhingan was instrumental at the back being the most experienced international in the back four, he was the one keeping the backline in shape and knit together through his loud vocal commands and was often seen shouting at his teammates and pushing them on to make challenges and blocks. Qatar had 75% of possession and almost all of it in India’s half but were unable to break the deadlock thanks to some heroic defending and a man of the match display by the Indian captain Gurpreet Singh Sandhu in goal who pulled of an astonishing display with a total of 13 saves earring India their first point in the joint qualification for World Cup 2022 and Asia Cup 2023. Rowlin Borges sat at the base of the diamond in midfield which switched to a midfield four on many occasions to deny the Qataris entry through the centre of the pitch forcing them into the wide areas and into shots from distance. Sandesh Jhingan and Adil Khan at the centre of the defence had a decent game and made three important blocks to shots that were goal bound. Sahal Abdul Samad, Anirudh Thapa and Nikhil Poojari had to be alert for the whole of 90 minutes and keep the defensive midfield of India in shape to see out the waves of Qatari attack, which they did at the end of the day. The three in midfield kept their shape all throughout the 90 minutes and played like they had a point to prove. All of the four midfielders often drifted wide to help out their fullbacks and even rushed out to clear loose balls after Gurpreet had made a few decent saves from long-range efforts.

The Indian midfield was keen in helping out the wing-backs in Rahul Bheke and Mandar Rao Desai against the much more technically sound players in Al Haidos and Yousuf Abdurisag. The Indian midfield of Nikhil Poojari on the left and Thapa on the right side pressed the Qatari wingers whenever they had the chance and the Qataris were not able to find themselves isolated with the Indian fullbacks to take them on and beat them one on one. The Indian wingers had to track back and ensure their counterparts were not left alone with their fullbacks to take advantage of their better technical ability and play the numbers game against them. Not even on one occasion throughout the match did India leave any one of their defenders alone with a Qatari attacker, hence making sure that the clear cut chances from inside the 18-yard box were not completely unchallenged and Gurpreet stepped up to his reputation whenever called upon.

Qatar’s game plan tactics were simple, to play through the Indian midfield and defence and get as many shooting opportunities from around the 18-yard box as possible. Qatar had a total of 27 shots. But, as shown in the above instance, Al Haidos the Qatari captain who plays for Al Sadd in Qatar alongside Santi Cazorla, decided to take a shot from a fair 30 yards out which was easily dealt with by the charismatic and vocal Gurpreet Singh Sandhu in the Indian goal, whereas releasing the Qatari left-back Miguel in the wide areas where the space was ample and flooding the box for crosses might have helped Qatar create much more Ariel threat. Out of 13 shots that Qatar took 0 were headers on target. This was the story for the rest of the match, the Qataris shooting whenever possible and it was either one of the CB’s coming in to block or was the massive Indian Captain Gurpreet Singh Sandhu acting as the last line of defence. Had Felix Sanchez set out his team differently in the second half the story of the match would have been different, but having dominated the first half completely the Qatar national team believed that they could break through the big hands of the Indian custodian, but it wasn’t meant to be as the Indian defence held firm and kept retaining their shape after the every attacking move that Qatar tried to develop.

In another example from the 85 minute, AlMoez Ali was in a good position to pass it on the byline and get in the box for a cross. He could have also attempted to cross the ball himself, as shown by the yellow arrows on the screen. But here we have a look at the number of Indian players in and around the box, they were into low blocks of four, and even as a back five at times to prevent any space in and around the box, which made Qatar decide against taking the crossing route to goal. Here in this example AlMoez Ali decided to have a go and struck a sweet left-foot strike that stung the palms of Gurpreet who could only palm it away to Yusuf who struck the woodwork and just like that Qatar’s biggest chance of the night went begging. One can definitely argue that if Qatar had decided to flood the box with more players and put in more crosses from wider angles they would have caused much more trouble to the Indian defence.

India’s tactical game plan was to play on counter-attack from the very beginning was not much of a surprise to anyone, considering the fact that they were coming up against the Asian champions at their home ground. Only Brazil, Columbia and Argentina were able to stop Qatar from scoring in 2019 so Indians were set out to counter at whatever opportunity. Here in the above example the ball was cleared and it found a way to Manvir Singh who’s first touch was decent but he could not bring it under his control, nevertheless as soon as the Indian midfielders say this as a chance to counter they were on the move. One can see how Udanta Singh on top of the frame, Thapa, Abdul Samad and Poojari had started sprinting upfield as soon as they sensed an opportunity could be developing. Although Manvir lost the ball and Gurpreet had to pull off an amazing save with his right hand stretched from the resulting sequence of play from AlMoez Ali, this shows that the Indians were not just there to defend for their lives but they were looking to exploit and test the Qataris on the counter.

The above frame captures India’s only corner of the game which ended with Sahal Abdul Samad shooting just narrowly wide with his left boot. The Indian team inside the box moved towards the near post area to drag the Qatari defenders with them and create space on the far post area. A very simple tactic but deployed very smartly by the Indians as it required the whole team’s contribution. The ball was lobbed into the far post area by Anirudh Thapa and Sahal Samad (not in the frame) had a clear strike to the goal, but he could not test Al Sheeb in the Qatar goal. This shows that the Indian team had practised on getting the maximum out of their set play opportunities.

Although the Qataris dominated the game to large extent and had 27 attempts on goal to India’s 2 attempts, the game will be fondly remembered by the Indians fans as the day when their goalkeeper Gurpreet Singh Sandhu put out an absolutely mind-blowing performance and keep a clean sheet against the champions of the Asian continent to really prove his worth to his county. Whereas for the Qatar fans it was a story of two points dropped rather than a point won. Indians, on the other hand, will believe that this game is the sign of things to come for the rest of the FIFA World Cup 2022 qualifiers and will give them hope that their team can qualify to the Asian Cup in 2023 if not the World cup in 2022. 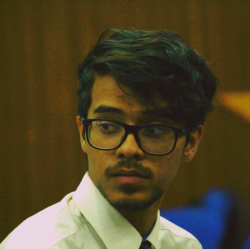 Anand Vardhan
Anand is currently pursuing his undergrad studies in Civil Engineering, he holds a keen interest in various sports and other general affairs. He is usually found reading and discussing unorthodox topics on the internet.
Hit him up on Instagram for an in-depth conversation @novardhandont