Manchester City hosted Leicester City at the Etihad Stadium on Sunday afternoon in a penalty ridden game. The hosts came into the game off of a comfortable 3-1 win last weekend, looking to continue a positive start to their Premier League campaign. Meanwhile, Leicester City came to the Etihad looking to make it three wins in three, and go top of the table with a win against the citizens. This tactical analysis will examine both sides and explain how Jamie Vardy and Leicester City were able to expose the mistake-ridden backline of Manchester City.

Both sides have sustained injuries already early into the season with the noticeable absences of French centre back Aymeric Laporte and striker Gabriel Jesus for Man City. Meanwhile, Leicester City recently found out their key man Wilfred Ndidi could be out for up to 12 weeks with an abductor injury. Other absences included right-back Ricardo Pereira and recently signed Turkish winger Cengiz Ünder.

Man City’s 4-2-3-1 formation allowed for the front four to interchange positions freely. Also, with Fernandinho and Rodri at the double-pivot, fullbacks Walker and Mendy could push forward whilst City had possession. Leicester sat deep in a 5-4-1 formation. A back 3 of Daniel Amarerty, Çağlar Söyüncü, and the former Manchester United man Jonny Evans. They would look for the outlet of Harvey Barnes out-wide, in the space left unoccupied by the advanced Kyle Walker, or balls into space for the relentless Jamie Vardy.

A match of two halves

Manchester City dominated possession for the first half with control of the ball in the Leicester City half for the first 35 minutes. Kevin De Bruyne, Phil Foden, Riyad Mahrez, and Raheem Sterling caused problems early on with their constant interchange of positions in the final third. These tactics of allowing his front four to roam freely looked to be a possible outlet for the opening goal. The first goal, however, would come from a set-piece that was cleared initially by Leicester’s wingback James Justin, but the cleared header fell nicely for Mahrez. He was in the right place at the right time to drill a right-footed shot into the net on the three-minute mark. City continued the pressure and thought that they had scored another goal from a brilliant set-piece cross from De Bruyne to Rodri. But the goal didn’t count as Rodri was offside. Shortly after this, the City dominance would drop and Leicester would find their breakthrough.

In the 35th minute, a break would occur lead by the left midfielder Harvey Barnes. The run by James Justin on the outside allowed Barnes to run inside directly at Eric Garcia. Barnes saw Vardy make a run across the young Spanish centre back, so he played the ball ahead of the striker. He was then be unnecessarily pulled down by the fullback Kyle Walker.

Vardy went on to convert the penalty by smashing the ball into the net shortly before halftime. The second half became Leicester’s game as they scored their second goal within the first 10 minutes of the first half, after winning the ball back in the Manchester City half. Nathan Ake tries to clear the ball out and it is headed back by the right-sided centre half Daniel Amartey, directly to Youri Tielemans. Tielemans then provides a give and go with Castagne, who made a brilliant run in behind the Man City backline. Castagne would then go on to provide a low cross for Vardy to flick into the back of the Ederson’s goal.

Leicester’s dominance would carry on throughout the half and another two penalty goals followed by a stroke of brilliance from recently returned James Maddison would bring five goals in for Leicester. A late headed goal brought one back for City, but it was too little too late. With the demolition finished, what exactly had caused this drop from a team that was so dominant in the first 35 minutes?

Manchester City was extremely vulnerable on the break throughout the game. The first  Leicester goal is a clear example of silly mistakes costing them. Kyle Walker’s careless pull-down was unnecessary and it hurt his team. Vardy’s second goal was formed by a smart run from Castange, who caught left-back Benjamin Mendy sleeping. The defensive line made by City was high as usual, but they must be aware of the break that can happen especially with the pace of Jamie Vardy.

The third goal by Leicester and the third for Jamie Vardy showed again that careless mistakes will cost them goals this season if they do not improve their defence. Whilst the ball played in behind by Barnes is a good one, Vardy is by no means with a scoring chance. That being said, Eric Garcia trips up Vardy once in the box. A very unnecessary move again by the blues backline as the Centre back Nathan Ake had come over to help the young centre back.

Leicester’s third penalty came when Tielemans played James Maddison into the box, and yet again City made an error. Benjamin Mendy carelessly pulled Maddison down inside the box. This gave Leicester their third penalty, which Tielemans scored to make it 5-2.

While you can credit Maddison with a smart run, it is the City defence who was at fault here. The focus on the opposition is lost here as Maddison ghosts past Sterling and occupies the space which Mendy should be covering, but he is too focused on the wing-back Castange. By the time Maddison gets the ball, it is too late for Mendy to get back. He then brings down Maddison for the penalty to be scored by Tielemans. It only takes a moment to take a look at the space around you to correct your positioning, but it is simply too late for City. It is here where they must improve if they are to look and challenge Liverpool for the title.

This analysis proved again that possession is not everything for your team to win matches. The Foxes were clinical and much sharper than their Manchester City counterparts, who will have many questions to ask themselves moving forward if they are seriously wanting to challenge for another title. This win was the first-ever time that a Pep Guardiola side let in five goals in-game, and he will surely try and correct this in their upcoming matches. For Leicester City, this was the third win in three matches and they currently sit top of the table. They will surely be looking to push forward with this massive win and look to try and have a fully consistent season this year, compared to when they trailed off at the restart last year. 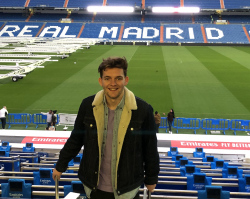 Calum Ferguson
Calum Ferguson is football tactic obsessive. As his football playing career never took off due his lack of skills and poor psychical fitness, he has decided to critique the game from a far as a football analyst. A Liverpool and Dundee United fan he enjoys both spectrums of football, excitement from one team, frustration from the other.
Twitter: @Ca111um
Email: Calumferguson19@gmail.com