The second quarter-final of the FIFA World Cup 2018 saw Belgium overcome Brazil in a hard-fought 2-1 victory, setting up the first semi-final of the competition against France.

The tie saw the pre-tournament favourites versus the competition’s top goal scorers, with an array of the world’s best attacking talent on show for both sides. Both teams were far from convincing in their last 16 ties to get to this stage. Brazil were 2-0 winners over a Mexican side who caused el Seleção numerous headaches with their dynamic counter-attacking ability. Whilst Belgium had to come back from 2-0 down to Japan to eventually win 3-2, requiring a 94th-minute winner from Nacer Chadli.

This tactical analysis will breakdown the strategies used by both sides and examine three main tactical areas in which the game was decided on. It will focus on Belgium’s offensive transitional play, the use of the two sides attacking trios and the contrasting styles of Belgium’s defensive organisation against Brazil’s unbalanced attack.

Brazil set up in a 4-3-3 formation both with and without the ball. There was only one change from their last 16 game, with Fernandinho replacing the suspended Casimero in the defensive midfield role. In possession, they were patient on the ball, looking to work the ball to their dangerous attacking players and use their 1 vs 1 skill to create chances. Out of possession Brazil looked to press high and stop Belgium from building through the thirds, by attaching their front three on to the three Belgian centre-halves.

Belgium line up in a 3-4-2-1 formation making two changes from their match against Japan. Chadli replaced Yannick Carrasco and Marouane Fellaini came in for Dries Mertens. The three at the back formation would change to a 4-3-3 out of possession, with Chadli coming in from left wing-back to central midfield and Jan Vertonghen shifting out to occupy the left-back slot. In possession, they were quite direct, looking to play forward to their attacking players as quickly as possible. Out of possession, they looked to stay compact as a defensive unit and apply constant pressure on Brazil, particularly in wide areas and their defensive half.

Belgium’s transitional play, particularly in the first half, was a huge part of their game plan and was executed perfectly. Roberto Martinez harked back to a counter-attacking plan he used successfully on several occasions as Everton manager, most notably in a 3-0 win against Arsenal in 2014. The plan included one player very familiar with it and who would play a pivotal role in this tie, Romelu Lukaku. Martinez gave license for him and Eden Hazard to stay high and wide when Belgium were defending deep.

This meant Brazil had to commit three players back to mark them, giving the Red Devils numerical superiority when defending. Brazil got sucked into Belgium’s deep low block, by committing their attacking players too high up the pitch and creating a huge gap between their attacking and defensive units. Belgium exploited this gap when winning the ball back, highlighting Brazil’s lack of anticipation for losing possession.

In the first half alone, Belgium successfully transitioned seven times from their defensive third to the final third in three passes or less. These counter attacks all used the same principles: driving centrally with the ball, having wide forward runners and committing defenders to the ball to give supporting runners more time and space on the ball.

This was on show as Belgium went 2-0 up on the half-hour mark. A cleared Brazilian corner found its way to Lukaku, who managed to hold the ball up, turn and drive at Brazil’s backline.

He committed five defenders around him, leaving Manchester City star De Bruyne and Thomas Meunier in acres of space. He then released the ball at the right moment to give De Bruyne enough time and space to pull off his trademark piledriver into the back of Alisson’s net, becoming the 100th player to score in the competition.

It was reminiscent of Chadli’s last minute winner against Japan and has been a hallmark of Belgium’s style that has got them to their joint furthest stage at a World Cup Finals.

A Game of Two Attacking Trios

In a game with so much attacking talent on show, it’s not surprising that both teams wanted to utilise them in order to hurt the opposition.

Brazil primarily focused on working the ball down the left-hand side to the vertical unit of Neymar, Coutinho and Marcelo. Phillipe Coutinho was allowed to drift out to his natural inside left position and freely rotate with Paris Saint-Germain player Neymar, always playing on opposite lines, and leaving the outside channel for Real Madrid player Marcelo to provide overlaps. They weren’t given much space by Belgium so needed to rely on intricate combination play in tight areas to work a shot or crossing opportunity.

This is in contrast to the Belgium front three of Lukaku, De Bruyne and Hazard. They were given similar amounts of freedom in possession to the Brazilian’s, with Lukaku playing as a wide forward and De Bruyne and Hazard able to roam wherever they saw fit. However, they played in vastly greater spaces so were able to be more direct and dynamic in their approach, constantly driving at Brazil’s disorganised defence.

It was ultimately Belgium’s front three who came out on top in this battle, with Lukaku getting the assist for De Bruyne’s goal and Hazard completing 100% of his 10 attempted dribbles.

Even though Brazil had 58% possession in the game, Belgium managed to control the majority of play without the ball due to their organised defensive structure. This was built on the numerical superiority gained from Belgium’s forwards pinning three Brazilian players back. This allowed Belgium’s defence to go man for man without the risk of being dragged out of position and no one covering them.

Belgium were well prepared for Brazil’s main threat down the left, deploying multiple layers to deal with Coutinho and Neymar cutting inside. Isolated against an individual, there is usually only ever one outcome when they get on the ball, but up against four players vastly reduced their threat and made it hard for them to create chances.

Brazil still did manage to get into dangerous situations, particularly in wide areas. But again, Belgium were well set up to deal with these scenarios. When defending the box, they were man for man and ensured gaps between the defensive and midfield units were tight, limiting the space for attackers to get shots off. They were also constantly prepared for the cutback, with defenders ready to step out and close down space.

As good as Belgium’s defence was on the day, Brazil did cause their own problems in possession. They had an over-reliance on attacking down the left, unbalancing their overall attacking structure. This under-resourced the right-wing, leaving Willian 2 vs 1 most of the time against Vertonghen and Chadli.

On the few occasions, they did find attacking equilibrium, balancing either side of attack, they managed to disrupt Belgium’s defensive set up. Committing numbers down the right, they managed to shift Belgium’s compact defence over, freeing up space for Neymar and co down the left.

This tactical analysis focused on the key tactics used in a hard-fought contest in which Belgium came out deserved winners, executing Roberto Martinez’s game plan to perfection.

It looked at how Belgium exploited Brazil’s shortcomings at the turnover and punished them in transition. It examined the team’s two dangerous attacking trios and the situations they played in. And lastly, it broke down how Belgium’s defensive organisation came out on top and controlled Brazil’s unbalanced attacking structure. 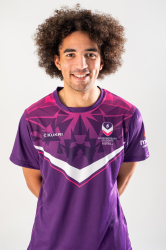 Joel Bonner
Joel Bonner is a Loughborough University student and currently doing his UEFA B license.